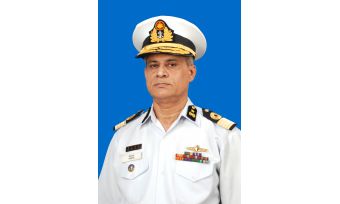 During the first IHO Assembly taking place from 24 to 28 April 2017 in Monaco, the represented Member States will elect the new Secretary-General and Directors. The nominees present themselves by answering the same 5 questions. This multi-interview is available at www.hydro-international.com/iho-2017. Commodore Mir Imdadul Haque (Bangladesh), nominated for Director, answers 5 questions.

The willingness of individual states is the key factor for applying the membership of IHO. Thus, I believe in increasing the number of IHO members through motivation / awareness. Thus, growing government eagerness of non-member states is the prime factor here.

It has been experienced that there are many coastal states of Africa and a few countries of America, Europe and Asia that are not well conversant or aware of the potentialities of the IHO. They also do not realise the requirement of hydrographic services for the use of their maritime resources; though their economy is in many ways dependent upon maritime activities. It has also been noticed that, due to the political crisis / instability of governments., many countries are not in a position to apply for IHO membership. Furthermore, there are a number of countries that  are not applying for membership due to their lack of knowledge on IHO activities and their preconceived ideas about the imposing of unbearable responsibilities by the IHO after obtaining membership. In view of the above, I think following steps may be considered to increase the number of IHO members:

The actions in fostering Hydrographic capabilities that could be taken are:

In my view, the best option is to highlight the achievements of the IHO in maritime affairs since its inception by presenting the facts and figures. At the same time existing limitations/shortfalls/hurdles are to be brought forward so as to obtain their assistance in this regard.

I would prefer to request PIs to increase publicity through effective demonstration of their products to earn the confidence of the hydrographic community. They will be advised to provide some products ’on a test’ basis. Later on, feedback reports from the users will be published in international fora for better understanding and confidence building of their products.

The general public can use marine spatial data in the following ways:

Commodore Mir Imdadul Haque, (H), ndc, psc, BN is the senior most hydrographer of Bangladesh Navy. As the director of Hydrography, he organises all sorts of hydrographic and oceanographic operations in the Bay of Bengal and Bangladesh waters.  He has 23 years of hydrographic survey experience from very conventional to modern digital surveys. With his relentless efforts, Bangladesh was able to introduce itself to the footstep of ENC production from ammonia print charts.