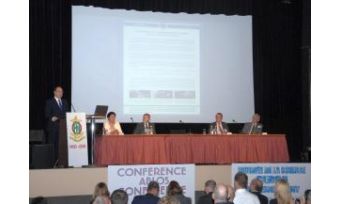 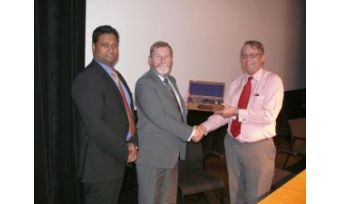 From 3 to 5 October 2012, the seventh conference of the IAG/IHO Advisory Board on the Law of the Sea (ABLOS) took place, in the Princess Grace Theatre in Monaco. This was the first time that the conference was not hosted at the International Hydrographic Bureau, but at the other side of the harbour. This allowed the conference to grow further. Another change was the combination with the GEBCO Science Day, on 2 October 2012. Participants of the Science Day were allowed to attend the conference free of charge, and the science day posters were on display during the ABLOS conference.

ABLOS was attended by geodesists, hydrographers, lawyers and other government officials with an interest in the technical aspects of the law of the sea. For many participants, it was not their first ABLOS conference. Personal friendships were reconfirmed, and new professionals were welcomed to the law of the sea community. For decades, Chris Carleton of the UK has been a central person in the community. After retiring from his position as head of the Law of the Sea department of UKHO last year, he also stepped down as chairman of ABLOS during the conference. IHO president Robert Ward illustrated his appreciation for the work of Chris by giving him some beautiful miniature geodetic attributes, which will allow Chris to continue his activities as a hobby. Chris was replaced by Sunil Bisnath, who was welcomed as the new chairman with a warm applause.

The conference was given the theme ‘UNCLOS in a changing world’. The theme was reflected in several levels: effects of physical change, developments in political claims and new maritime boundaries resulting from treaties and judgments of courts. Prof. Robert Beckman of the National University of Singapore addressed the fight for island territory in the South China Sea. This sea has many small islands, rocks and low tide elevations that are claimed by several States. They try to show sovereignty by reinforcing the land areas, proving that they can sustain human habitation and military presence. The situation is extremely complex, and seems unsolvable.

Two full sessions were dedicated to the judgment of the International Tribunal on the Law of the Sea (ITLOS) on the position of the maritime boundary between Bangladesh and Myanmar. Some speakers were directly involved as consultants for one of the parties, and others followed the process as it could impact future judgments of courts. Several speakers were critical about the procedure followed by the court. As a first step, the Tribunal did not determine an equidistance line based on all basepoints, but an equidistance line without effect of several basepoints. This novelty was seen as a danger to the transparency of the procedure.

There were also presentations about the effects of climate change, like melting ice in the Arctic and disappearing islands, and about the effects of other types of changes in the coastline. Authors spoke about requirements for technical experts, and about a single data format for maritime boundaries based on the IHO S100-series of formats. All contributions have been made available online at the site of the IHO.