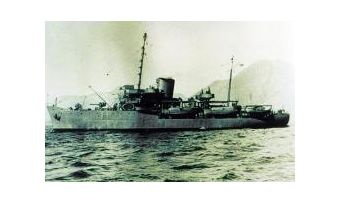 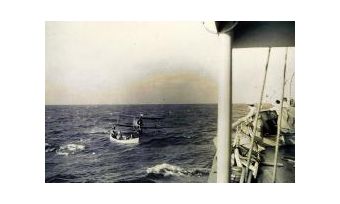 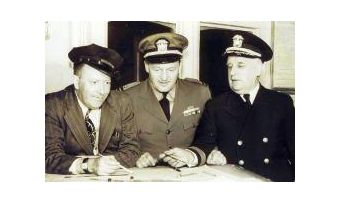 On 3 December 1941, the US Coast and Geodetic Survey (C&GS) Ship Explorer was conducting operations northeast of Midway Island in the central Pacific Ocean. Approximately 800 miles to the north a great fleet of Japanese warships was steaming to the east making preparations for ’a day that would live in infamy’. That morning, the Explorer was the closest United States ship to that fleet. By a quirk of fate, it finished its operations in the vicinity of Midway that day and set sail for Johnston Atoll, a small island approximately 750 miles southwest of Honolulu, Hawaii. During the next four days the small survey ship remained at approximately the same relative distance from the Japanese battle fleet until reaching a point approximately 120 nautical miles northwest of Johnston Atoll. In doing so, it placed itself unwittingly in a relatively safe zone between Pearl Harbor and an attack on Wake Island, further to the west, that began 11 December. The morning of 7 December at 0630 180th Meridian time (0830 Honolulu time) the ship’s radio operator began hearing reports of the attack on Pearl Harbor.

Attached to the Explorer as a young officer from Alabama, Ensign Fair J. Bryant, United States Coast and Geodetic Survey, who described the odyssey of the Explorer in returning to its home base of Seattle, Washington, in the early weeks of the Pacific War. His report to the director of the Coast and Geodetic Survey, rear admiral Leo Otis Colbert, captures the uncertainties, the fear, and sometimes near hysteria of these early days of United States participation in World War II. Much of the following is derived from his report.

On the morning of 7 December, the ship was 120 nautical miles NW of Johnston Island when it received its first report of the disaster at Pearl Harbor. By 10 that morning the Navy issued a broadcast for all American shipping to put in to the nearest friendly port. The Explorer continued on towards Johnston but soon the decision was made to proceed to Honolulu. Before diverting to Honolulu, 'All ports and windows above deck were painted over while those below deck were covered with the storm shutters. Lookouts were posted astern and on the compass platform and the watch officers and quartermaster took posts on the wings of the bridges where lookout could be maintained to best advantage. The boats were fully provisioned, their emergency equipment checked and navigating gear placed at hand. Two small depth charges were improvised, using the TNT carried aboard and the ship's arms, consisting of two .45 cal. automatic pistols and six .30 cal. rifles, were broken out, cleaned and loaded and placed to hand. Flashlights intended to be above deck were dimmed by painting over the lenses.' Bryant noted with ironic understatement: "The means available for defence were not hopefully regarded."

The next two days were spent in fearful suspense as the Explorer made its way to Honolulu. Numerous planes were spotted, all of which turned out to be American, and means were devised to communicate with these aircraft by hoisting signal flags with the ship's call letters. Invariably the planes approached from the sun. Fear of submarine attack permeated the ship. ‘The procedure established for the submarine alarm was for all hands not engaged in the operation of the ship to make their way to the superstructure deck with their life jackets prepared to abandon ship, while the helmsman was warned to shift to hand steering for an attempt to dodge and escape by zig-zagging.'

On the morning of 10 December, the ship was sixty miles from Honolulu when an object was sighted in the water 2 miles off the starboard bow. This turned out to be a Navy seaplane which had run out of fuel on a scouting mission. Unsure of its nationality, the ship maintained course and speed until able to ascertain that it was a US Navy plane. The occupants of the seaplane in turn were firing machine gun bursts to attract attention. Bryant described a submarine scare as the ship was approaching the plane: "As the ship was turning the lookout on the compass deck reported an object on the port beam believed to be a submarine. The submarine alarm was sounded and the ship continued to turn away. The object sighted was soon identified as a floating ammunition box but as it was necessary to heave to in dangerous waters the crew were kept at abandon quarters for the time being." The aviator, a lieutenant Thornton, and his radio operator were taken from the plane and brought aboard. Both had given up hope of being rescued when the Explorer happened along. Thornton wished to save the plane and went back and secured a line. Manoeuvering the ship resulted in the line coming taut and overturning the aircraft. Fortunately for the pilot, he was able to scramble free of the aircraft and was picked up by the ship. After giving up hope of saving the aircraft, the ship proceeded to Honolulu.
After the submarine nets of the harbour entrance were lowered, the little ship entered the harbour and berthed at Pier 12 at about 1700. Honolulu was a significantly changed city compared to the previous visit. In Bryant's words, "The city and environs were completely blacked out after nightfall and throughout the night rifle fire, single shots and volleys sounded almost continuously. At about 2200 the glow of a large fire, apparently a cane field burning, was seen on the outskirts of town. Until about 13 December a scattering of rifle fire was heard throughout each night, apparently from nervous sentries."

The Explorer remained at Honolulu until 3 January 1942, when it departed for San Francisco with a naval convoy. The trip was uneventful except for endless zig-zagging and one evening in which the visibility was so poor that the Explorer lost the rest of the convoy and had difficulty finding it the next day. The convoy entered San Francisco Bay on 13 January, where the Explorer stayed until 17 January when it led a convoy of merchant vessels up to Seattle, then home port and West Coast ship base of the C&GS. The ship arrived at its homeport on the afternoon of 21 January.

The USC&GS Ship Explorer survived the war and spent much of its operational time engaged in surveys in the Aleutian Islands. This was not without its dangers as the Japanese had captured the island of Attu and Kiska in the western Aleutians. The Explorer came under fire from a Japanese war plane at least once but with no casualties. Following the war, the ship continued operating in Alaskan waters until 1960 when it was transferred to the Atlantic Coast and converted to an oceanographic vessel conducting studies throughout the North and Tropical Atlantic Ocean. The ship was decommissioned in 1967.

Upon return to the United States, Ensign Bryant was transferred to the United States Army as were many of his fellow C&GS officers. It was the intent of the law forming the commissioned service of the C&GS in 1917 that officers could be transferred to the other services requiring their technical expertise in the event of a national emergency. This law is still in effect for today's NOAA Corps, descendant organisation of the commissioned service of the C&GS. During the First World War approximately half of C&GS officers were transferred into the Army, Navy, and Marines. This same ratio held true during the Second World War and C&GS officers served as Army and Marine artillery surveyors, regimental navigators and hydrographers for the Army, amphibious engineers, Navy hydrographers conducting surveys in support of tactical ship operations and amphibious operations, cartographers and surveyors for the Army Air Forces, and geophysicists and scientists for Army and Navy scientific studies and developments. Their fellow officers who stayed on the home front, made tens of millions of charts for the Allied Forces, conducted surveys for military operations from Maine to Attu, and provided technical expertise in many realms for the defence effort.

In December of 1944, then Major Fair J. Bryant was the survey officer of the 285th Field Artillery Observation Battalion. The observation battalions were lightly armed units that provided survey support for all heavy artillery and counter-battery target acquisition by sound and flash-ranging methods for a specific Army corps. On the morning of 17 December, Battery B of the 285th FAOB was travelling to St. Vith to take up new positions. It encountered the lead element of a German heavy armoured division that was the spearhead for the German attempt to split the Allied forces and capture a seaport at the beginning of the Battle of the Bulge, 83 defenseless men of Battery B were executed by machine gun fire at what came to be known as the Malmedy Massacre. Fortunately for Bryant, he was with Battery A of the 285th FAOB on that particular day. Battery A moved down into Luxembourg and fought through the Battle of the Bulge. It is probable that Fair J. Bryant was one of the few individuals in the service of the United States that was in close proximity to Pearl Harbor and then ended up in the Battle of the Bulge. In particular, it is ironic that he was so close in time and space both to the attack ' that shall live in infamy' and the Malmedy Massacre, the worst atrocity committed against American troops in Europe during the Second World War.