Acoustic seabed classification is becoming increasingly important for many fields, including marine geology, hydrography and navigation, coastal engineering, environmental sciences, marine biology and fisheries. The main advantages over conventional bottom grabs are the continuous, non-invasive probing of the seabed and a vast reduction in survey time and costs. The difficulty of acoustic methods is associated with complicated acoustic wave scattering off the rough and layered seabed, which makes interpretation of the received signals cumbersome. In other words: how do we retrieve bottom type from the echo characteristics? This is why acoustic seabed classification is still the subject of extensive research.

Classification methods for single-beam echo sounders are of particular interest owing to their simplicity and versatility. Over the past 15 years various approaches and algorithms have been developed, some of which are commercially available. Such classification tools can be considered as cost-effective add-on modules to existent sonar systems.
Among the available seafloor classification systems we have RoxAnn, which uses the energy of the first and second bottom returns, and QTC, which applies principle component analysis to the first bottom return. Another approach treats the echo signal as a statistical distribution with corresponding statistical moments. Other approaches include the calculation of fractal dimensions and the use of neural networks to discriminate between sediments. Classification with all of the above methods ultimately depends on cluster analysis to find groups of echoes with similar features. A complication is that ground truthing is required to calibrate the classification system. The need for calibration may occur repeatedly, e.g., when one changes to a different sonar system or environment.
Model-based classification methods suffer less from the calibration problem. Here, measured echo signals are compared with modelled echo signals taking into account sonar characteristics like source level, pulse duration and beam pattern. The Underwater Acoustics Group of TNO Physics and Electronics Laboratory has developed powerful seabed classification algorithms for all kinds of sonar, including the standard single-beam echo sounder, forward-looking sonar, and side-scan sonar. Classification algorithms for Multi-Beam Echo Sounders (MBES) are in a development stage. The prospect of seafloor characterisation with MBES is quite appealing, as a broad strip of the seafloor can be mapped with a single sailed track.
In the following, one of the developed model-based classification methods for single-beam echo sounders is illustrated with results from sea trials.

Step 1: Determine reflection coefficient R for each echo
At normal incidence, as in the case of the standard downward-looking echo sounder, there is a contribution of specular reflection to the echo energy. The method assumes that this contribution dominates. In this case the normal-incidence reflection coefficient R is determined from the energy balance between the received energy ERX and the transmitted energy ETX.

Step 2: Calculate corresponding mean grain size for each echo
The mean grain size Mz is calculated with the help of empirical equations which relate Mz to R. These equations describe the properties of the top few centimetres of sediment and thus are appropriate for the high frequency associated with the echo sounder data.

Step 3: Calibration
When the transmitted energy ETX is precisely known, the value of R can be determined directly from the echo energy ERX. If ETX is unknown, a calibration procedure must be carried out. For this purpose, a subset of the echo signals is considered from a part of the track where the sediment type varies slowly with position. To determine a calibration factor, the Mz of this subset are matched to bottom grabs at that position or to an existing geological map. The calibration factor determined in this manner is subsequently applied to the whole set of echoes to convert their energies into mean grain sizes.

Marine Geology
Sediments can be classified in many ways. A scheme that is familiar to marine geologists uses the so-called Folk classes, which are based on the relative amounts of gravel, sand and mud, see Figure 1.
Gravel is defined as those grains larger than 2mm, whereas the mud class covers all grains smaller than 63µm. In this case no distinction is made between silt and clay, which are subdivisions of mud. In between the mud and the gravel, between 63µm and 2mm, there is sand, which can be subdivided into five subclasses, see Table 1.

Sea Trial and Results
Echo sounder signals were recorded on the North Sea during sea experiments in October 2000. The sounder frequency was 150kHz. A track with ten longitudinal legs was sailed, covering an area of roughly 10´10 nautical miles. Figure 2 shows the legs superimposed on a map of the trials area. This map, which dates from 1987, exhibits the sediment classes according to the Folk diagram in Figure 1.
Up-to-date ground truthing was accomplished with fifty bottom grabs (Figure 2). The sampling depth of the grabs is approximately 20cm, which is large compared to the acoustic wavelength and penetration depth of the 150kHz sonar.
Grain size distributions of the grabs were determined with an optical-microscopy laboratory analysis. Subsequently, a Folk class could be assigned to each bottom grab, as shown in Figure 3. Note that the Folk class deviates from the 1987 geological map in Figure 2 for nearly half of the bottom grabs. In addition to the Folk class, the mean grain size of the grabs was determined, see Figure 4.
Finally, the acoustic classification results obtained with the method described in paragraph 2 are shown in Figure 5. Since the transmitted energy ETX of the echo sounder was not known, the required calibration was carried out with a few grabs in the mud area.
Note that there is a remarkable resemblance between the ground truthing (Figure 4) and the acoustic results (Figure 5). Moreover, both figures confirm the occurrence of coarse material (sandy gravel) in the lower left-hand corner of the trial area, which is absent from the 1987 geological map (Figure 2).

Summary
A simple bottom classification algorithm for single-beam echo sounders is presented and tested against experimental data obtained in a North Sea area. The trials area shows a large variation in sediment type, which ranges from very soft and flat (muddy) to hard and rough (gravelly).
The classification method is model-based and assumes that the contribution of specular reflection to the echo energy dominates. It accounts for the sonar setting parameters and hence suffers less from the calibration problems usually encountered with acoustic classification systems. If the transmitted energy of the echo sounder is not accurately known a calibrating ground truth is required. The algorithm provides grain size maps that may be used directly by the end user, e.g., a marine geologist.
Excellent agreement is obtained between the acoustic classification results and up-to-date bottom grabs and geological maps. At present, the algorithm is being validated using experimental data from other trials, i.e. for other sounder frequencies and environments.

Acknowledgements
The authors thank the trial vessel crew for assistance during the sea experiments. The help of the Netherlands Institute of Applied Geoscience TNO is acknowledged for the grain size analysis of the bottom grabs. 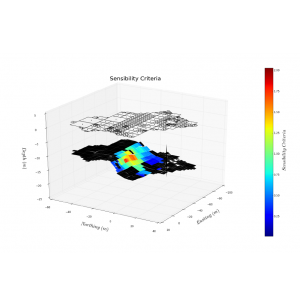