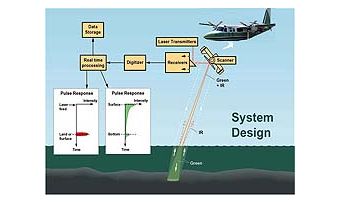 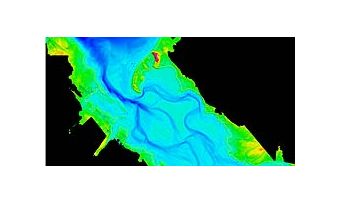 Seabed mapping in the near-shore marine environment is as vital as it is difficult. The Geological Survey of Ireland therefore turned to airborne remote sensing to perform bathymetric mapping of Ireland’s most critical shallow-water zones. As part of the Irish National Seabed Survey in 2008, Blom Aerofilms was contracted to deploy its Hawk Eye II bathymetric LiDAR system to create subsurface topographic maps. Data were acquired in three bays that presented significant challenges to traditional ship-borne seabed mapping and in a fraction of the time that surveying by ship would have required.

Subsurface topographic mapping has emerged as an important market for remote sensing technology. Many onshore mapping projects no longer end at the water's edge due to the inherent interaction of land and sea environments. Along with its growing importance, seabed mapping has demanded the implementation of faster, safer and more cost-effective survey technologies. In 2007, Blom Aerofilms acquired the Hawk Eye II system as the ideal dual-use solution for making both land and subsea mapping viable in an operational mode for the many end-users whose applications span the coastal boundary.

The Geological Survey of Ireland (GSI) initiated the Irish National Seabed Survey (INSS; 81) in 1999, a major programme to digitally map the entire seabed lying beneath the nation's territorial waters. The first phase of the INSS focused on deep-water mapping in the outer margins of the territorial seabed. This phase relied on research vessels that were especially designed to perform bathymetric surveys using technologies such as acoustic multi-beam echosounders and sub-bottom profilers. These data are being used for a wide variety of applications including environmental assessment, commercial fishing licensing, engineering planning and other coastal zone management activities.

The INSS moved into its second phase in 2006, focusing on the near-shore zones. Referred to as INtegrated mapping FOr the sustainable development of Ireland's MArine Resource (INFOMAR), this phase concentrates primarily on 26 bays considered to be biologically sensitive. Accurate mapping of these areas is crucial because of their environmental and commercial value. While teeming with a rich diversity of sea life, these near-shore zones are often the focal points of recreational activities, commercial fishing and natural resource exploration. Managing these competing interests requires an up-to-date database of geological and biological information referenced to an accurate topographic seabed map. Based on the INFOMAR data sets, the GSI plans to publish a series of digital bathymetric, seabed geology and habitat maps; many of which will be available for download from the internet.

INFOMAR has deployed its research vessels to conduct bathymetric surveys where practical, but such mapping in the shallow waters of inshore areas faces two crucial difficulties. The first is safety. At a water depth of 10m or less, standard bathymetric vessels run the risk of grounding. Smaller launches are just as likely to be scuttled in the wavy surf or snagged on the jagged rocks typifying the Irish and other Northern European coastlines. The second issue is efficiency and cost-effectiveness. As water becomes shallower, the coverage area of a bathymetric system is drastically reduced, meaning that less seabed area is covered in a single pass of the boat. This makes ship-borne bathymetric surveys extremely time-consuming and expensive in shallow waters.

Developed jointly by Saab Aerospace and the UK Hydrographic Office, the Hawk Eye II bathymetric Lidar system was designed specifically for seabed mapping near the land-water interface. Prior to its purchase by Blom Aerofilms, the system scored a proven track record of successful applications worldwide. While traditional terrestrial Lidar systems have met limited success in subsurface marine mapping, the Hawk Eye II offers an entirely different design with three sensors - two lasers and one digital camera - acquiring data simultaneously. It is the only bathymetric Lidar in operation with this configuration of sensors.

The secret of its ability to accurately differentiate the land-water boundary and map the seabed terrain is the use of two Lidar sensors, one for terrestrial mapping and the other for bathymetry. The terrestrial Lidar operates at the infrared (1,064nm) wavelength at 8kHz, capturing 8 returns per pulse or 64 per second. The bathymetric Lidar transmits a pulse, split 75% in the green (532nm) portion of the spectrum and 25% at the infrared wavelength (Figure 2), to obtain data from the water's surface and the seabed. The green pulse penetrates deep into the water, down to 40m in clear conditions (or about 2.5 times the visual sight depth), and captures up to 4 returns from each transmit pulse at 1kHz. Point spacing varies from 1.8 to 3.5m depending on flight altitude. The two-megapixel digital camera is used for processing and quality control of the Lidar data.

The three bays assigned to Blom Aerofilms in 2008 - Donegal, Sligo and Greatmans (Figure 1, map top of this page) - represent some of the most difficult bathymetric mapping conditions found in Northern Europe. Greatmans Bay, for example, is an extremely rocky estuary, while Donegal and Sligo Bays are both mud-flats with long stretches of very shallow tidal water. In both types of environments, wave and tide action can make the water turbid, a challenging condition - even for Lidar.

Blom Aerofilms completed the bathymetric Lidar acquisition over the three project areas, which totalled 200km2, in less than 40 flight hours during a 10-day period in the spring of 2008. The project was flown with an Aero Commander 690 twin-engine turboprop, operating at an average speed of 150 knots. System technicians chose a flight altitude of about 400m to achieve a 3.3m point spacing. This provided a single-pass swath width of 180m. During flight planning, the decision was made to deal with the challenges of the broad mud-flats in Donegal and Sligo (Figure 3) in the acquisition phase, while the rocky bottom of Greatmans Bay would be handled in the processing.

The Hawk Eye II performs well at either high or low tide. However, because the mud-flats of Donegal and Sligo (Figure 4) contain long stretches of muddy water averaging only 1m in depth at high tide, the team tried a new approach. A water depth of 1m or less causes interference in the laser signal returns from the surface and seabed, making it difficult even to distinguish between land and water. To eliminate the interference, two passes were flown over flight lines in the shallowest areas, one each at high and low tide. The seabed was completely exposed during low tide, providing direct measurement of the very shallow seabed terrain. Normal operating procedures were used for mapping sections of the bays where water depth exceeded 1m.

The rocks of Greatmans allowed the Blom Aerofilms Lidar processing technicians to demonstrate the importance of simultaneous digital image acquisition. In rough seas, the white water created by wave action can inhibit Lidar penetration and cause backscatter noise, which is usually removed in processing. In estuaries such as Greatmans, however, a rock just below the surface can create a similar signature. Since it could be tragic to remove the rock from the subsurface terrain profile in the data set, the technicians manually cross-referenced each Lidar distortion with the digital photograph to identify real rock outcrops.

At the time of writing, Blom Aerofilms had completed processing all data sets and begun delivery of the end-products to Tenix LADS, the project prime contractor. The initial reaction from the Irish government was extremely positive. The GSI had requested Blom Aerofilms to map the seabed terrain in each of the three bays to a depth of 10m with a vertical accuracy satisfying IHO Order-1 specifications. The Hawk Eye II exceeded each of these parameters, delivering 20-30cm vertical accuracy at depths down to 15m with the desired posting. Perhaps most importantly, the project was carried out safely without loss of life or equipment. Blom Aerofilms estimates the aerial bathymetric Lidar completed the mapping acquisition in roughly 3% of the time that traditional survey ships would have required, making the Hawk Eye II an extremely cost-effective mapping solution.

The author wishes to thank Dushan Arumugam, Hawk Eye II Project Manager at Blom Aerofilms, for contributing his technical expertise to the content of this article, and acknowledge the important role of Tenix LADS, a bathymetric Lidar company based in Australia, which served as the prime contractor on this project.