With the growth of air traffic following the First World War, it was inevitable that aircraft would be lost over the oceans. It was equally inevitable that hydrographers would be called into humanitarian service to help with both search and rescue and, sadly, in the recovery effort associated with such disasters. The following is the story of one of the earliest attempts to find and recover an aircraft and its occupants that were lost at sea.

A rich and powerful man's son plummets from the sky off the coast of Massachusetts (USA) pre-cipitating a media frenzy and a massive search effort for the remains of his aircraft. Sixty-seven years before the well-known aircraft disaster involving John F. Kennedy Jr, another accident occurred off the coast of Massachusetts and captured the attention of much of the USA. Edward Mallinckrodt 3rd - namesake of both the founder, Edward Sr, and the then second chairman, Edward Jr, of Mallinckrodt Chemical Works - was piloting a small private aircraft off Nahant, Massachusetts, on the afternoon of 29 December 1932. At about 4:00p.m., his plane was observed in a tailspin coming down from about 2,000 feet elevation and crashing into the sea approximately three-quarters of a mile off Bass Point, Nahant - just to the northeast of Boston.

Young Mallinckrodt was in his freshman year at Harvard University and had a passenger with him, Donald McKay Frost, descendant of a long line of New England seafarers including the famous clipper ship builder Donald McKay. Upon news of this crash, the Mallinckrodt family made a determined effort to recover Edward, including offering a substantial reward for recovering his body for proper burial. In contrast to this, the family of young Frost, coming from generations of seafarers, was satisfied to consign Donald's body to the deep.

Because of the reward, many individuals attempted to find the aircraft with all manner of cables, grapnels and sweeping devices. Mallinckrodt's father even hired a diver and a boat equipped with newly developed undersea lights that allowed a diver to see 10 to 12 feet in the murky waters off Nahant. All of this was to no avail and the desperate father approached Raymond Stanton Patton, the director of the US Coast and Geodetic Survey (US C&GS), for assistance. Patton consulted with commander Nicholas Heck US C&GS, then the chief of the Division of Terrestrial Magnetism and Seismology, as to the best manner to find a sunken plane. Besides having been instrumental in the development of radio-acoustic ranging (RAR) as noted in the January/February issue of Hydro international, Heck was also quite active in the early development and improvement of wire drag by the C&GS.

Wire drag was a system that utilised two boats to drag a wire set at a preset depth between them. Buoys attached to the wire would suspend the wire at this preset depth. If an obstruction was encountered, the wire would ‘hang' and the buoys would align themselves in a V-shaped pattern pointing directly at the obstruction. The system did not originate with the C&GS but evolved from a French method that was first used in the Gulf of Tonkin in 1882. The French system was not towed by boats but was set out to drift with currents through a given area. Upon encountering an obstruction, the wire would form the above noted V-shaped pattern leading directly to the obstruction. In 1902, engineer Francis C. Shenehon of the US Lake Survey, an organisation charged with surveying the US waters of the Great Lakes, combined the wire drag with power boats for towing the wire in the relatively weak currents of the lake. This system was then adapted and modified by the C&GS under Heck's guidance.

It was claimed that Heck had an almost mystical ability to find pinnacle rocks and shoals by means of the wire drag. The next week would test this ability. As there was no appropriation, Mr Mallinckrodt agreed to pay all costs associated with the C&GS searching for the aircraft. As a result, Heck found himself in Boston at 7:20 a.m. on 6 January beginning operations. An agreement had been reached with the US Coast Guard to use two of their 78-foot patrol vessels as the drag boats. What wire drag equipment that was available was shipped to the site and loaded on the boats. Heck had two C&GS officers assigned to help him, who assisted with navigation and boat operation while he oversaw the whole operation. Only one of the accompanying officers had wire drag experience and none of the Coast Guard personnel, so it was up to Heck to improvise all aspects of the operation.

Within a few hours of Heck's arrival in Boston, he had arranged wire drag equipment on the vessels, instructed the crew in the use of the equipment and commenced dragging. The problem in conducting the drag was to attempt to keep the wire close enough to the bottom to catch on the airplane, yet not so close that the drag was continually catching on rocks. The water depth in the area off Bass Point was approximately 23 feet but there were numerous small rocks protruding above the bottom and a charted 18-foot rock was at the south end of the area to be swept. Heck set the initial drag so as to sweep a few feet off the bottom but decided that he should lower the drag slightly. He went out in a skiff from one of the Coast Guard boats and, while attempting to adjust the length of a buoy line, he caught his finger in the hand crank of the weight-lowering machinery and dislocated a finger.

In spite of this injury, he kept the boats working and within a short while a ‘hang' was observed. Mallinckrodt who had been on site observing from a rented tugboat with a hard-hat diver asked to have the diver put over in the vicinity of the hang. This was done and apparently the diver did not see anything in the murky water. This ended the day as the tugboat wrapped the drag wire around its propeller and it was 9:00 p.m. before this was resolved.

The following day, there was a gale and no work was done. However, on Sunday the drag boats and the rented tugboat proceeded to the site of Friday's hang. An oil sheen was noted at the site and the diver was put over once again. This time he returned in five minutes with a piece of canvas from the aircraft and the search was ended. The diver noted that the wire had caught on the airplane's tail approximately 8 feet above the bottom. Ironically, only the body of Donald McKay Frost was initially found in the aircraft, although the younger Mallinckrodt's body was later found. A remarkable fact concerning these events was that Heck located the plane on his first pass in spite of the inexperience of the boat crews and the improvised wire drag equipment. This is a tribute to both his instinct as a hydrographer and his long years of experience in developing and operating the wire drag system.

Nicholas Heck passed away in 1953. He was memorialised by the naming of the National Oceanic and Atmospheric Administration (NOAA) ship Heck in his honour, Heck Seamount and Heck Seachannel in the north Pacific Ocean and Heck Canyon in the Bering Sea. The ship was built in 1966. This was particularly appropriate as it was one of two wire drag vessels designed to operate together. The ship Heck was decommissioned in 1995 but its sister ship, NOAA ship Rude (pronounced Roo-dee), was instrumental in finding both the doomed TWA Flight 800 aircraft in 1996 and the 1999 John F. Kennedy Jr aircraft that crashed in Vineyard Sound, Massachusetts, less than 100 miles from the site of the 1932 Mallinckrodt crash site.

The Making of an Earth Measurer 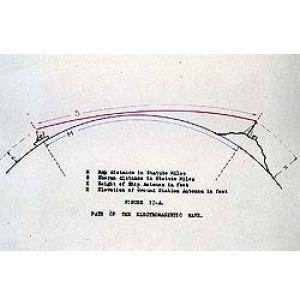 First Developments of Electronic Navigation Systems
'As it Was'
Latest article