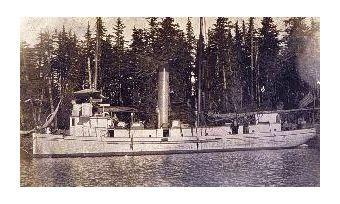 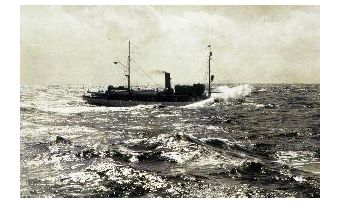 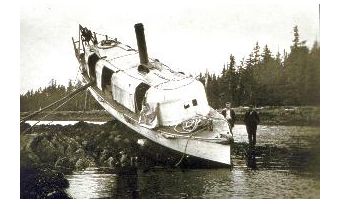 At the turn of the century, the West Coast fleet of the Coast and Geodetic Survey was comprised of a mélange of ships, some of which were not retired until they were nearly 40 years old . The largest of these ships was the 163-foot barkentine-rigged steamer Carlile P. Patterson, built in 1883; the smallest was the Taku, a 70-foot vessel that looked like it was built around its smokestack. Following World War I, most of this small fleet was replaced by relatively modern vessels. During this era, ship bridge equipment was woefully inadequate and generally consisted of a magnetic compass, wheel, and spittoon.

With the exception of the Yukon and Taku (image) which were winterised and hauled ashore in Alaskan ports, the remainder of the fleet made an annual round trip from Seattle, Washington, to the working grounds of Alaska. The lucky ones went to survey areas in the great labyrinth of the Inside Passage, although that was not without its hazards. For those headed to Southwest Alaska or the Aleutians, they would take departure at Dixon Entrance or Cape Spencer and fight their way across the Gulf of Alaska.

Portholes often leaked or were broken during the crossing, dousing many an officer or crewman with cold North Pacific waters. At least one crewman was washed overboard during these crossings and lost at sea. Upon arriving at the working grounds in the spring, it was not uncommon to find at least six feet of snow covering the mountains and shoreline making horizontal control work impossible. Emphasising the remoteness of the work, Dutch Harbor, a major Aleutian port today, had a population of three when the Patterson fueled there in 1908. Adding to the difficulties, the southern Alaskan coastline is ironbound with mountain ranges coming right down to the sea. The well-known Aleutian Low spawns storm after storm; and the williwaws (downslope katabatic winds similar to the foehns) would strike with little warning and suddenly there could be winds gusting over 100 miles per hour.

Into this environment came the rickety little survey ships. Their first task was to put out shore camps with supplies for two or three weeks. The shore camps consisted of an officer, two or three crewmen, and sometimes a camp cook. These small crews were responsible for building and determining the position of visual signals for ship and/or launch three-point sextant-controlled hydrography and also to establish signals for conducting plane-table topography.

Insight into the work can be gained from the diary of William Scaife, a young officer put ashore from the ship Surveyor at Cape Kekurnoi on the north side of Shelikof Strait on 12 May 1920. It was calm the day they landed but that night a howling gale began that blew spray and sand over the camp. The wind made it impossible to accomplish anything. Scaife was destined to spend until at least early August (his partial diary ends abruptly on 31 July 1920) there conducting triangulation work, topography and magnetic observations. Spring snows, sub-freezing temperatures, roaring gales off the ocean, fierce williwaws, pelting rain and fog all added to the frustrations of completing the work. His experiences were a microcosm of the coast sursveyors who worked in Alaskan waters.

Glaciers, curious bears, volcanic eruptions, mosquitoes and biting gnats added to the obstacles facing those who surveyed Alaska's shores and waterways. On occasion, collapsing glacier fronts caused large waves in inlets forcing topographers to run for their lives; while, if the glacier front was on land, there were instances where large blocks of ice fell endangering the surveyors. The 1912 eruption of Mount Katmai covered a survey ship with volcanic ash as have other lesser eruptions along the Alaska Peninsula and in the Aleutian Islands.

In the years before WWI, the crews of the vessels were sometimes the main problem facing a ship's command. Poor pay relative to commercial vessels almost assured that the worst of the worst made up some of the C&GS crews. Drunkenness was rampant, and on one occasion a crew refused to sail unless allowed to bring whisky aboard. This minor mutiny resulted in the crew being left at a small Alaskan port to find their way back to Seattle, but discharging a crewman in Alaska invariably weakened the ability of the survey ship to conduct its operations as it was impossible to find replacements.

The hydrographic survey crews that operated off the ships in small steam launches were also beset with difficulties including hidden reefs, pinnacle rocks, rogue waves and in certain areas up to thirty-foot tides. If a launch was stove in or swamped, it could be hours or sometimes days before assistance would arrive, particularly if the launch party was working detached from a mother ship. Because of these dangers, a number of features in Alaskan waters were named for those who gave their lives in surveying its shores. Bowen Anchorage, Sundstrom Island, Reese Bay, Mueller Cove, Rudisell Reef and Koss Cove are among geographic features named for coast surveyors who died in the line of duty in Alaskan waters.

Although ships and shipboard conditions have greatly improved with helicopters transporting surveyors in minutes to locations that would have taken hours, if not days, of packing; aerial photography and photogrammetry have replaced the plane-table for obtaining shoreline topography; and modern navigational systems have eliminated much of the need for establishing local horizontal control; there remain thousands of miles of inadequately surveyed Alaskan shoreline and adjacent waters. The Aleutian Low still dominates much of the southwest Alaska weather, rain and snow are prevalent throughout much of the working season, williwaws still roar down the mountains, and rogue waves and pinnacle rocks remain dangers to the survey launches. Alaska remains a frontier area for the hydrographic surveyor.