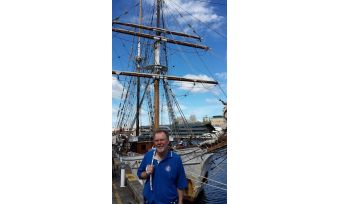 In his column in 'Hydro International', Mark Sinclair from Fugro writes that he commends the ‘Technology in Focus: Bathymetric Lidar’ article; it is right on the money. Amongst other things, it describes the crucial factors leading to a successful ALB survey as being water clarity management and the knowledge and experience of the operator. Read on for Mark Sinclair's own thoughts.

I wholeheartedly agree. Without doubt, one of the key success factors is an effective ‘Turbidity Management Plan’, as poor water clarity management is highly detrimental to effective ALB operations. Regarding the experience of the operators, it is now possible for almost anyone to lease an ALB system on a project by project basis. However, this ad hoc approach creates significant project risk due to inexperience.

Later in the article, the term ‘full insonification’ is used with reference to the ALB coverage of the seabed. I think this acoustic terminology should be replaced with ‘full illumination’. Confusion between electromagnetic and acoustic technology also occurs in specifications; for example, reference to 3 pings in an along-track and across-track direction. I remember this input was used to determine the speed to tow a side-scan sonar based on the acoustic horizontal beam-width and distance of the target. Apart from water clarity, the next most significant factor affecting the performance of an ALB system is the laser power; increasing ALB data density can be a poor trade-off when it comes at the expense of laser power, which is mostly due to the requirement of maintaining eye safety.

The selection of the appropriate standard is also worthy of discussion. IHO Order 1a is designed for areas where under keel clearance and the existence of man-made or natural features is of a concern, however this standard often seems to be specified over general areas where under keel clearance is not a concern. Although for most MBES systems there is little difference between conducting IHO Order 1a and 1b surveys in shallow water, standards should be selected and specifications designed to meet the survey requirement and be independent of specific technology.

Coming back again to the Technology in Focus article, it also discusses deploying multiple ALB sensors in an aircraft, which is an increasing and beneficial trend. Deploying high-density shallow and high-power deepwater systems in combination enables the shoreline and shallow water to be captured in great detail and also provides continuous coverage extending to the deeper water. When high-density imagery is also captured, this configuration is ideal for many applications in the coastal zone. Although these ALB systems are very capable tools in themselves, the ultimate solution is to combine these systems with MBES. The optimum approach is to deploy a combined shallow / deep ALB capability first to survey the coast and shallow water and identify all the dangers, and then employ MBES to survey the adjacent deeper waters, fill in any gaps in the ALB coverage, investigate critical shoals where required and collect data to higher standards in critical navigation channels and berthing areas. Vessels can also conduct the in-situ measurements, including  geodesy, tides, tidal streams, navigation aids and seabed samples, and make observations to update the pilot. Now this approach is what our standards and specifications should encourage!

Mark Sinclair works for Fugro as the Service Line director Hydrographic Services Asia-Pacific. He is also a competitor in the 2018 Golden Globe Race.