Mapping the American and Canadian Continental Margins Around the North Pole 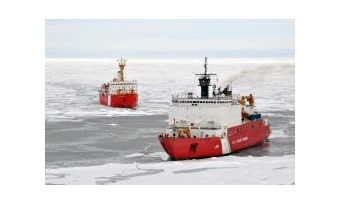 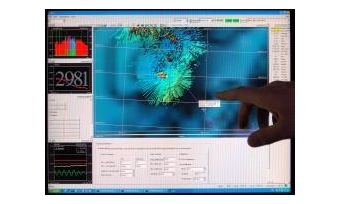 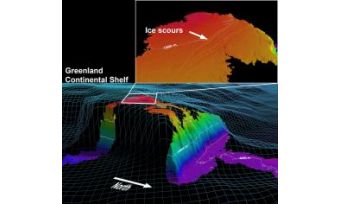 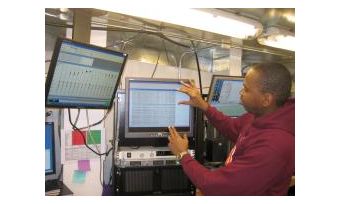 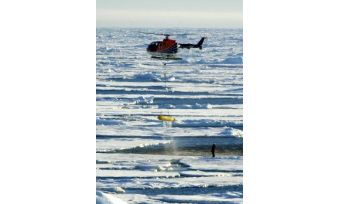 For the third consecutive summer, the United States and Canada teamed up with their icebreakers in August to tackle the technical aspects of mapping their continental margins in the Arctic Ocean. However this time they included in their survey a zone of dispute that was much closer to shore.

The teams reported that the two previous joint expeditions with the U.S. coast guard cutter Healy and Canada's Louis S. St-Laurent icebreaker have tripled the amount of bathymetry and seismic data collected from the western Arctic. "Last year's survey was extremely successful, and the ice conditions permitted the ships to collect 40 percent more data than we expected, and we've managed to get all the way up to high latitudes, as high as 84 degrees north," explained Jacob Verhoef, director of the Geological Survey of Canada (GSC) at a press conference on 26 July. "Now we're filling in some of the holes in the coverage," he told Hydro International.

One of those holes is a pie-shaped wedge jutting out 200 nautical miles from the Yukon-Alaska border. In the 1970s, Canada claimed its Exclusive Economic Zone continued straight
off the coast along the 141st meridian, which is the traditional terrestrial boundary. The United States argued instead that the line should be drawn equal distance between each country's closest shoreline out to the 200 nautical mile limit. Considering the shape of Alaska's North Slope, that pushed the boundary an additional 21,500sq km east of the meridian, giving the U.S. a larger piece of the southern Beaufort Sea. But as the countries are now working to extend the limit of their continental shelf under Article 76 of the United Nations Convention on the Law of the Sea, the United States and Canada are finding themselves in a role reversal. Further out to sea, if the United States method of defining the maritime boundary is applied, then Canada's Banks Island comes into play and shifts the disputed zone to the west of the meridian, in Canada's favour.

During the press conference with Verhoef and other representatives from the two Arctic states, Canadian diplomat Allison Saunders revealed that on 22 July, advisors from the U.S. Geological Survey and the Canadian Hydrographic Service met in Ottawa to discuss the issue of the disputed zone with foreign affairs and government officials. The meeting she said took place under the approval of U.S. Secretary of State Hillary Clinton and Canada's Foreign Affairs Minister Lawrence Cannon. The experts plan to meet again in early 2011 in Washington, D.C. to discuss the results of this summer's cruise.

"It will be a very interesting question as to whether this data will be made public like all the other bathymetry we have collected," commented Larry Mayer to Hydro International. Mayer served as chief scientist on the Healy during the previous two expeditions and is director of the Center for Coastal and Ocean Mapping in Durham, N.H. "I am not sure how data from the disputed area will be treated," he acknowledged. "We will get the data at the end of the cruise and can process it relatively quickly." Currently all of the bathymetry data that the Healy has collected using its multi-beam echo sounder is available online, whereas the data from the seismic surveys collected on board Canada's Louis S. St-Laurent are not yet public. "I should say that processing is one thing. Analysis is another. The analysis with respect to potential submissions is a longer process," Mayer added.

Though the United States will receive a copy of the seismic data as well, it will be up to Canada how to share it. Verhoef says that the seismic data is also shared through workshops where experts from other Arctic States, such as Russia and Denmark, have a chance to review it. "After we have done the analysis it will eventually become public information," he says.

Canada has until the end of 2013 to make its submission to the U.N. Commission handling the proposals. Norway, which ratified the convention in 1996, submitted its proposal in 2006 and received a positive recommendation from the Commission in 2009. The Norwegian continental shelf off mainland Norway, Svalbard, and Jan Mayen, is now recognised to cover about 235,000 square kilometres beyond 200 nautical miles offshore and reach as far as 85 degrees north latitude and depths of 3,000 to 4,000 metres.

The United States has not yet ratified the convention. But Margaret Hayes chair of the U.S. State Department's Extended Continental Shelf Task Force indicated that the U.S. might consider other options. "The existence of an extended continental shelf does not depend on a coastal nation having joined the convention. So it's possible that there are other ways to establish what the outer limits might be." She did not elaborate on what those other options are, and instead stressed that "the U.S. administration, the State Department, all the agencies involved, much prefer that we go about this as a party to the convention."

Still there is a long ways between research, negotiations, and actual use of resources. "Around Greenland there is a lot going on, even now, but the central Arctic is an area that is very difficult to access and it is going to continue to be like that for a long while," Martin Jakobsson of Stockholm University told Hydro International. In March, Canwest News Service revealed Denmark and Canada were in talks over a region in the Lincoln Sea, between Ellesmere Island and Greenland, where the two countries collaborated on a research expedition in spring of 2009. Denmark, which plans to submit its proposal in 2014, has had close collaborations also with Norway and Russia throughout its investigation and is in talks with the United States for a joint expedition next year. In 2007, while charting the Swedish icebreaker the Oden, Denmark relied on the help of the Russian nuclear-powered icebreaker Yamal to clear a path in the heavy pack ice. Geophysicist Christian Marcussen, senior adviser and project manager for the Greenland part of the Continental Shelf Project of the Kingdom of Denmark, gives credit to Jakobsson for developing the pirouette method (image right) they now use to collect bathymetry data during heavy ice conditions.

"It was almost by coincidence," Jakobsson says. "We were mapping north of Greenland and looking for the foot of the slope, but the pack ice was everywhere. We could see the foot of the slope was over there, and so we turned the ship, and then turned the ship again and we saw it better and better. And then we got clear data. And we said ‘This is a good method!' But it wasn't like we sat down and calculated the radius." The sweep of the multi-beam during a spin in 4,000 metre depth for example, provides the crew on the Oden with a 10,000 metre radius view of the seafloor.

But the method isn't for everyone. "The Healy does not use the pirouette method because it is not as manoeuverable as the Oden," Mayer wrote in an e-mail. "We use something we call the ratchet method. When we are in very heavy ice, we ram the ice (no data) - we back down many boat lengths in the lead we just created (no data as there is much ice debris under the hull) - and then ram ahead again in relatively clear water till we hit the ice again. We get one or two pings during this second ram forward - we inch our way ahead this way, but can still collect useful data."

Jakobsson is in charge of compiling the bathymetry for the International Bathymetric Chart of the Arctic Ocean, which was last published online in 2008. Jakobsson promises a ‘a new grid' will be posted on the site by the end of this year. Besides data from the Oden and the Healy, Germany's Polarstern icebreaker is also equipped with multi-beam technology and contributes data to the map, but primarily operates in the southern Arctic regions or Antarctica. This season the Polarstern successfully launched an autonomous underwater vehicle under heavy pack ice at 79 degrees north near Spitsbergen. Canada, which tested the use of AUVs earlier in the spring, intends to utilise the new method for working under the ice again next year. But the AUVs still can't beat the icebreakers. By Jakobsson's standards, "The Arctic is not mapped. We have 6% of the Arctic mapped with multi-beam as of 2008." That is bits and pieces scrapped together. "In the central Arctic it is so difficult to work you always get just small bits and pieces. Those small fragments that we do get are extremely valuable," he says.

In July, the Russian news outlet RIA Novosti announced that the Akademik Fedorov icebreaker was also making its way to the central Arctic this summer, and equipped for the first time with a multi-beam echo sounder. That means the total number of icebreakers with multi-beam technology is now four. Russia was the first to submit its proposal in 2001, but the data collected at the time was not sufficient to support Russia's claim to either the Lomonosov Ridge, which cuts through the North Pole, or the Mendeleyev Ridge, which borders the Amerasia Basin. Russia is planning to resubmit its proposal again in 2013 and estimates the extended limit will provide an additional 1.2 million square kilometres to its sovereignty.

Expected to last 85 days, the Russian expedition this summer is tasked with defining the outer limits of the continental shelf of the Russian Federation. The Federov left Arkhangelsk on 28 July with a total of 67 Russian experts - including geologists from the exploration company Severneftegaz; hydrographers and oceanographers from the Institute of Oceanology of the Russian Academy of Sciences, the Arctic and Antarctic Research Institute, and the State Research Institute of Navigation and Hydrography, as well as government officials from the Ministry of Defence and the Ministry of Natural Resources. Hydrographer Andrey Zenkov will lead the expedition with Valery Viktorov at the helm. The Federov will travel through the White Sea to meet the Yamal nuclear icebreaker in the Barents Sea. At which point it is expected the two icebreakers will transit along the Northeast Passage to the Laptev Sea and begin exploring the connection between the foot of the slope of Russia's continental shelf and the Lomonosov Ridge. The team also has plans to identify a location for a new drifting Arctic station: North Pole-38, read a press release from the Arkhangelsk regional administration. According to the press release, Russia's President Dmitry Medvedev supported the decision to organise such a station.

Though the Russian expedition as well as the Canadian and American expeditions might both tackle part of the Mendeleyev Ridge this summer, they will not be overlapping. The western states will stay "on the Canadian side of the Alpha-Mendeleyev Ridge," says Verhoef. "We are not going that far offshore, we are not going to go into any area which was part of the Russian submission in 2001."