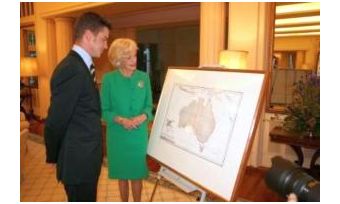 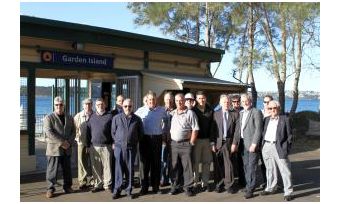 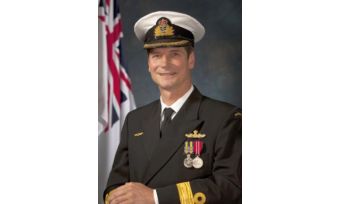 Sydney turned on its best winter weather and the harbour provided a delightful backdrop to the event.

West Australia Region
The AHS (WAR) is hosting the HYDRO11 Conference. This international hydrographic conference is to be held from 7 - 11 November 2011 at the Esplanade Hotel, Fremantle. The first call for papers has been made and further information can be found on the AHS website (www.ahs.asn.au).

Australia on the Map Division

This year marks the 200th anniversary of the publication, in Paris, of what is known as the Freycinet Map, the first map of Australia to be published showing the full outline of Australia. Consequently, the Australia on the Map Division of the Australasian Hydrographic Society has been actively promoting commemorations of this historic event across Australia.

One of the recent highlights was the presentation, on 16 June, by Henry de Freycinet of a signed copy of the Freycinet Map to the Governor-General of Australia, Her Excellency Ms Quentin Bryce. Henry de Freycinet is the last male descendant of the de Freycinets and was brought out from France to participate in the ceremony, as well as speak at a special commemorative symposium. The Governor-General and His Excellency Mr Michael Bryce received the official party for over an hour. Apart from Henry de Freycinet, others in attendance were Vice Admiral Chris Ritchie, Patron of the Australasian Hydrographic Society, the French Ambassador M. Michel Filhol, the director-general of the National Library of Australia, Ms Anne Marie Schwirtlich, Rupert Gerritsen, chair of the Australia on the Map Division, and Peter Reynders, secretary of the Australia on the Map Division.

A special commemorative symposium was also held in Canberra, on 19 June, timed to mark World Hydrography Day. This symposium, 'The Freycinet Map of 1811 - 200th Anniversary of the Publication of the First Map of Australia,' was conducted in collaboration with the National Library of Australia and the French Embassy. It not only featured Henry de Freycinet, who detailed the history of this famous French family but other eminent speakers, including Emeritus Professor Margaret Sankey and Professor Jean Fornasiero. Peter Reynders and Rupert Gerritsen also announced the recent discovery of the first world map showing a full outline of Australia. The symposium was a great success and received some national media coverage.