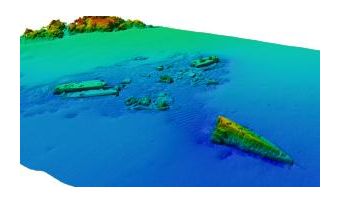 East Australia Region News
The meeting of 7 February opened with the chairman recording thanks to Sydney Ports Corporation (Gary Batman) for providing the venue. The main topic for the meeting was the proposed postgraduate course in Hydrography at the Australian Maritime College (AMC) in Launceston, Tasmania.

The main item for discussion at the EAR meeting was the proposed hydrographic course at the AMC and EAR members had been sent the AMC brochure prior to the meeting. Detailed responses were received, notably from George Goldsteen and Ron Whitmore. Both are founder members of the Australian Hydrographic Society. George Goldsteen set up the original AMC course in the 1980s. Ron Whitmore was a course examiner during that period.

George Goldsteen was unable to be present for the February meeting and tendered his apologies. Speakers at the February meeting included Ron Whitmore, the Hydrographer of Australia Commodore Rod Nairn, RAN, AO, Scott Preskett, Daniel Fitzhenry, with others making valuable contributions. Scott Preskett was charged with preparing a summary of the views of the meeting representing what was considered an industry wide (commercial, governmental and naval) and therefore unbiased view that the course should be structured to allow students to become qualified within the internationally recognised levels of competence. This summary was subsequently received from Scott Preskett and then forwarded to the president of AHS, Alec Millet, for consolidation with other material on the same subject, for submission to the AMC.

AHS Awards
The AHS has an Awards scheme to recognise the professionalism and service to our industry as well as to promote education in hydrography and related fields. The 2011/12 AHS awards are now open and the timetable is as follows:

Details about the awards as well as nomination forms are available from the AHS website www.ahs.asn.au/awards.html

Shallow Survey 2012 Conference
More than 200 hydrographers, marine charting experts and scientists met between 20 and 24 February 2012 in Wellington, for the 6th International Shallow Survey Conference. The conference was hosted by Land Information New Zealand (LINZ), the National Institute of Water and Atmospheric Research (NIWA) and GNS Science.

The Common Dataset, the centre piece of the conference, was the focus of the first conference session, with speakers commenting on the performance of the systems used to collect data in and around Wellington Harbour. The image shows the wreck of the HMNZS Wellington and was part of the common dataset.

“The conference was a great success for New Zealand and international speakers, delegates and trade show exhibitors. The breadth and depth of cutting edge science imparted over the week was impressive. LINZ, NIWA and GNS Science are proud to have hosted this event here” says Adam Greenland, New Zealand’s National Hydrographer.

The 7th International Shallow Survey Conference will be held in the UK in 2015. The location is yet to be determined.