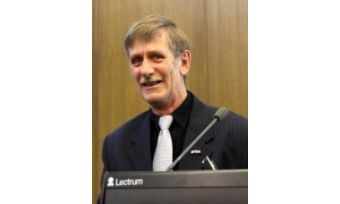 Rupert Gerritsen passed away in Canberra on 3 November 2013. He was chair of ‘Australia on the Map’ (AOTM), the ­Heritage and History ­Division of the Australasian ­Hydrographic Society (AHS).
He wrote a number of books, many scientific papers and reports and played an influential part in re-charting ­Australia’s maritime contact history prior to British settlement. With his friendly, encouraging nature and his considerable skills as a networker, he will be sorely missed by a nationwide network of friends and acquaintances.
A driving force behind the ­success of national commemorations in 2006 of 400 years of European contact, Rupert was a founding member of ’AOTM 1606-2006’, the organisation set up to promote and coordinate the commemorations.

Rupert Gerritsen was decor­ated in 2007 as a Knight in the Order of Orange-Nassau and was a Petherick Reader of the National Library of Australia.
The Patron, Vice Admiral Chris Ritchie AO RANR, AHS Council, Regional Committees and Membership extends its sympathies to Rupert’s friends and family.