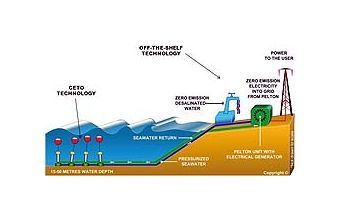 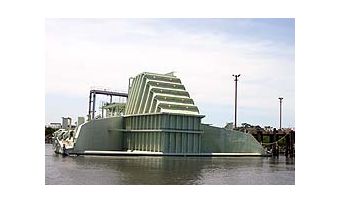 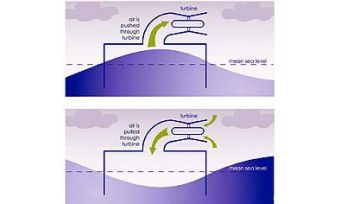 Australia has a strong track record for innovation and creativity in the development of clean energy technologies. Innovative marine energy sources, including wave and tidal energy, are locally gaining momentum to take advantage of the vast Australian coastline. Unfortunately, commercialisation of these technologies in Australia is restricted by the immature policy environment. Historically, poor policy support has led to many innovative Australian technologies being relocated to countries with more favourable policies.<P>


Marine Innovations
The Australian marine renewables industry has seen the emergence of a number of local innovations where companies have developed proprietary technologies that extract energy from the ocean (see Figure 1). Examples include CETO wave energy by Carnegie Corporation (Figure 2 and website 1) and the Oceanlinx wave energy system (Figure 3 and website 2). It is through these types of innovations that Australia has the potential to develop significant competitive advantage if the policy environment provided adequate support. However, the current situation may lead to many of the benefits of these types of innovations being enjoyed overseas. Two policies being implemented in Australia to combat climate change are the Carbon Pollution Reduction Scheme (CPRS) and the expanded Renewable Energy Target (RET). These policies should provide a significant boost to renewable energy in Australia; however, there is concern that they may not be sufficient to drive the required commercial investment.


Carbon
Putting a price on carbon is an important step towards making renewable energy prices competitive with fossil fuels. It may be some time before the CPRS will have a significant impact on this, however. The proposed CPRS is not due to start until mid-2011 and will be capped at AUD10 per tonne of CO2for the first year. Therefore, even if the legislation is passed now, the market would only start to determine the carbon price after mid-2012. The market price will only provide sufficient incentive for developing renewable energy if Australia sets strong emission reduction targets.


Energy Target
The 20% expanded RET (passed into legislation 20 August 2009) builds on the existing small MRET, which was successful in encouraging a local wind industry. This is the most significant policy to help increase overall renewable energy generation. However, less mature technologies such as wave and tidal will have to compete with well-established renewable technologies. The inclusion of domestic solar hot water in the scheme also adds to uncertainty, as this is expected to make up a significant percentage of the target. Wind energy (the most well-established renewable) is likely to dominate the RET, and is of course an extremely important renewable source that needs to be expanded and developed. However, it is also important to provide incentives for the commercialisation of less mature innovative technologies, where Australia may have a competitive advantage.

Solutions
Incentive to commercialise emerging technologies could be provided in a number of different ways. One option is to implement a banded renewable energy target that sets different targets for individual renewable industries. Another mechanism that has been extremely successful in Europe, when designed well, is gross feed-in tariffs. Feed-in tariffs provide a guaranteed rate for electricity generation for specific technologies, and hence greater income certainty for investors. Tariffs can be set to support commercialisation of particular technologies and then reduced once the technologies become established. Feed-in tariffs have been demonstrated to be a successful policy measure in Germany, generating investment into technologies such as wind, solar PV and biomass.

Targeted Policies
Emissions trading and an expanded RET are important policies to combat climate change and support renewable energy growth. However, more targeted policies are required to provide incentive for local commercialisation of innovative new technologies, such as the developments present in the marine energy industry.Without this policy support, Australia will continue to see many of the benefits of these types of innovations move offshore.

Stewart-Rattray, R., 2009: Encouraging renewable energy in Australia in the electricity sector: A purely market based approach or a mix of policy measures? Institute of Environmental Studies, University of New South Wales, Sydney.