A New Way to Monitor Your Data 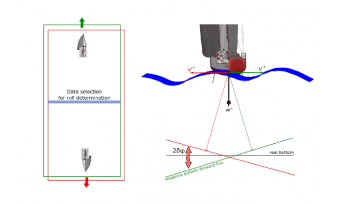 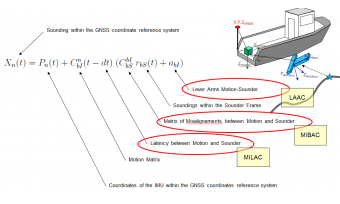 Currently, calibration of multibeam echosounders (MBES) for hydrographic surveys is based on the traditional ‘patch test’ method. This subjective method, although rigorous, has major drawbacks, such as being time-consuming (both data acquisition and processing) and supposing that potential angle misalignments can be considered as uncoupled. A new algorithmic solution, providing an objective and repeatable first step to the automation of the calibration process, is offered through the MSPAC solution.

Hydrography is essential in many marine activities:

Multibeam echosounder technology has evolved rapidly in recent years (multi-frequency, multi-swath, real time compensation, etc.), which has led to major improvements in spatial resolution and bottom coverage. To maximize benefits from these improvements, a careful calibration of the survey system has to be undertaken, but after the work carried out in the 1980s and 1990s that lead to the well-known patch test method, the subject has received limited attention. It is therefore time to move forward.

The patch test decouples the three boresight angles by surveying characteristic areas following a specific pattern. For the roll angle, a flat bottom is surveyed in opposite directions. For the pitch angle, a slope or a particular seabed feature is surveyed in opposite directions. The effect of yaw is classically determined by identifying a target over a flat bottom, and surveying it from two parallel and overlapping survey tracks heading in the same direction. As an example, Figure 1 sketches the configuration needed to determine the roll boresight angles.

While this method is particularly efficient, it has a series of drawbacks such as:

The results of these algorithms are presented in detail in articles [2] and [3]. An example of the data selection made by MIBAC is shown in Figure 3. In this figure, the seabed is modelled as a grid of surface elements. For each element, a sensitivity criterion is calculated to indicate areas where boresight angles cause the most distortion of the seabed.

Figure 4 shows the results of the comparison between a traditional patch test and MIBAC. These results have been freely distributed, so that everyone can experiment with and test these algorithms. The study reports (under ‘licence ouverte’/, a French open license) and the source codes (under CeCILL license, GPL compatible license) can be found at gitlab.com/GitShom/mspac/shom-mibac. The Shom disclaims any responsibility for the operational transfer as well as the maintenance of this software. Stakeholders are of course invited to use, improve and industrialize these source codes.

The software is being continuously improved by the open source community to allow customizations of various aspects such as:

This will allow, for example, the incorporation of different methods for identifying planar surface elements such as [4]. Several internal parameters are currently inaccessible to the user, such as:

As with all open source endeavours, the code can be parameterized to suit customer-specific needs either by CIDCO or third-party developers.

The current state of MSPAC is only available from a command line interface and a graphical user interface would greatly improve the user experience. We welcome this initiative to publish MSPAC codes under open source licenses and we look forward to working with stakeholders and members of the open source community on further developments of the MSPAC calibration suite.

The automation of the calibration workflow is an essential step in the droning of acquisitions at sea. Even if the results seem very interesting, it is also necessary to have a good quality positioning source (RTK or PPP) and a bottom morphology corresponding to a gentle slope to obtain the best results. In addition, the proposed solution makes it possible to provide a statistical uncertainty on the measurement as well as an objectivity that is difficult to achieve with the classical patch test. It also makes the automation of calibration procedures possible, especially for drones. The contact person for the MSPAC solution industrialization is jordan.mcmanus@cidco.ca.

This solution was developed through a NOCALIT/CALIB-1 research project between ENSTA Bretagne and Shom with funding from DGA (French Ministry of Defence). Thanks to DGA for supporting this project and for making it possible to disseminate these results.