A GEBCO meeting in Copenhagen twelve years ago began the push to develop an autonomous drifting echo sounding buoy (SSPARR or Seafloor Sounding in Polar and Remote Regions). It coincided, not incidentally, with Clinton’s removal of Selective Availability (SA) from GPS navigation, and the availability of worldwide Iridium satellite communications.

My doctoral studies were in the Arctic, making geophysical measurements from Fletcher’s Ice Island (T-3), a drifting ice station operated by the US Air Force and Navy from 1952 to 1984, and occupied for a record 7,240 days. Despite residing in the Mideast since 1970, my experience of ‘thinking outside the box’ has fueled my interest in mapping the ice-covered Arctic through development and deployment of the first buoys with echo sounders.

Past Insider’s View columns in May and December of 2008, and a cover article on low budget hydrography in June 2006 have discussed such buoys and construction of an Arctic research hovercraft (R/H Sabvabaa 1) which can easily deploy such buoys, including two systems which actually do seismic profiling. The initial SSPARR project by University of Hawaii, Lamont and UNH’s CCOM was funded by a highly-rated NSF grant totalling a half million dollars for non-recurring engineering, testing and a prototype. Failing to arrive at a working prototype, this effort was then transferred in 2008 to Christian Michelson Research AS in Bergen, Norway, developer of our existing autonomous seismic profiling buoys with sparker sound sources.

As field tests of the original proprietary sounder were very disappointing, we began to regard echo sounding average ocean depths as something akin to rocket science. I finally decided to go to experts with a successful long-term track record: Two EchoBox units were purchased from SyQwest Inc. in Warwick, RI, USA. Modified to work with their heavy TR109 3.5kHz transducers, two units were provided to engineers David Peddie at CMR and Dale Chayes at Lamont.

The CMR system was deployed repeatedly from the hovercraft over the Yermak Plateau north of Spitsbergen in 2010 and 2011. The thousands of soundings collected at latitudes to 82°N were used to improve the IBCAO grid. While still not incorporated into a buoy prototype, the system has shown that it produces soundings according to its rate of drift as shown by the GPS, that it can transmit the data back to Bergen using Iridium short burst data (SBD) services, and that the buoy can be remotely programmed via the bidirectional Iridium communication. This CMR-designed system will undergo further testing in 2012 in the eastern Arctic.

This spring the Lamont EchoBox will be integrated with Iridium communications and GPS from JHU/APL’s newly developed iBuoy and will be repeatedly deployed for brief ‘supervised’ periods (hours to a week) during the annual NSF-funded Freshwater Switchyard flights to water sampling sites between Alert on Ellesmere Island and the North Pole (website 2). Later the system will be further tested during the 2012 Healy ECS/UNCLOS cruise in the Western Arctic in late summer.

Depending upon the results of its upcoming tests, Lamont proposes construction of 10 units for Arctic deployment from 2013 Switchyard flights, the Sabvabaa hovercraft, and opportunistic icebreaker cruises. As SyQwest EchoBox electronics include CHIRP operation, a shallow subbottom profiling capability is possible at increased Iridium usage expense. Although the original projected cost per buoy was USD3-4,000, it’s likely the final cost will be five times greater. 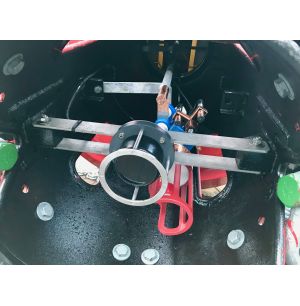