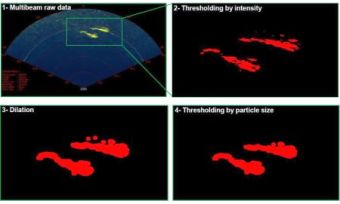 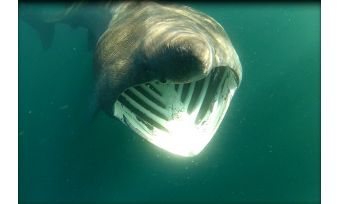 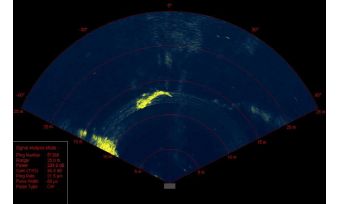 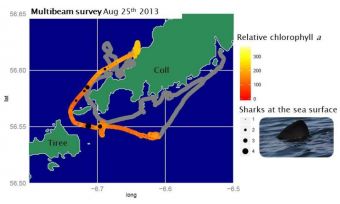 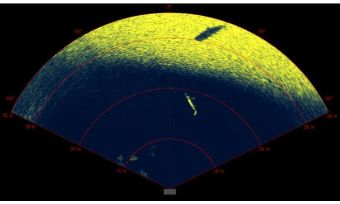 Recent hydrographic advances are revolutionising the way the marine environment can be accessed, scanned and quantified. With the emergence of sonar technology and, more recently, remotely or autonomous operating vehicles equipped with sonar, underwater cameras or photogrammetry, almost all aspects and species within our vast oceans can now be visualised. This is also becoming reality for even the most elusive marine animals. Here, we describe our quest to track basking sharks, Cetorhinus maximus, using multibeam sonar, thereby advancing the way we can observe and protect the UK’s largest shark.

The application of hydroacoustic methods to study fish and, more recently, marine mammals or diving seabirds, has provided three-dimensional data in time and space for a more detailed understanding of subsurface movements. Both, single/multi-frequency echo sounders and multibeam sonar systems have been used increasingly in behavioural studies of marine animals. Producing a multidimensional acoustic image, multibeam visualisations of marine life can extend the view from animal surface observations deep into the water column. Multibeam sonar has not been used to study sharks to date, but could provide a major advantage to make observations of an elusive species that does not require to surface to breathe and spends most of its time at depths of 100s to 1000s of metres.

Reaching over 12m in length, the filter-feeding basking shark is the world’s second largest fish just after the tropical whale shark. Every summer, basking sharks appear in their tens or even hundreds in UK coastal waters, showing persistent, seasonal aggregations. Little is known about their life history, and the only record of a birth was made by a Norwegian fisherman over 70 years ago: a captured female basking shark gave birth to five live young and one still-born. Until recently, basking sharks were fished for their liver oil, mainly around Norway, Scotland and Ireland and over 70,000 sharks were landed in a 40-year time period. The impacts of these fisheries remain uncertain, leading to their classification as ‘Endangered’ (IUCN Red List) in the Northeast Atlantic and inclusion on the MPA (Marine Protected Areas) search feature list for Scottish territorial waters.

In coastal waters, basking sharks often spend a considerable amount of time at the sea surface, and as their name suggests, early fisherman believed they were ‘basking’ in the sun. Feeding in these waters is now evident, but it has yet to be determined if basking sharks use these areas for socialising, breeding or mating – vital information for their conservation. Hence, there is an urgent need to find novel approaches to study basking shark subsurface movements. Despite the rapid expansion of marine renewable energy (MRE; offshore wind, tidal and wave energy) installations, there remains a high level of uncertainty surrounding potential environmental and ecological interactions with marine life. Detailed behavioural response studies investigating potential impacts in the field are currently limited, thereby posing a challenge to provide robust information for successful Marine Spatial Planning.

Quantifying interactions remains a major challenge due to the difficulty of observing diving animals in highly productive waters, where visibility is often poor. Therefore, the choice of observation platform for tracking multiple individuals needed thorough evaluation. While animal-borne instrumentation such as satellite or archival tags provides a vast amount of information on individual horizontal and vertical movements, it is impractical as a tool to quantify behavioural/social interactions. Remote sensing further relies on either frequent surfacing to obtain exact geolocations in near real-time, or subsequent tag recovery, which is not always possible when working with highly migratory animals. The use of underwater video can be advantageous in waters with excellent visibility, yet its uses are extremely limited in temperate, turbid waters. Only recent advances in the application of acoustic receiver-transmitter systems have improved the extent to which interactions of free-ranging sharks can be quantified, however it relies on prior tagging of all individuals within the group.

As no traditional methods seemed ideal for quantifying basking shark interactions, hydroacoustic approaches were considered as a potential way forward. A major criterion for selecting the type of hydroacoustic instrument was the ability to capture subsurface movement in real-time, at high resolution (sub-metre) and at long ranges (tens to a hundreds of metres). Therefore, we tested the efficacy of a high-resolution imaging multibeam sonar, the Teledyne RESON SeaBat 7128 (200/400kHz), to detect and track basking sharks in the shallow, temperate Sea of the Hebrides. It offers a wide horizontal beamwidth (128°) and a vertical received beamwidth of 28.5°, allowing visualisation of multiple sharks at a resolution that permits tracking of individual shark behaviour and interactions at ranges from 200-400m. The overall aims of this pilot-scale project were two-fold. Firstly, to explore the suitability of a state of the art hydroacoustic instrument for basking shark tracking that could be further developed for MRE monitoring. Secondly, to test the multibeam sonar and its efficacy in gathering more detailed natural behavioural data on basking shark aggregations. Fine-scale behavioural observations in combination with oceanographic data will ultimately enhance our understanding of the drivers of aggregations and habitat selection in times of large-scale marine habitat modification.

We chose a known aggregation site off the islands of Coll and Tiree (56.3°N, 6.3°W) on the West Coast of Scotland. Listed as an MPA search location, this site was also chosen due to its relevance for a planned offshore wind farm, the Argyll Array. A pilot study was conducted in August 2012. The multibeam was mounted on an aluminium ladder and submerged 0.5m onboard an 11.9m motorised vessel, the FV Tarka. The sonar head was directed perpendicular to the vessel on its port side. The angle of the sonar head was fixed to limit the survey area to the upper water column, where most sharks where expected. The dry end, displaying real-time recordings on a 19" LCD monitor was kept inside the vessel cabin. As basking sharks could be identified with confidence, a follow-up study was conducted in August 2013. The set-up was similar, however during this deployment, a flexible pan and tilt mechanism was applied allowing quantification of both surface as well as mid-water sharks, inaccessible to conventional echo sounders. Survey design consisted of either transects across visible thermal fronts (slicks at the surface) or active basking shark tracking of up to 20min at a time (Figure 3).

To supplement subsurface observations, subsurface chlorophyll a (chl a), as an indicator for prey availability, was measured with an in-situ fluorometer (Minitracka II, Chelsea Technologies Group) at 5m depth via a towed line that also included Star-Oddi mini-loggers that continuously measured temperature and salinity. Additionally, daily satellite data of sea surface temperature, temperature fronts and chl a were obtained from the Plymouth Marine Laboratory (The Natural Environment Research Council Earth Observation Data Acquisition and Analysis Service).

Post-processing of at-sea bio-physical measurements will include comparison with satellite-derived data to allow quantifications of the oceanographic conditions during shark encounters. Subsequent target tracking uses shark position registered using the boat’s GPS, compass heading and multibeam tilt angle, coupled with parameterisation of key target features. More specifically, we will use image processing algorithms for shark detection and tracking from multibeam sonar images which are being written in National Instruments software LabVIEW. Initial detection relies on thresholding by intensity, dilation and then thresholding by particle size and ellipse ratio (Figure 4). Most observations were made from a relatively constant distance of 20-30m and included synchronised swimming, nose-to-tail following and zig-zag feeding, both at the surface and when submerged. Occasionally sharks also swam towards the boat. When fully submerged, basking sharks often left a distinct wake behind or created a shadow on the seabed (Figure 5).

This successful application of a high-resolution multibeam sonar to detect and track basking sharks has proven a useful tool to visualise their movements and behaviour, which is currently being analysed. A vessel-mounted multibeam sonar can be used either statically, i.e. for monitoring a specific site, in transect surveys or active tracking. The addition of a flexible pan and tilt mechanism has allowed for observations at the surface and mid-water tracking. This set-up allows for acoustic detection from a distance consistent with minimising disturbance. In order to explore the key processes causing variability in basking shark behaviour, we recommend integrating a synchronised multi-frequency echo sounder to allow additional prey quantification (such as zooplankton) to test a range of hypotheses addressing predator-prey interactions and courtship/mating activity. Information derived from combined oceanographic and behavioural datasets will underpin model predictions of how changing oceanographic conditions attributable to offshore installations may impact vital basking shark habitat.