Performance and Challenges in Shallow Water 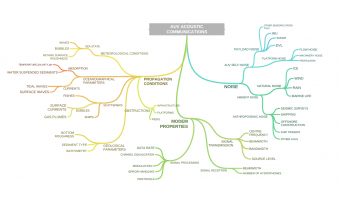 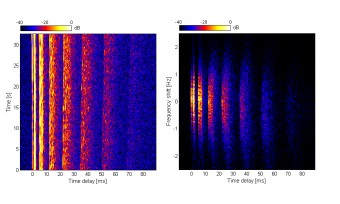 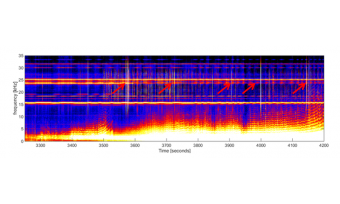 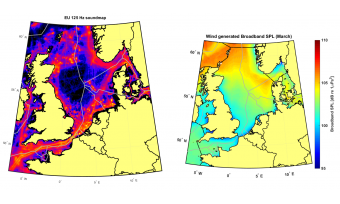 The prospects for an increased future use of autonomous underwater vehicles (AUVs) in the Maritime & Offshore sector are high, mainly due to the search for cost effectiveness. AUVs reduce the need for large crews, divers and vessels in the operational area. AUVs are already operational for bathymetric and environmental mapping, pipeline tracking and mine hunting, and there is a trend towards their use for inspection and environmental monitoring.

The Performance of Underwater Acoustic Communications

Underwater acoustic communication using acoustic modems consists of transforming a digital message into sound that can be transmitted in water, and vice versa.

Based on our experience, we can group the factors influencing the success of communications into three categories: sound propagation conditions, specific modem properties and background noise in the communication band (Figure 1).

The following physical mechanisms can deform the signal and challenge the reception and interpretation of the contained message:

An underwater modem translates digital messages into waveforms that can be transmitted acoustically. Digital modulation is the technique that allows a digital signal to be transferred over an analog channel and consists of mapping the information bits into analog waveforms that represent the data that we want to transmit. After propagation through the medium, received analog signals are sampled and demodulated to recover the original digital message.

The main characteristics of an underwater modem are its communication bandwidth, its carrier frequency and the employed modulation method. The useful bandwidth is strongly dependent on the environment and the communication range. Often, for a modem designer, the goal is to optimise effective data rates while simultaneously focusing on robustness. To reach both these goals, the modulation must be spectrally efficient, and be able to cope with the time-varying underwater conditions. Within their designated bands, most underwater modems are not limited by ambient noise, but by delay and Doppler spreading, i.e. the signal can be heard but not be understood due to its distortion by the channel. At present, most commercial modems use non-phase-coherent modulation. Improvement can be attained by using phase-coherent modulation schemes, which require estimation and tracking of the phase of the transmitter. An overview of common underwater modulation methods tested in shallow waters is given in Table 1. The main ones are based on Frequency Shift Keying (M-FSK), Phase Shift Keying (M-PSK) or Quadrature Amplitude Modulation (QAM).

Noise in the Communication Band

Noise from an AUV can interfere with the onboard modem and with the reception of acoustic messages from a receiving hydrophone. Noise sources at the AUV include hull vibrations and mechanical noise, propeller noise, electronic noise, flow-induced noise and payload cross talk. We measured the net radiated noise by an AUV during a sea trial in the EDA-NECSAVE project. Figure 3 shows the uncalibrated sound pressure spectral density level (0 - 35kHz) measured by a receiving hydrophone while the AUV was approaching at a speed of 2m/s from a distance of 500 to 50m. Acoustic messages are transmitted and received in the 18-34kHz band (Figure 3: the sharp vertical lines are acoustic messages between the AUV and the control station). The AUV noise contributes mostly to the lower part of the frequency spectrum (<15kHz) at these distances but on approach the high frequency contribution increases, because of the diminished attenuation. At close distance AUV self-noise can therefore be a significant source of disturbance for communications. It is easy to understand how this could be even more important for an onboard acoustic sensor.

Ambient noise is most prevalent in the low frequency band. However, anthropogenic noise originating from nearby sources can have a disruptive effect for communications, as can be seen in the recording shown in Figure 5 where a ship is passing nearby an AUV communicating to a control station. At time 15:00, the ship is at its closest point of approach and the noise covers the whole communication band causing potential drop-out of messages. Although this effect is only significant for close passages, the intensity of shipping in the North Sea makes it an important effect to be taken into account when performing operations. As an example, a sound map due to shipping in the North Sea is shown in Figure 5 (left).

Models such as the Wentz curve do not capture the strong variability in space and time and of the noise sources. Figure 5 (right) shows a sound map for wind in the North Sea in March that has strong location and season dependence due to the variability of oceanographic parameters.

Many factors can affect underwater communication to and from AUVs. By having good knowledge of these factors in situ, it is possible to plan AUV operations more efficiently by adapting the bandwidth, communication protocol, network topology, and level of autonomy of the vehicle used. In particular, future networked operations in the North Sea should be complemented by planning tools that take all the parameters presented in Table 1 into account to realistically predict and improve the performance of AUV communications (giving an ‘underwater communication range of the day’).