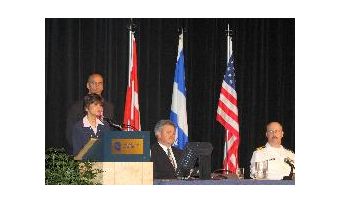 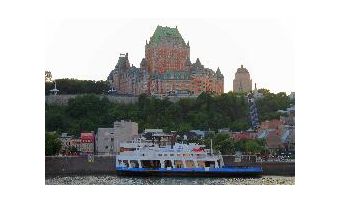 The Canadian Hydrographic Conference was held in Quebec City from 21 - 23 June. These North American conferences are biennial events that take place alternately in Canada and the USA. The venue for this year’s event was the historic and beautiful city of Quebec overlooking the St. Lawrence River.

There were 48 exhibitors and about 400 people attended from 15 countries. Several hydrographic vessels were moored in the port and open for visits and demonstrations. A unique exhibit in the conference building itself was the Surveyor, a replica of the survey launch used by the British Admiralty for surveys around 1792. The conference was managed by an enthusiastic team from the Quebec Region of the Canadian Hydrographic Service in a most efficient way and everything ran smoothly.

Quebec plays a most important part in the maritime history of Canada, with the landings of Jacques Cartier and Samuel Champlain being a very significant part of its history. Later came the very important surveys by James Cook that were in part responsible for the successful campaign of the British against the French in the eighteenth century. A matter that was interestingly related by the opening paper by Don Olson, who discussed the great importance that tidal current studies had on the event. During the conference several papers related to work in Arctic waters, which are becoming increasingly important as the effect of global warning is reducing the ice cover. The Arctic has both an historic dimension in the discoveries of the French Canadian, Captain Bernier and a very modern dimension in the multi-beam echo sounding surveys aboard modern powerful icebreakers, discussed by John Hughes-Clark.

These North American conferences, arranged administratively by the Canadian Hydrographic Association and The Hydrographic Society of America are dominated by technical papers discussing the ongoing work at the centres of hydrographic excellence of the University of New Brunswick and the University of New Hampshire, other academic organisations, including the host city's Laval University and the Canadian Hydrographic Service and the US NOAA's National Coast Survey. A very demanding schedule of technical presentations and an almost equal number of poster sessions were included. In addition, a series of workshops preceded and ran in parallel with the conference. Running in parallel with these were the ship visits, often making it hard for the attendees to choose. Amongst the subjects discussed were: Delimitation of Maritime Boundaries; Business, careers and training; Ecosystem Hydrography; Data Acquisition, Dissemination, Processing and Production; Horizontal and Vertical Datums and Modern Navigation. Navigation addressed a wide range of what we now term e-navigation and was attended by both actual practitioners and researchers. Overshadowing the formal discussions were a number of references on how hydrographic technology was being put to very practical use in the present oil spill disaster in the Gulf of Mexico. Important future policy decisions will no doubt be made once this current disaster is resolved and in the Arctic, where much of the current hydrography is supported on the premise of future hydrocarbon discoveries, the question will be whether there should be a total moratorium of exploration or whether even more detailed environmental knowledge is needed.

While the technical programme was stimulating, no hydrographic conference could be effective without the social events that provide the opportunity for ‘corridor talk' and simply a chance to get to know each other better! The social events, particularly an evening dinner cruise on the river, were arranged with great flare. Altogether this was a memorable, well-attended and useful conference. We can now look forward to the next event which will be the US Hydro Conference that is to be held at Tampa, Florida 25-28 April 2011 and looking even further head to the next Canadian event at Niagara Falls, 12-14 May 2012.