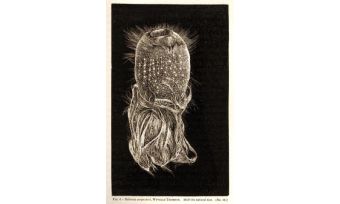 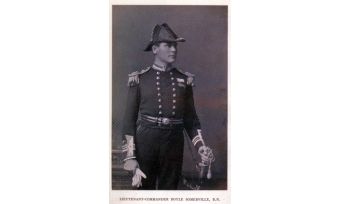 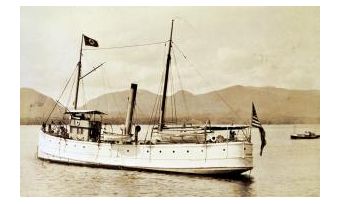 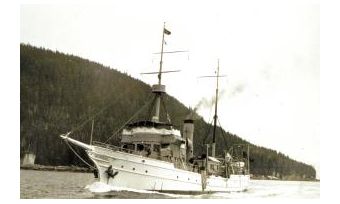 In times past, it was often the lot of the hydrographer and ocean scientist to have hand-me-down ships and vessels from the naval service or revenue service of various nations. Or, if they did have ships designed for hydrographic service, they were kept in service so long as to become both inefficient and dangerous to the crew and officers. However, through the perseverance and skill of the men operating these vessels, oftentimes these same ships made great contributions, both to the surveying of the coasts of the world and to the ocean science of the time.

In the mid-Nineteenth century there was a theory that life ceased to exist below 300 fathoms throughout the world’s oceans. This concept had been put forth by the great naturalist Edward Forbes in 1843 and was based on results of his early scientific dredging cruises in the Aegean Sea. This belief inspired a generation of the embryonic ocean science community to either prove or disprove Forbes’ theory. Wyville Thomson was one of those inspired to seek life below the 300-fathom azoic zone and was given the use of a small side-wheel steamer for use in dredging operations off the British Isles in 1868. He describes the ship in The Depths of the Sea, published a few years later:

“The surveying ship Lightning was assigned for the service – a cranky little vessel enough, one which had the somewhat doubtful title to respect of being the very oldest paddle-steamer in her Majesty’s navy. We had not good times in the Lightning. She kept out the water imperfectly, and as we had deplorable weather during nearly the whole of the six weeks we were afloat, we were in considerable discomfort. The vessel, in fact, was scarcely seaworthy, the iron hook and screw-jack fastenings of the rigging were worn with age, and many of them were carried away, and on two occasions the ship ran some risk. Still the voyage was on the whole almost pleasant.“

Although the Lightning, built in 1823, was not the ideal vessel, Thomson and his colleagues pushed back the limits of known life to over 500 fathoms during this cruise. The following year they were given use of H.M.S. Porcupine and successfully dredged in over 2400 fathoms and found a variety of deep sea life forms forever exploding the 300-fathom theory. The success of these cruises led directly to the Challenger Expedition with Wyville Thomson as chief scientist.

Vice Admiral Henry Boyle Somerville of the Royal Navy was serving on H.M.S. Penguin on 31 December 1895, when that small vessel made the deepest authenticated sounding made up to that time. He described H.M.S. Penguin in these terms in a 1927 article in Blackwood’s Magazine: “The Naval Surveying Service has ever had foisted upon it for its work any old castaway ship that has become useless for other branches of the Navy. No one knows except those who have suffered from them how much more difficult that work – and nor more essential work for the safety of the Navy can be conceived – is made for us by the aged hoodleums that are handed out for our use. But of all the old clumbungies with which the Surveying Service has been saddled, the Penguin would be hard to beat for clumbunginess. She was everything she should not have been for her special work, and the sole respect in which she was at all suitable as a surveying vessel was that her hull was of wood sheathed in copper, so that if, as must inevitably happen in an exploring vessel, she should touch on the rock for which she was searching, or come upon it unexpectedly, less damage would be done than if she had only a thin steel plate between her and the chance of sinking.”

In spite of its clumbunginess, and perhaps more to the perseverance of its captain, Andrew Balfour, the Penguin sounded in 5155 fathoms in the Tonga-Kermadec Trench on that day, the first ship to ever acquire a verifiable sounding greater than 5000 fathoms. Of this sounding and the bottom sample that proved it had been made, Somerville wrote: “… we realised that we saw before us that of which the very foundations of the earth are made, and also that we were the first to see land that came from a depth below sea level which was just a little more than the height of snow-topped Everest is above it. “

A US ship that was described as a ’lemon’ by Rear Admiral Harley Nygren, NOAA Corps (ret.),was the Coast Survey steamer Jefferson. The Jefferson was built to be a revenue cutter in 1845 and originally equipped with a screw propeller. However, following initial sea trials, this ship was never put into service as a revenue cutter for unknown reasons. It was converted to a side-wheel steamer and transferred to the Coast Survey in 1849. US Navy Lieutenant Thornton Jenkins was appointed its first Coast Survey commanding officer and given the task of outfitting the ship for surveying service. On 26 July he wrote to the superintendent of the Coast Survey: “It would be vain for me to attempt to express to you how greatly I have been annoyed at finding so much to be done on board of this vessel to put her in a safe and fit state for sea.” In Nygren’s words, the vessel “….was lacking ’hammock cloths, hatch tarpaulins, wind sails, boat sails, ladders, iron work, awning stanchions, hatchway ladders, boat davits, lockers for chain cables, chain pipes, clothes lockers, hatch bars, spirit room bulkhead, galley funnel and a properly located steering wheel’.” Also, engine order bell and navigation lights were gone and “it was found that the shackles in the chain cable were made of wood!”

Jenkins did his best to ready the ship for sea and actually ran 850 miles of sounding lines on the east coast of the United States with the Jefferson but experienced numerous mechanical failures as well as having a rotten bowsprit break off with a small head sea. The ship was laid up in late 1849 as additional repairs were considered to be too expensive at the time. In 1851, this ship was made ready for sea again under Lieutenant Francis K. Murray and assigned to duty on the West Coast of the United States. On 3 June, Murray wrote Bache from Port Desire, Patagonia, “It becomes my unpleasant duty to inform you of the disasters which have befallen the Jefferson since leaving Montevideo, and driven us into this port, a complete wreck.” The ship had encountered a great storm off Patagonia and narrowly escaped sinking but sustained great damage including loss of masts and “staving in the bulkheads of the engine-room, wheel-houses, etc., and carrying the steering-wheel overboard ...” by a great sea. The vessel had also “… begun to leak badly; the bilge-pumps, choked by the coal, would not work, (no uncommon occurrence with them;) and the frames of the engines had started from the hull….”

The Jefferson was sailed to Port Desire as it was the closest safe haven. Murray observed, “The vessel is evidently shattered fore and aft, and continues to leak badly at her anchors, droops forward and aft, and presents every appearance of having broken amidships….” The decision was made to drive the ship aground and abandon it. As opposed to the Lightning and Penguin, this ship did nothing to advance science or the survey of the coast and ended its days rusting away on a distant coast. It was a lemon from its initial launch until its ignominious end on the coast of Patagonia.

As with H.M.S. Lightning, there have been a number of United States Coast and Geodetic Survey (USC&GS) vessels that have been operated after exceeding their useful life. In 1915, John J. McGrath, the west coast inspector for the C&GS, reported that of the major survey ships operating in the Pacific, their ages were 39, 40, 33, and 11 years old respectively. Of the 39-year-old vessel, the McArthur, McGrath wrote,“ The superstructure of this vessel is weak, not well proportioned for strength, accommodations and stiffness and will continue to be a source of repair expense each year unless entirely rebuilt from the waterline up. The boiler (Scotch Marine with two furnaces) has become seriously defective and will require from USD200 to USD500 per annum to keep it in workable condition, but at the same time carrying lower and lower steam pressure from year to year; the steam pressure allowed at present is too low for reasonable efficiency.” The second ship, the 40-year-old Gedney, suffered from similar problems but also had its steam launch described in the following terms: “The present Herreshoff steam launch attached to this vessel is absolutely rotten both fore and aft. Last borings showed that there was not a particle of sound wood in stem and stern post, nor in the deadwood and apron. Further use of this launch is simply courting disaster.” Concerning the 33-year old Patterson, “… out of a spirit of radical economy… this vessel was not kept up as it should have been, from which she is now suffering, although the present commanding officer is making heroic efforts to abort the consequences, which will ultimately cost the full price that it originally should, with interest compounded for the rest of her existence added thereto.” The Explorer, the 11-year old vessel, was already obsolete and falling apart as it had been originally designed to be a larger ship but economies associated with down-sizing made it overcrowded and difficult to maintain. From the standpoint of survey use, it had neither watertight bulkheads nor a collision bulkhead making it extremely unsafe to operate in uncharted waters.

Perhaps old and unsafe ships, some of which were never designed to be surveying vessels, are a thing of the past. Have any of our readers ever worked off a clumbungie, lemon, or just plain worn-out old vessel that had seen its best years many years before? It would be surprising if many of you answered ‘No.’