The Loss of the Coast Survey Steamer Robert J. Walker 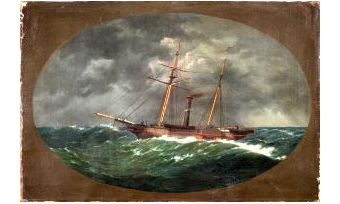 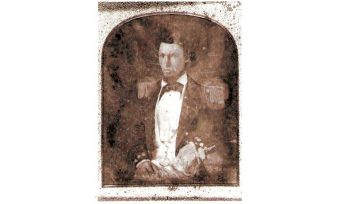 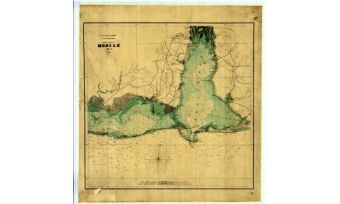 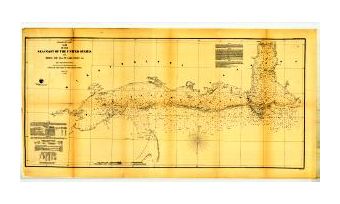 On 20 June 1860, the iron-hulled United States Coast Survey Steamer Robert J. Walker was proceeding to New York City, its home port. The ship, under the command of Navy Lieutenant John Julius Guthrie, was returning from a successful season surveying in the Gulf of Mexico where it had been working since January. The crew would have been in high spirits anticipating seeing wives and families, sweethearts and friends the following day when the ship was scheduled to arrive at the Brooklyn Navy Yard. At 2:20 in the morning of 21 June, disaster in the form of a collision with a fully-laden coal schooner struck. The Walker sank following the collision and the ship was not found until over a century later. What follows is the story of the Walker, perhaps the oldest hydrographic vessel ever discovered and certainly the oldest iron-hulled US Government steam vessel ever found.

The Walker was one of eight steamships built for the Revenue Cutter Service (forerunner of today’s United States Coast Guard) as experimental vessels in the 1840s. Considered too slow for the revenue service, most of these vessels were transferred to other services without ever serving a day as revenue cutters. Four of these vessels, including the Walker, were transferred to the United States Coast Survey in the late 1840s. Transfer of the Walker in 1848 occurred at Mobile, Alabama, on the Gulf Coast where it would conduct much of its work. Its first Coast Survey commanding officer was Navy officer Carlile P. Patterson, destined to become the fourth superintendent of the Coast Survey. Under Patterson, officers and crew of the Walker completed surveying the approaches to Mobile Bay and also compiled information on the tides, currents and winds affecting the northern Gulf Coast. Sounding boats worked inshore while the Walker, with its 10-foot draft, worked in the deeper offshore waters and channels. Prior to assuming command of the Walker, Patterson commanded the schooner Forward for survey work in the vicinity of Mobile Bay entrance. This afforded the basis for a direct comparison of the cost of sail versus steam for surveying purposes. Patterson reported that for a given unit of hydrographic surveying production in offshore waters where the steamship was the primary surveying platform, it was 40% less costly to operate than a sailing vessel. This report helped assure the growth of the steam fleet in the Coast Survey.

For the next twelve years the Walker worked in the area from Alabama to the northern Texas coast. Its usual working season was from January till late June as summer was the time of ‘fever’ on the swampy Gulf Coast. Despite this, crew members would occasionally be stricken by yellow fever and other maladies. It would spend the next five months refitting for another season of surveying. Sometimes it would stay at the Pensacola navy yard, other years it would head north to either Philadelphia or New York. Most of its commanding officers during this period went on to illustrious naval or civil careers following their tour on the Walker. As noted earlier, Patterson went on to head the Coast Survey; James Alden had major Union commands during the Civil War; Samuel P. Lee, a cousin of Confederate General Robert E. Lee, commanded both the Union North Atlantic and Mississippi Squadrons during the Civil War; and Benjamin F. Sands commanded Union vessels and went on to head the Naval Observatory following the Civil War. Two of its commanding officers joined the Confederacy. Thomas B. Huger was killed while in command of an iron-clad at the Battle of New Orleans, and its final commanding officer, John Guthrie, commanded a number of Confederate vessels although he remained ill-fated. Under their collective commands, the Walker surveyed Mobile Bay, Mississippi Sound and its ports, the Chandeleur Islands, the Mississippi passes and the coast westward to the north coast of Texas. Over 900,000 hand-cast lead-line soundings were obtained in the thirteen seasons from 1848 through 1860. In addition to its normal hydrographic survey duties, the vessel also conducted pioneering deep-sea soundings in the Gulf of Mexico, observed inshore tides and currents, and made the first observation of the ‘Loop Current’, having tossed a current bottle overboard south of Mobile that was discovered on Florida’s east coast two months later. Of all the commanders, Sands served the longest between 1851 and 1858.

Up until the morning of 21 June 1861, the career of the Walker had been unremarkable, marked only by competency and efficiency. But in a few short minutes, that all changed. At 2:20 am, the fully loaded schooner Fanny struck the Walker on its port side, carrying the port boats away and knocking a large hole just abaft the bow. According to executive officer Joseph Seawell who was on watch at the time of the accident, the Walker was about twelve miles offshore and slowed to take a cast of the lead. A schooner was observed at one point on the starboard bow and, by the time the Walker resumed on its course, the schooner had crossed its bow. Seawell came to starboard to open up the distance between the two ships, but the schooner came to port making collision inevitable. The schooner struck the Walker on the port bow, recoiled and struck the steamer again close to amidships, and then passed down the port side and continued on without stopping.

Seawell notified the captain, mustered men from below on deck, sent men down to attempt stopping leaks with mattresses and canvass, and manned pumps. However, the damage was too great. The mainmast was also chopped down to provide additional flotation for the crew as the port boats had been crushed and carried away. When it became apparent the ship would not stay afloat and boiler fires had been extinguished by the rising waters, the crew lined up and without pushing or panic commenced loading the boats. When the boats were loaded to safe limits, the order was given to ‘shove off’ leaving about thirty men on deck including Seawell and Guthrie. Unfortunately, as the vessel went down, the mainmast became fouled in the boat davits and was carried under leaving little to which the remaining crew could cling. Seawell and the captain were the last two off the vessel. According to a contemporary newspaper account, Seawell “… waited until the vessel took the last plunge and then jumped head foremost into the sea…. As he sprang forward one of his feet became entangled in a rope attached to the part of the vessel upon which he was standing and he was drawn down till the steamer reached the ocean floor. Mr Seawell’s sensations were doubtless strange, as he was twisted around several times by the eddying waves….” He attempted to cut the rope, but before he could do this, “… he felt himself rising to the surface again, and as he ascended, he experienced the same spiral motion … but in reverse order….”

Seawell was lucky. Twenty men perished that night and at least one more a few days later from injuries sustained in the accident. The men in the boats and those lucky enough to find floating objects were rescued by a passing schooner and transported to Cape May from where they were ultimately brought to the Brooklyn Navy Yard. As for Guthrie, although he survived the sinking of the Walker, he was eased out of the Coast Survey. With the advent of the Civil War, he joined the Confederacy. In May 1863, he was in command of the Confederate States Ship Chattahoochee when its boiler blew up killing eighteen men. He was an unlucky man under any flag.

A disturbing aspect of this tragedy is that Alexander Dallas Bache, the Superintendent of the Coast Survey at the time, did nothing to memorialise the men who died in this tragedy. In addition, there was never an official inquest into the causes of the accident and no official placing of blame. Bache’s primary concern in the Coast Survey Annual Report for 1860 seemed to be the loss of production that would ensue and the need for procuring a replacement steamer as soon as possible. Perhaps because of the American Civil War, greater events overtook the loss of this small vessel and its memory was lost to history for over a century. However, even today it remains the greatest loss of life from any single accident of a predecessor to the United States National Oceanic and Atmospheric Administration (NOAA). To rectify this oversight and properly commemorate the sacrifice of these men, NOAA and the Oceanographer of the Navy held memorial services this year to honour their memory. NOAA’s memorial service was officiated over by Rear Admiral Gerd Glang, the Director of the Office of Coast Survey as well as the US National Hydrographer. In addition, two NOAA vessels held services in the vicinity of the final resting place of the Walker. The NOAA ship Thomas Jefferson and the NOAA Marine Sanctuaries Vessel SRVX were in the area for post-Hurricane Sandy surveys and were tasked with investigating a likely target determined by Joyce Steinmetz, a marine archaeologist from East Carolina University, who is quite knowledgeable concerning shipwrecks of the New Jersey coast. The Jefferson conducted multibeam surveys of the wreck site and a team of archaeological divers from the SRVX inspected the wreck and positively identified it as the Walker. The story of their work and the history and methods of discovering the Walker will be the subject of the next installment of the history column.