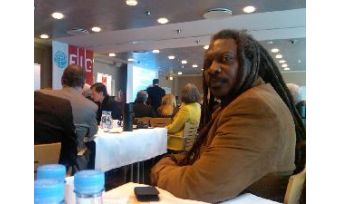 As chair (2011-2014), Commission 4, International Federation of Surveyors (FIG), I greet you with all best wishes for 2011. The honour of the position from which I now communicate with you was confirmed in Copenhagen, Denmark on Friday, 26 November 2010 at the FIG’s Handover Ceremony. The Handover Ceremony was the official ‘changing of the guard’ that affected the presidency of FIG, its Council, and the leadership of its 10 Commissions. New FIG president, Cheehai Teo from Malaysia, took over from Stig Enemark whose presidency was acknowledged as moving the geomatics profession forward, especially with regard to bringing the organisation and its importance to world issues to the attention of international financial institutions such as the World Bank and the Food and Agricultural Organization. Apart from Commission 4, the new Commission chairs for 2011-2014 include Leonie Newnham (Commission 1), Steven Frank (Commission 2), Yerach Doytsher (Commission 3), Mikael Lilje (Commission 5), Gethin W. Roberts (Commission 6), Daniel Roberge (Commission 7), Wafula Nabutola (Commission 8), Frances Plimmer (Commission 9) and Robert Sinkner (Commission 10). More details on the ceremony have been posted on the FIG website 1.

Marrakech
The Commission’s next meeting will be held on 18 May during the FIG 2011 Working Week ( 2) which is set for 18 -21 May 2011 in Marrakech, Morocco. The conference is co-hosted by the Ordre National des Ingénieurs Géomètres topographes (ONIGT), the Moroccan order of surveyors.

Four technical sessions with 24 presentations will be hosted by Commission 4: Hydrography- Assisted Monitoring, Hydrography in Practice. Hydrography and the Environment, and Marine/Coastal Modelling and Technology.

The theme is ‘Bridging the Gap between Cultures’, rather appropriate for Marrakech, a meeting place for Arab, African and Western Cultures, strategic to FIG’s Africa Task Force and Commission 4’s working group 4.5.

Climate change, an important contemporary international issue, is important to FIG. Geomatics professionals, including Hydrographers, play important roles in climate change research. As such, FIG has created a Task Force on Climate Change and Commission 4 is taking steps to participate in this initiative.

Commission 4 has a new publication, namely, Guidelines for Planning, Execution and Management of Hydrographic Surveys in Ports and Harbours, FIG Publication 56 ( 3).

Commission 4 moves into the future with confidence. With the support of its international delegates and officers, the Commission expects to make significant contributions to the field of hydrography over the next four years.