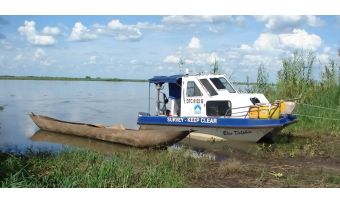 Most continents have long histories of utilising their waterways to facilitate trade but, with a few notable exceptions, Africa has not yet taken full advantage of possible riverine trade systems.

A riverine outlet to the sea from a landlocked state could provide direct access to the world markets and it could establish new inter-modal transport networks that will combine water, rail and road transport systems, which will significantly reduce the cost of imports and exports from and to these countries and make them more competitive on the domestic, regional and global markets. In addition, it could promote sustainable growth of these States through the development of an integrated system of physical and social infrastructures, eco-tourism, energy and mining and a new enabling environment for local and foreign investors in these countries.

Part X of the United Nations Convention on the Law of the Sea (1982) (UNCLOS) details the responsibilities of the States concerned and their rights enshrined in this Convention.
Pre-Feasibility Studies would have to be conducted and the following issues would have to be considered as vital in any agreements made to establish a waterway. They include
1) The final position and extent of the proposed corridor
2) How the costs of the system would be borne
3) How the corridor would be maintained
4) What priorities would be established for its use, what regulations would be necessary. How the responsibility for facilities such as docks, locks, lights, charts, communications, traffic-control, rescue services, surveying updates of the river bed and environmental protection would be assumed, at what cost and under whose authority
5) The provision of services to, and control of, the international traders at the seaward end of the corridor
6) The adherence to the international standards of the IMO and to the technical standards and required services as stipulated by IALA, the IHO and any other relevant standards. A Waterway Authority should be established, with the necessary delegation for decision making and have at least the following responsibilities:
a) the provision of accurate and up-to-date information on the waterway
b) ensuring that up-to-date charts, sailing directions and other vital information on the waterway are available
c) the introduction and policing of traffic rules
d) the promulgation of the technical and safety requirements for the vessels
e) the protection of the environment
f) the development of other facilities on the rivers including cross-channel ferries, bridges, coordination with other means of transport that could be associated with the waterway traffic and structures in the vicinity that could affect the nature of the waterway
g) seaworthiness of the vessels
h) the monitoring of the standard of the crews
i) control of dangerous goods
j) aids to navigation and dredging
k) vessel control centres at critical points
l) the assessment of National legislation that may be affected
m) the dues that would be payable

While these tasks may appear onerous, the ultimate benefits of a well surveyed and controlled waterway would far supersede these considerations to the benefit of all concerned.