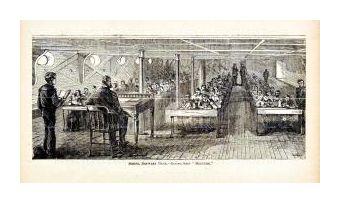 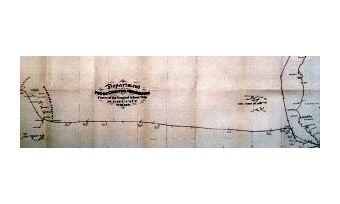 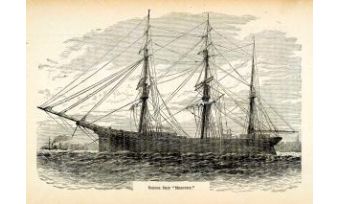 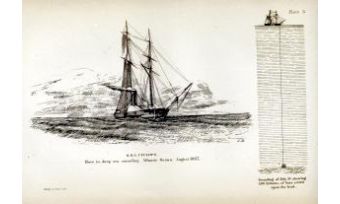 During the pioneering years of deep-sea sounding it became apparent that sounding from a sailing vessel often gave improbable results because of the drift of the vessel and the inability to maintain a perpendicular sounding line. In early 1840, Sir James Clark Ross overcame this problem by mounting a sounding reel on a ship’s boat. During sounding operations, this boat was held directly over a vertical sounding line while held in place by two other small boats acting as oar-propelled thrusters. However, attempts to sound from drifting ships continued for a number of years. Whether sounding from boat or ship, the problem was exacerbated by the inability to discern when or if a sounding line had reached the bottom. This led to early ‘bathymetrists’ reporting depths of over 8,000 fathoms on occasion.

US Navy Lieutenant Matthew Fontaine Maury, a leader in exploring the seas during the mid-19th century, began experimenting with deep-sea sounding in 1849 when he procured the use of the small schooner Taney and equipped it with a reel of wire sounding line. That he initially ignored Ross’s method is apparent from his Explanations and Sailing Directions to Accompany the Wind and Current Charts, Third Edition, published in 1851. Concerning the Taney’s one attempt at deep-sea sounding which netted a result of 5,700 fathoms, Lieutenant J.C. Walsh, commanding officer of the Taney wrote: “This vast depth, greater than the elevation of any mountain above the surface, and the greatest depth of ocean ever yet measured, was reached without finding bottom, in latitude 31 59 N., longitude 58 43 W., on 15 November 1849. The wire broke at this length, 5,700 fathoms, at the reel…. It preserved the exact plumb line throughout the sounding; there was a steady, uniform increase of weight and tension; no check whatever in any instant of its descent, which proved it could not have touched bottom before the break. It had been carefully measured and marked, so that the ocean here is deeper than 5,700 fathoms, can be relied upon as accurate.” In spite of assurances of accuracy, this reported depth was more than twice the true depth at this location.

However, because of this experience, Maury lost faith in sounding with wire. Consequently, in 1851 he began a programme for providing ships of the United States Navy with thin flax sounding line with a breaking strength of approximately 60 pounds and a supply of weights for engaging in deep-sea sounding efforts. To justify this programme, he presented such arguments as “The bottom of the Atlantic Ocean, indeed, I might say, the bottom of what the sailor calls ‘blue water’, is, with here and there an exception, all over the world, as unknown to us as is the interior of the other planets of our system.”

Over the next two years, among the most energetic of these early bathymetrists were Lieutenant William Rogers Taylor, executive officer of the USS Albany, who wrote an extensive report on his experience sounding off the ship, and Lieutenant Commanding Samuel Phillips Lee of the brig USS Dolphin. Lee modified the sounding method of Ross and sounded from a single boat under oars while deploying a narrow fishing line with relatively light weight. During the cruise of the Dolphin in 1851-1852 (see Volume 12, Number 10 of Hydro International for further information on this cruise), Lee obtained 15 successful deep-sea soundings ranging from 790 to 2,210 fathoms. He noted in Maury’s 1853 edition of Explanations and Sailing Directions: “Bottom was certainly got at each of these casts. Sounded from a whale boat always; generally used two 32lb. shots on small fishing line stuff…. and by using two oars, as the wind and sea made necessary, prevented drift, kept the line running ‘up and down’ and the weight of the boat off the shot …. a good sounding may be had with good line (which we have not) from a boat in any weather in which it can be lowered safely.” Maury was strongly influenced by these results and included the following directive in his 1854 edition of the Explanations and Sailing Directions: “The sounding should in all cases be taken from a boat and not from the vessel. The boat with its oars can be kept over the line, whereas the vessel will drift.”

As more deep soundings were reported, Maury became convinced that the greatest reported were in error and he either dismissed or noted as doubtful most observed depths greater than 4,000 fathoms. In the 1855 Seventh Edition, he noted almost 240 valid depths of which only eleven were over 4,000 fathoms in the North Atlantic. He once again admonished those engaging in the art of deep-sea sounding “as to the importance of always [Maury’s italics] sounding from a boat…” This continued emphasis on deep-sea sounding from small boats seems to have stifled further attempts at sounding. In the Eighth Edition in 1858 he had received no additional soundings and repeated the same tabular listing of soundings as in the 1855 edition. In 1858, he included the following notation in capital letters in reference to sounding: “A BOAT SHOULD ALWAYS BE USED.” The captain with the greatest number of boat soundings as of 1855 was Lieutenant Commanding Otway Berryman, USN, who had supervised the acquisition of 100 deep-sea soundings while commanding the USS Dolphin in 1853. He was also the first to use the ‘sounding machine’ devised by Lieutenant John Brooke, which in reality was a bottom sampling device that provided proof that the bottom had been reached.

Ironically, it was Berryman who in 1856 made a line of soundings from Newfoundland to Ireland and dispelled the notion that sounding from boats was a necessity. This was true for sailing ships under ordinary circumstances; however, for mechanically propelled vessels it was a fallacy as the vessels were able to maintain station and keep the sounding line vertical. Berryman sailed in the USS Arctic, a screw steamer, over ground that Maury dubbed the Telegraphic Plateau. Berryman also used a mechanical sounding device called Massey’s indicator that used an impeller which rotated as the instrument descended but locked with the deepest depth noted upon ascent instead of line and sinker technology. Berryman incurred further wrath by reporting his findings to the British press upon arriving in the British Isles. Because of these reasons, Maury did all he could to discredit Berryman’s work even to the point of requesting that the British government send out a sounding expedition to go over the same ground. This sounding expedition, led by Lieutenant Joseph Dayman on HMS Cyclops, although giving a slightly different profile, basically repeated and verified the Berryman work. Dayman, like Berryman, worked from a steam vessel reinforcing the demise of deep-sea sounding from small boats.

There were few if any additional deep-sea boat soundings made by the US Navy in spite of Maury’s exhortations to the contrary. Ironically, the final hurrah for deep-sea boat sounding was destined to come from an improbable source. Following the example of a number of earlier experiments in sending young men in danger of following a life of crime to ‘school ships’, in truth floating reformatories, the New York City Department of Charities and Correction obtained the clipper ship (sail only) Mercury in 1870 to provide a nautical school for seemingly incorrigible youths or those in danger of becoming “vagrants, or fall[ing] into their former wicked associations.” Because of the rapidly increasing number of these ‘unruly’ young men, the school ship was established to provide “for them a sure and honest means of livelihood suited to their adventurous spirit” and also to relieve the pressure on the Department of Public Charities and Correction.

In orders dated 13 December 1870, the following paragraph was included “You will, as often as may be practicable, take soundings of the bed of the Atlantic, on or near the line of the Equator, from the coast of Africa to the mouth of the Amazon.” The ship also was instructed to take serial water temperatures, measure currents, and observe animal life. The Mercury sailed on 20 December 1870, from New York under the command of Captain Pierre Giraud with 250 miscreants assigned to the school. The ship visited the Azores, thence Sierra Leone on the African coast, thence Barbados, and finally returned to New York via the Caribbean. The last deep-sea soundings ever made by small boat were taken on the last two legs of this voyage.

Captain Giraud described the sounding methodology thus: “Two spherical shots, weighing thirty-two pounds each, were used at every cast as a sinker, the sounding-line made of cotton, one-seventh of an inch in diameter, capable of sustaining one hundred and sixty pounds in the air; the cord carefully waxed to overcome, as much as possible, the resistance of the line from friction of the water. All soundings were made from a boat, as repeated trials satisfied me that no reliance could be placed on those made from the ship, on account of the difficulty of keeping the vessel in position and the line “up and down.” A boat, fitted expressly for the purpose, with a reel holding four thousand fathoms, working on friction rollers, the line passing over the bow through a leader, thus enabling the boat, with the aid of oars, to be kept in position and the line perpendicular on the shot, thus determining to a certainty when the sinker reached the bottom.”

By the standards of the time, the work of the ’unruly’ boys of the Mercury was quite accurate. A year later, the Challenger expedition departed from England. Sir William Thomson also devised the first successful piano-wire sounding machine which made hemp rope and sounding with flax or cotton line obsolete. Coupled with the widespread use of mechanical propulsion systems, deep-sea boat soundings passed into the realm of ocean science history. The 19 deep-sea soundings obtained during the cruise ranged from 500 to 3,100 fathoms. Bottom samples were obtained for 11 of the soundings. In looking back, it is hoped that the experiences of the young men on the Mercury reclaimed them from their “errors, caused by … evil associations, or ungovernable tempers” that were “fast impelling them to ruin” as they were taught “the duties of a profession, which … provides for them the means of an honest and useful livelihood” as well as advancing “the cause of science.”