Cold water coral reefs, notably the stone coral Lophelia pertusa, have been found extensively in deep Arctic waters such as the Norwegian Sea. The use of multibeam echosounding, together with advanced visualisation and analysis tools, has been a key to many spectacular discoveries. The world's largest cold water coral reef - the Røst Reef - was mapped in detail in October 2002. Located in the dramatic setting of a large submarine slide, this provides an excellent example of how catastrophic geological processes can create special marine habitats.

Another major reef complex - the Sula Reef - demonstrates how mounds select specific geological features as their habitat and the key role of multibeam acoustics in deciphering these relations. It also provides some hints on how coral reefs were recognised with ‘stone age’ technology.
Coral reefs form important components of marine ecosystems but are vulnerable to human activities such as bottom trawling. Normally associated with tropical waters, over recent decades an amazing number of reefs have been reported in North Atlantic waters during hydrocarbon industry pipeline investigations, from scientific surveys and from fishermen.

The Sula Reef - Acoustic Surveys
Some of the very first acoustic indications for coral reefs in Norwegian waters came from sparker profiles crossing the Sula Reef (Figure 2), or Sula Ridge as it was known then. Acquired by IKU (Institute for Continental shelf investigations) in 1973 as part of a regional shallow seismic programme, these early records showed diffuse structures bravely (and correctly) interpreted as coral mounds. Later, the introduction of multibeam echosounding systems represented a breakthrough in our ability to acoustically image these mounds. While the typical area represented by a single beam echo-sounder depth measurement is in the order of 500 to 1,000 m in the Norwegian Sea, multibeam echosounders can do far better. Depending on water depth, equipment type and survey settings, the hull-mounted multibeam echosounder may give a depth recording covering a few meters in typical shelf depths Ð ranging from to 200 to 500 mbsl.

Coral Habitat Selection
The Sula Reef is a 13km long and 400m wide reef complex, with more than five hundred coral mounds. The mounds occur solitarily or grown together in ridges. The majority of mounds are found along the Sula Ridge - a bedrock ridge formed by a resistant sandstone layer. Looking in greater detail at the distribution of these mounds, shaded relief images based on multibeam bathymetry reveals an echelon arrangement of the mounds in relation to the ridge. The mounds grow selectively on top of low sediment ridges crossing the bedrock ridge. These sediment ridges (flutes) were created more than ten thousand years ago beneath a major ice sheet extending into the shelf area.

Backscatter?
Multibeam echosounders can produce georeferenced backscatter data simultaneously with recording the depths. Despite the fact that it is difficult to process the data such that properly normalised, noise-free images can be produced backscatter data provides important information. Generally, high backscatter intensity indicates hard bottoms, while low reflectivity indicates softer, perhaps muddy bottoms. Furthermore, a variety of statistical parameters can be analysed giving measures on, for example, roughness, and may provide a basis for segmentation and classification.

An Intriguing Pattern
In order to study the backscatter information more efficiently, we integrated this data with morphology by draping the backscatter over a 3D terrain model. As expected, the muddy basinal area gave low reflectivity, just like the troughs created by iceberg plough marks. The unexpected finding was the large variability in reflectivity displayed by the coral mounds. This reflectivity range spanned several tens of dB, and this large variability is also evident when we compare mounds from different geographic settings Ð including fjords and coastal settings. Speculations put forward regarding this hitherto unresolved issue has included the abundance of sponges, differences in skeletal structures as a result of growth rate and differing proportions of dead versus live corals.

The Røst Reef - World's Largest
Discovered by the Institute of Marine Research in May 2002, this reef complex was mapped in detail in October 2002 using an EM 1002 echosounder onboard the FFI vessel H U Sverdup II. The geological setting of this reef complex is spectacular Ð situated along the back wall of a giant submarine slide which according to scientists at the University of Tromsø took place four thousand years ago. Steep, dissected ridges, several tens of meters high, occur in an up to 2km wide back wall zone seaward from the shelf break. Abundant coral mounds occur on the flanks of iceberg plough marks on the shelf However, the largest concentration is found on the ridges in the uppermost part of the back wall zone.

Image Processing
Slope gradients can be extracted from multibeam bathymetry, and has proven to be useful for acoustic recognition of coral mounds. This gives such data a great advantage over conventional sidescan sonar data, which normally provides better sonar data but no bathymetry. Image processing confirmed the presence of iceberg plough marks and coral mounds identified on the shelf from ordinary shaded relief images but gave more information on the deeper, more irregular back wall zone. A number of circular mounds could be identified using the slope gradient technique. These mounds will be the target for future ground truthing, particularly using ROV onboard the new IMR vessel G.O.Sars.

Way Forward
Our ability to image the seafloor, its animal communities and geological features and processes has advanced dramatically only during the last decade. This is critical for the sustaining of ecosystem-based management of our marine areas Ð a high priority both on national and European levels. Still, there is a long way to go. We need better tools with higher resolution in order to decipher the processes and relationships, for example those between cold seeps emitting gases or fluids and benthic communities to be found in ‘biodiversity hot spots’ potentially caused by these processes. Emerging techniques like Synthetic Aperture Sonars or, perhaps, laser scanning imaging techniques may be of use here. Well-equipped AUVs may prove to be a key for improving our data acquisition and quality. Anyway, our present knowledge of the deep oceans is very limited and we have only just started to grasp what is down there. 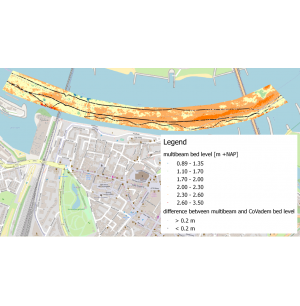 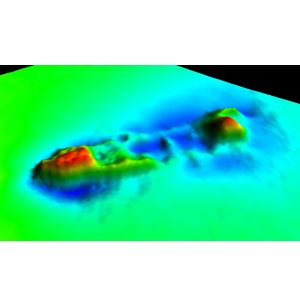 Hydrographic Surveying: Where Do We Stand? 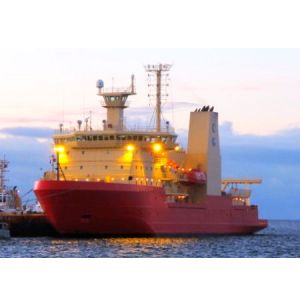