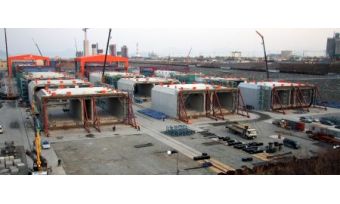 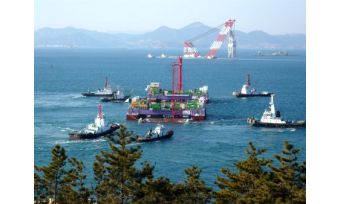 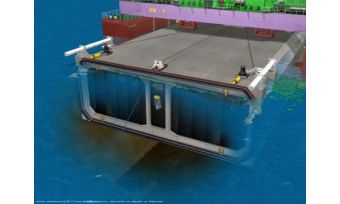 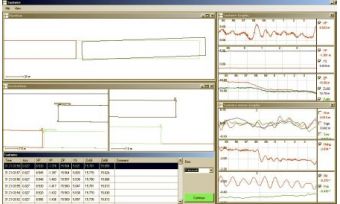 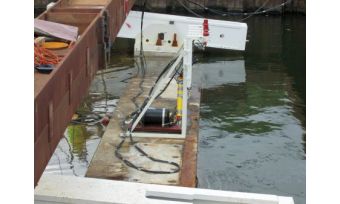 Netherlands-based positioning specialist Geocon was awarded a contract for the immersion of one of the deepest and longest immersed tunnels in the world, in South Korea’s Jinhae Bay. Together with its sister company, Strukton Immersion Projects, the main contractor for the immersion operations, Geocon completed the job within the specified time and budget.

In March 2007, immersion specialist Strukton Immersion Projects (like Geocon, a business unit of Netherlands-based construction company Strukton) was contracted to immerse a 3.2-kilometre long tunnel in South Korea’s Jinhae Bay. The operation was to be carried out up to 1.5 kilometres from shore, at a direct intersection with the East Chinese Sea and the Pacific Ocean. Jinhae Bay’s deepest point is 50 metres with an undercurrent of 2 metres per second. In this area, typhoon-induced 8-metre waves are no exception. Strukton Immersion Projects was given three time frames within which to complete the task, namely the winters of 2008, 2009 and 2010; the probability of typhoons being lowest during that season. There was no margin: less than four years after the signing of the contract, the tunnel had to be traffic-ready.

The tunnel was divided into 18 manageable elements, each 180 metres long, 10 metres high, 26 metres wide, and weighing approximately 48,000 tonnes. Four batches of tunnel elements were built in a dry dock that could hold up to five tunnel elements at a time, see Figure 1. After finishing each batch, the precast yard was flooded and the construction dock door removed. The tunnel elements were floated up and trimmed one by one with the ballast water system inside the tunnel element. Given their imposing size, transporting the elements would be no easy task. During their 40-kilometre journey from the dry dock to the immersion site, they would be able to withstand swells of no more than 30 centimetres. At only 0.025m allowed deviation from the design position, the margin for the connection of the elements at a depth of 50 metres was minimal. Given the dimensions and weights involved, it was clear that precision would play a pivotal role in ensuring the success of this project. There are no standard solutions for reliable immersed tunnel positioning in these extreme conditions.

Measurements for immersion operations are usually taken using a tacheometric system consisting of three total stations onshore and prisms fixed to the access shaft of the element prior to immersion, see Figure 2. This is a traditional, tried-and-tested method that Geocon has been using for more than two decades. Provided the top of the shaft is high enough to remain above water and the immersion activities are carried out close enough to the shore accurate positioning is possible. However, the 3.2-kilometre tunnel in South Korea’s Jinhae Bay was to be immersed more than 1.5km from shore at a depth of 50 metres – too far for the total stations to be able to provide reliable measurements and too deep for practical use of access shafts. Geocons answer to this problem was a proprietary underwater measurement solution, consisting of a combination of existing and newly developed systems.

The combined survey system has an increasing accuracy from the transport phase up to the joining of the tunnel elements. A total of four new survey systems were used for the immersion. For the first tunnel elements the traditional survey method with shafts was used to validate the newly developed systems.

Transport and Positioning above Immersion Trench

The third system, a USBL system, was used as a backup of the tautwire. This acoustic survey system consists of a transducer and several transponders. The transducer, mounted on the primary side of a tunnel element, transmits an acoustic signal. This signal is received by the transponders mounted at known positions on the previously immersed tunnel element. The transponders reply to the transmitted signal with their own acoustic tone which is subsequently received at the transducer. A sound velocity sensor is mounted near the transducer. The speed of sound is frequently updated in the USBL software. This software outputs forward, starboard and depth values for each transponder. The Geocon immersion software processes these values to an actual position of the tunnel element. The accuracy of this system is +/- 0.15m.

In the final phase of the immersion process, the Gina gasket is pulled against the steel end frame of the previous tunnel element to obtain the initial water tightness necessary to empty the immersion joint. For this phase, distance sensors were developed to provide accurate measurements. With their range of 0.4m, the four distance sensors are extended just before the moment the Gina gasket touches the previously immersed tunnel element. The sub-millimetre accurate readings of these sensors where used in several ways. The reading of the stroke-length is a direct indication of the distance. Using the four distance sensors on each corner of the primary side of the tunnel element (Figure 3) a conclusion could be drawn about the position of the secondary end from the differences in the readings of the sensors. The accuracy of this fourth immersion survey system is +/- 0.005m at the primary side, and +/- 0.02m at the secondary side.

To determine the final position of the tunnel element after immersion a decisive survey is performed by measurements inside the tunnel through the bulkhead doors using land survey techniques. The accuracy of this final measurement is +/- 0.005m relative to the previously installed element. As the tunnel was getting longer, the accumulated total station data resulted in a declining accuracy as a result of poor geometry and poor survey conditions. Large variations in humidity, temperature and line of sight due to construction works inside the tunnel influenced the survey conditions considerably. The angular reliability of the geodetic network inside the tunnel decreased with the tunnel length. Therefore, the geodetic network inside the tunnel was strengthened using land survey gyroscope observations. This instrument measures the true heading at several chords throughout the tunnel with an angular accuracy of 0.001º, equal to 0.015m/km. The headings measured with the total station are dependent of the accuracy of the preceding survey points that are used in the tunnel. The gyroscope observations on the other hand are independent. The total stations measurements were corrected with the gyroscope observations. With this corrected data the as built tunnel alignment was determined resulting in an accuracy of +/- 0.02m at 3.2km.

All of the measurement data was integrated using Geocon’s proprietary software, converted into real-time position data, and presented to the immersion operations supervisor. All of these sensor systems yielded a wealth of data: absolute positions, headings, rolls, pitches, relative position data and data quality indicators. There was a real danger of the immersion team leader not being able to see the wood for the trees. Through the sober but adequate layout of the Geocon software only the bare minimum of relevant parameters was presented to the supervisor, see Figure 4 (more to the top of this page).

Given the nature of the immersion operations, this was the only right decision. The actual immersion of the tunnel elements was a tense, three-day operation that required non-stop concentration. Over the course of those three days, divers, surveying technicians and other experts formed a highly skilled team that did what was needed to make the operation a success. Final decision-making responsibility lay with the immersion operations supervisor, who worked from the command post, where Geocon presented the measurement data.

A proud South Korean president opened the tunnel to the public in December 2012. At home, the Dutch engineers received a variety of prizes for innovations, while their activities also enjoyed considerable interest from abroad.

Later that year, Geocon embarked on a tunnel immersion project on the river IJ behind Amsterdam’s Central Station. The tunnel is part of the new North-South metro line that will pass through the heart of the city centre. Geocon used the immersion of the three elements to further develop its proprietary measurement systems. The acoustic system that served as a backup in Korea has now been improved and tested, and with their LBL configuration, the latest CPAP and cNODE transducers achieved a precision of between 1 and 2 centimetres during the immersion process, see Figure 5.

On this project, Geocon worked closely with the Norwegian manufacturer Kongsberg, in a partnership it intends to continue for future projects. In this respect, the measurement systems circle is now complete, in that Geocon has all the techniques at its disposal to provide the necessary certainty in future immersion operations.

Bart-Jan Ruesink has a background in Civil Engineering and worked as a construction surveyor on a number of construction projects in the Netherlands. He has been responsible for the immersed tunnel systems at Geocon since 2007 and has been involved in 25 immersed tunnel positioning operations on projects in South Korea, Ireland, Italy and the Netherlands.