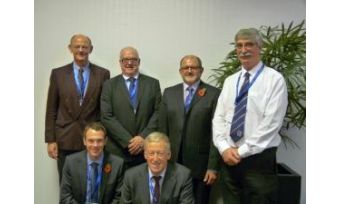 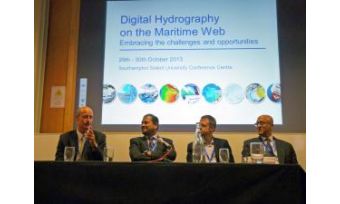 The annual multi-day event organised by the International Federation of Hydrographic Societies (IFHS) was this year somewhat less exuberant than the usual Hydro conferences. Last year we had Hydro12 in Rotterdam, next year we will have Hydro14 in Aberdeen. The gathering for 2013 took place in Southampton, UK, on 29 and 30 October 2013.

The UK Hydrographic Society filled the gap between the years by organising this smaller version, in association with the IFHS and the Inter­national Hydrographic Organ­ization (IHO). Smaller, but not necessarily less interesting. The number of delegates was around 65, with many participants having leading positions in government and industry. Although the conference did not have the objective of making decisions on future developments, the conference format allowed a most interesting exchange of views.

The event in the Southampton Solent University Conference Centre was sponsored by Esri, as principal sponsor, and by Caris, ITIC and QPS. The exhibition in the refreshment room also provided space for OceanWise and TeamSurv. At the end of the first day a drinks reception was organised, sponsored by ITIC and QPS.

The User’s Perspective
The keynote speech was ‘A view from the bridge’ by Capt Harry Gale, technical manager of the Nautical Institute in Southampton. Next Mr Ole Berg addressed e-navigation, the transition from the navigating navigator to the monitoring navigator. The lecture by Capt David Wheal was titled ‘The question facing us is not how much work the human can do safely, but how little’. One of the main items of the subsequent discussion was how to make good use of the Zones of Confidence categorisation. Or should we perhaps not give the ZOC principle much emphasis but use the navigation surface instead.

Products – Quality and ­Presentation
A playful but interesting distinction made by Rear Adm Nick Lambert in his keynote speech ‘The user’s faith in technology’ was between digital immigrants, born before 1990, and the youngsters of today as digital natives. The lectures of the session provided technical details, for example, how to achieve really quick ENC updates with frequent survey data in highly dynamic estuaries like the Humber. During the panel discussion various examples were given, whereby participants highlighted still existing misunderstandings and false perceptions of existing chart products and systems. Here, concerns where shared that future users might lack appropriate basic training and operational knowledge and might therefore put themselves and their ships at risk when using highly complex and demanding ECDIS systems.

Survey Innovation
The limitations and future developments of satellite multispectral imagery were discussed along with the possibility to develop bathymetric applications based on other satellite techniques, such as SAR. A framework for data quality assessment and usefulness of crowdsourcing was discussed and further clarifications were sought. The panel was also questioned on the perspective to see alternatives other than acoustic or laser techniques emerge in the future. The need to ‘educate’, rather than ’train’ future surveyors so that they can adapt and foster innovation was stressed.

Training for All
Keynote speaker Mr Nicholas Seube is head of the leading French civil hydrography education at ENSTA in Brest and the newly elected chair of the International Board on the Standards of Competence for Hydrographic Surveyors and Nautical Cartographers.

The standards provide a useful framework for the education of internationally operating surveyors. The other speakers in the session were Capt Zakirul Bhuyan with a critical view on ECDIS display management and Dr Richard Thain inviting a scheme of individual rather than institutional recognition. All participants of the ensuing panel discussion agreed that proper and extensive basic training of elementary navigation skills will remain a top prerequisite, no matter how ‘clever’ modern navigation systems may become. Furthermore, the need for participation in an extensive generic ECDIS course was deemed necessary.

The organisers of the mini-Hydro event were praised for the effective and efficient arrangements, as shown, for example, by the very well laid-out delegate handbook, Special Publication 60.