New on the move approach of calibration for vessel navigation sensors 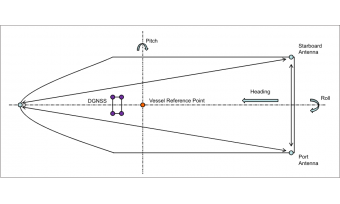 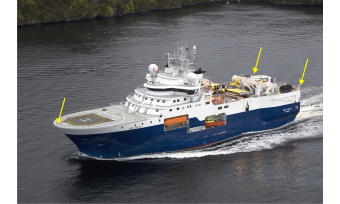 Over the years there has been a requirement to calibrate navigation (heading and motion) sensors and verify DGNSS systems on vessels working in the offshore oil industry. These calibrations are a requirement of oil companies and need to be undertaken prior to commencement of a project and/or at regular intervals throughout a project. This article covers the techniques and accuracies related to applying GNSS technology to vessel sensor calibration and verification.

The first step in the preparation for dynamic calibrations is to install three or more GNSS antennae (with associated receivers) on the superstructure of the vessel. These antennae mounts must be rigid and located in positions that optimally define the vessel’s heading, pitch and roll and should have an open view of the satellites with as few obstacles as possible. Nominally, one is mounted in the bow and two at the stern (port and starboard side) as indicated in Figure 1.

Once installed, these antennae positions must be precisely coordinated within the vessel’s local coordinate reference system to an accuracy of ± 3mm system using precise dimensional control techniques. This is normally a ‘one time’ task as the antenna and/or brackets are left in place on the vessel between calibrations.

In order to collect data to undertake the calibration, GNSS raw code and carrier data are data logged by the GNSS receivers at these three antennae. Based on our current experience, 4 hours of data at a 1Hz update rate is sufficient to produce good results. Once the logging session is complete, the logged GNSS data is transferred from the receivers and converted into uncompressed Rinex format and is then ready to be processed.

Simultaneously with the raw GNSS logging, data from the vessel sensors (heading sensors, motion sensors and DGNSS Systems) are also logged at 1Hz data rate time tagged in UTC such that it can be matched to the processed GNSS data during the calibration computations. The requirements for vessel sensor data logging is as follows:

Upon completion of the vessel data logging, the calibration and verification data should be reviewed and converted into ACSII files.

All the logged data can be transferred from the vessel to Fugro Survey by use of a secure FTP Site. In addition to the logged data, vessel metadata is also received. This includes:

Upon receipt of the data by Fugro Survey an initial quality control process will be undertaken to ensure all the required data and metadata have been received.

Once the data has been checked, the raw GNSS Rinex data from the reference receivers is processed in two stages:

As Fugro Survey can also deliver DGNSS systems to a number of our dynamic calibration customers, which also require verification, all the GNSS processing is undertaken using third party software. No Fugro algorithms are used in the computational process, which ensures the independency of the results obtained.

Data synchronisation of the GNSS processing and the logged vessel sensors are undertaken and as described the relative vectors from the RTK processing are used to derive the vessel’s heading, pitch and roll values which are compared with the vessel’s sensor observations and correction values with statistics derived for each vessel sensor of interest. Similarly, the absolute positions derived from the PPP processing are used to verify all the DGNSS Systems of interest.

To ensure the quality and accuracy of this technique, it is essential to ensure an optimal installation of the GNSS reference antennae. The following points must be adhered to:

In addition to the importance of optimal antennae locations, the processing software is vital to the success of this technique and the result example presented below are a verification of the effectiveness of the ‘state of the art’ software used by Fugro Survey.

The relative vectors between the GNSS antennae need to be of high quality in order to obtain a good calibration. In the software, the vectors are processed both in the forward and reverse directions and the solutions combined. As an example of the precision of this method data processed from a 4 hour set acquired in transit offshore had a standard deviation of the vector between the two antennae on each end of a 27.7m baseline of 0.005m.

As a verification of these accuracies, the following tables present the results for one vessel calibrated / verified on three occasions during a one month period in 2010. As a reference, the results from a traditional land survey calibration have also been included.

Additionally, the accuracies are confirmed from a later survey in 2012, again with a comparison to a traditional land survey calibration take at the same time.

The reason for the apparently large C-O value is due to the Seapath being installed with its heading alignment approximately 30° to the vessel’s heading.

From the information presented here, it is clear that the accuracy of undertaking the calibration and verification of navigation sensors has been proven to equal that obtained when calibrating by traditional methods. The technique is flexible and the constraints imposed by the traditional land survey methodology are removed.

John Vint graduated from Newcastle University with a BSc in Surveying Science. After university he joined Racal Survey and then via acquisitions worked for Thales GeoSolutions and now Fugro Survey. He currently has the position of survey manager for the Norway operations (based in Bergen), a position he has held since 1999. His specialist knowledge is in the field of satellite navigation.