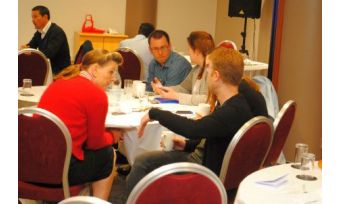 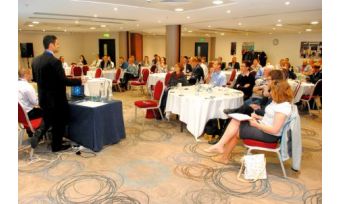 It became apparent that there are many different vehicles for sharing information about marine and maritime geographies. These range from data hubs and portals, through to desktop and web mapping applications, layered PDF documents, and even that most traditional of media - paper maps and charts. Attendees learned that the choice should depend on local circumstances, including the motivation for data sharing and the capabilities of recipients to read data.

Berrit Bredermeier from the Centre for Environment, Fisheries and Aquaculture Science (Cefas), talked of the experiences of Cefas in a major survey project it has been undertaking since 2007 - the British Energy Estuarine and Marine Studies Programme (BEEMS). The project entails Cefas gathering survey data on marine environmental, ecological and local issues relating to the intake and discharge of cooling water by nuclear power stations. Having collected and processed the survey data, Cefas shares its findings with various stakeholders. It does so by creating and distributing maps as layered PDF documents.

For the next speaker, Russell Bird, Group Hydrographic and Dredging manager at Peel Ports Group (top image), the driver for data sharing wasn’t so much ease of use, but rather the speed with which data can be shared through hydrographic charts. By following a standardised process, surveyors at Peel Ports Group can produce hydrographic charts within minutes of a survey being completed. Russell pointed out this ‘just-in-time’ approach is vital when dredging has to be carried out at a particular berth in order to accommodate a waiting vessel and when producing charts for the range of port authorities under the group jurisdiction.

One of the arguments against the use of web mapping in the marine and maritime sectors – that it is too complex – was called into question by Cadcorp. In a live demonstration, Cadcorp staff showed that off-the-shelf web mapping applications can be both sophisticated in functionality, and at the same time capable of being used by non-expert users. Cadcorp demonstrated a web mapping application that changed its behaviour as the user changed his or her behaviour, switching from desktop to tablet and mobile devices. It was argued that such ‘responsive’ web mapping software has the potential to transform the sharing of spatial data in marine and maritime sectors.

GIS technology is a great integrator of diverse datasets and because of this it has the potential to serve as vehicle for bringing together different interests. Marie Pendle reported on an EU-funded marine project being carried out by HR Wallingford, which is designed to put this to the test. The purpose of the project was to evaluate how useful GIS and GI could be in helping determine the availability and suitability of sites for wind farm development along national maritime boundaries in the North Sea Basin. It involved bringing together a number of diverse datasets from different countries. These included administrative/legislative boundaries, shipping lanes, bathymetry, geology, wind strengths, commercial fishing, environmental sensitivities, etc. By representing these datasets as maps, overlaying them, and applying summations to these overlays, an analyst can get an aggregate view of the suitability of different sites. A conclusion of the project was that it would be possible to use GIS and public data for the commercial siting of marine projects, and to understand overlapping areas of interest.

Dr Sean Gaffney gave an update on the work of the MEDIN network designed to provide a single point of access for UK marine data and information. He reported that the MEDIN portal went live as planned in 2010 and now directs users to over 9,500 marine datasets. MEDIN also provides 115 GIS reference layers on many marine topics, compiled by a range of organisations. Layers are categorised using INSPIRE themes, and all layers are available under the Open Government Licence.

We were reminded in a presentation by Caroline Levey of Oceanwise, that using GIS in a marine environment requires functionality specific to the sector. Caroline showed how Oceanwise has extended generic Cadcorp SIS desktop software with workflow extensions to support dredging and licensing, environmental sampling, infrastructure and asset mapping, and the management of hydrographic survey metadata.

The marine sector with its insatiable appetite for survey data can claim it has been working with Big Data for a number of years. Presenters from Cadcorp reminded us that general purpose GIS software often has to be enhanced in order to accommodate the very large datasets generated in marine surveying and modelling applications. Attendees were shown an integration between Cadcorp SIS software and the Lidar processing application, ‘TeraSurf’ from Cadcorp partner Geomod. They saw how TeraSurf can support unlimited bathymetric and Lidar survey data in a memory efficient way, and how the application can coexist with Cadcorp SIS desktop software.

Mike Postle-Haco demonstrated that satellite-based positioning systems such as GPS have not made an understanding of geodesy redundant. He reminded us that latitude and longitude values don’t necessarily define a unique location on the earth. The values only define a unique location when used in conjunction with a defined geodetic datum. Use a different geodetic datum, and you can shift the physical location of the latitude and longitude values. A possible consequence? Vessels have run aground because they have been navigating using GPS transformed to a local datum, against a route survey made against a global datum. 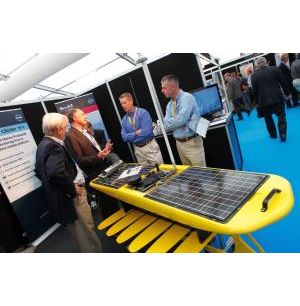