Report on the Five Deeps Expedition 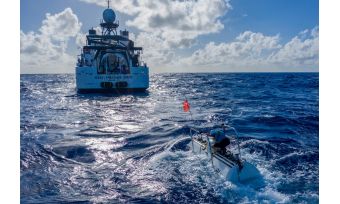 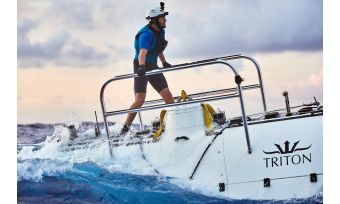 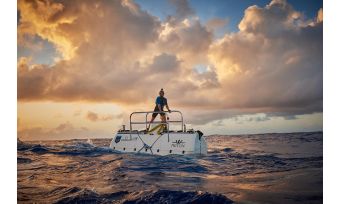 As extreme explorer Victor Vescovo continues his round-the-world expedition to become the first person to descend to the five deepest points in the Earth’s five oceans using the custom-built deep submergence vehicle Limiting Factor, it prompts the question: ‘Do we know as much about the deepest places on our planet as we thought?’

Today, the best global maps of the oceans have a resolution of 30 arc-second grid cells (926m at the equator). Approximately 82% of the grid cells do not include a single depth measurement (Weatherall et al., 2015), and the percentage of the seafloor that has been directly measured by echo sounders is likely to be less than 18% (Mayer et al., 2018).

The recently launched Five Deeps Expedition is a round-the-world trip on a dedicated research vessel equipped with a full-ocean-depth manned submersible and supporting landers. The aim is to send Victor Vescovo, the architect of the expedition, to the deepest point in each of the five oceans within one year. The expedition includes Vescovo’s own company Caladan Oceanic LLC, Florida-based submarine manufacturer Triton Submarines LLC, scientists from the UK’s Newcastle University and the British Geological Survey, expedition company EYOS Expeditions, and the British documentary makers Atlantic Productions.

The primary mission is for Vescovo to dive alone to the deepest point in the Arctic, Atlantic, Pacific, Indian and Southern oceans. The expedition centres around the deep submergence support vessel (DSSV) Pressure Drop which is fitted with a state-of-the-art Kongsberg EM124 multibeam echosounder system, the newly designed and constructed two-person deep submergence vehicle (DSV) Limiting Factor and three full-ocean-depth lander systems to complement the scientific outputs of each dive and to act as sub-navigation points at depth.

Although exploring the five deeps is the primary mission, the expedition has a broader remit with a comprehensive science component including a collaboration with the Seabed 2030 initiative. Seabed 2030 is a collaborative project between the Nippon Foundation and General Bathymetric Chart of the Oceans (GEBCO) that will bring together all available bathymetric data to produce the definitive map of the world’s ocean floor by 2030.

The DSV Limiting Factor is one of the most uniquely capable piloted vehicles of modern times. Rated to 11,000m water depth, capable of carrying two people and optimized for rapid vertical travel, Limiting Factor is compact and lightweight compared to previous ultra-deep capability submersibles. Occupants are housed within a titanium sphere, with three acrylic viewports allowing them to observe the marine environment outside. The exterior is also equipped with four high-definition (HD) video cameras used to record footage of the descent through the water column and – once it reaches the bottom – the surrounding seafloor.

The three scientific landers not only primarily serve as navigation points for the manned submersible, but also deploy an autonomous scientific payload comprising conductivity, temperature and depth sensors, and a suite of baited traps for biological specimens.

One issue that quickly arose during the early stages of the expedition was how to locate the deepest places in each ocean, and how to determine their exact depth. One might expect this to be easy using global datasets such as GEBCO and the ever-omnipotent Wikipedia. However, it soon became apparent while planning the expedition that the information available is fraught with inconsistencies, including erroneous statements perpetuated online and numerous datasets of varying resolution.

Using publicly available global compilations of bathymetric data and peer-reviewed literature, it was possible to confidently identify the Challenger Deep in the Mariana Trench (10,925 ± 12m depth in the Pacific Ocean; van Haren et al., 2017), the Puerto Rico Trench (8,408m depth in the Atlantic Ocean) and the Molloy Deep (5,669m depth in the Arctic Ocean; Klenke and Schenke, 2002). However, the search for the deepest point in the Indian Ocean and Southern Ocean proved much more problematic.

Conflicting reports emerged putting either the Diamantina Fracture Zone or an undefined location within the Java Trench as the deepest point of the Indian Ocean. Furthermore, much of the South Sandwich Trench is in the Atlantic Ocean rather than the Southern Ocean, with the location for the deepest point in the trench recorded as being at a latitude of 55˚S and thus short of the 60˚S boundary between the two, as defined by the International Hydrographic Organization (IHO).

High-resolution bathymetric maps of the hitherto unknown deeps of the world’s oceans, created using the latest-generation full-ocean-depth EM124, will not only allow the expedition to pinpoint the exact deepest point of the five oceans, but will also form a primary dataset for geological and geomorphological analysis and provide the context for research into the biological communities of these deeps.

The most challenging dive was always expected to be the one in the Southern Ocean and the South Sandwich Trench with its reportedly unpredictable seas and short weather window for fieldwork. The deepest point in this trench is documented as the Meteor Deep (8,264m), named after the German research vessel that first sounded it in 1926. As mentioned above, this is the topic of some debate as the Meteor Deep is just north of 60°S latitude and therefore not technically in the Southern Ocean according to the IHO.

The Five Deeps Expedition acquired EM124 data over an area slightly larger than Northern Ireland and travelled approximately 510 miles along the trench axis in January/February 2019. One of the many surprising results from the South Sandwich Trench was that the basin reported as being 8,264m deep in 1926 was confirmed by the Five Deeps Expedition to have a maximum water depth of 8,266 ±13m at 55°13'47"S, 26°10'23"W. On 4 February 2019, Vescovo became the first person ever to dive the deepest point of the Southern Ocean located at 60°28'46"S, 25°32'31"W, descending to a maximum water depth of 7,434 ±13m.

The deepest point in the Indian Ocean is also contentious as it is often reported as being either the Java Trench or the Diamantina Fracture Zone. To resolve this debate, the Five Deeps Expedition surveyed the Diamantina Fracture Zone in March 2019 recording a maximum water depth of 7,019 ±17m at 33°37'52"S, 101°21'14"E for the Dordrecht Deep. Survey work consequently undertaken in April/May 2019 revealed the Java Trench to be a maximum of 7,187 ±13m at a location further west than previously anticipated (at 11°7'44"S, 114°56'30"E), with Vescovo completing his solo dive at this location on 16 April 2019.

Additionally, Vescovo and the Five Deeps team will visit the Horizon Deep in the Tonga Trench, which was long thought to be the deepest place in the world at approximately 10,800m. Their final stop will be the Molloy Hole in the Arctic Ocean. Located west of Svalbard with a maximum depth of 5,669m, this will be the final stop on this round-the-world expedition.

As this article goes to press, the Five Deeps Expedition EM124 survey has refined that maximum depth to 10,923 ±20m. Following Vescovo’s solo dive on that position, DNV GL has declared the LF as classified to 'unlimited diving depth', or >11,000m. 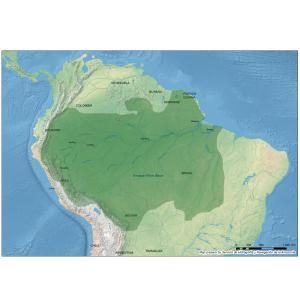