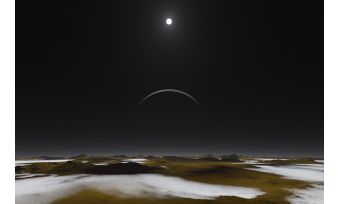 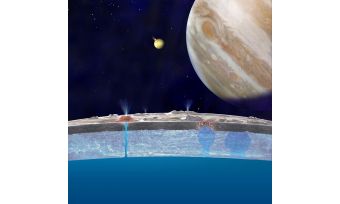 While there is still lots of ocean mapping work to do on Earth, oceans situated elsewhere in our solar system hold plenty of mysteries too, writes Wim van Wegen in this column.

The oceans on our planet remain largely an unexplored world, far from divulging many of their secrets. Seabed 2030, which is a joint project between the Nippon Foundation of Japan and the General Bathymetric Chart of the Oceans (GEBCO), aims to collect all available bathymetric data in order to produce the definitive map of the world’s ocean floor by 2030. As of today (and despite many years of effort), less than 20% of the seafloor of our planet has been mapped.

However, there are more oceans to be mapped; oceans that perhaps turn out to be even more mysterious than the oceans chartered by the Seabed 2030 mission, and oceans situated elsewhere in our solar system. Although we still have an awful lot of survey work to do on our own planet, there is no harm in taking a field trip across the moons of Jupiter and Saturn and even further – to Pluto!

Our solar system – as far as we know – comprises at least eight planets and an unknown number of dwarf planets, with Pluto as the most famous (although I am in favour of rehabilitating Pluto to its status of planet). Pluto is an extraordinary place with – we now know thanks to the exciting New Horizons mission that captured images of the dwarf planet in 2015 – the most remote ocean in our solar system, as most planetary scientists agree that Pluto has a global liquid ocean under its surface. These insights are based on recent analyses of images from NASA’s New Horizons spacecraft. Perhaps I am letting my imagination run wild, but who says this ocean can’t be habitable?

Anyway, to return to our industry: hydrography. Hydrography certainly is a profession that comes into play when mapping liquid environments other than those on our own planet. At NASA, there is a working group known as the Outer Planets Assessment Group (OPAG) Roadmaps to Ocean Worlds (ROW). The overarching goal of this group is to “identify ocean worlds, characterize their oceans, evaluate their habitability, search for life, and ultimately understand any life we find.” Highly fascinating and sparking the imagination all that much more.

My thoughts wander off to faraway ocean worlds, such as the ice-encrusted moons Ganymede (a satellite of Jupiter) and Enceladus (Saturn). Geospatial and hydrographic technology will be useful tools to map the bathymetry of these remote oceans, and Lidar technology has the capability to help explore the secrets of these extraterrestrial marine environments. I can imagine spacecrafts carrying a vessel aboard equipped with a multibeam echosounder, and USVs capable of diving thousands of metres below the surface and conducting extraterrestrial ocean-mapping missions. There are two challenges: such oceans will generally be covered with a thick layer of ice, which might be a minor obstacle before the hydrographic instruments can do their job, and it should be noted that some of these oceans consist of other liquids than water… 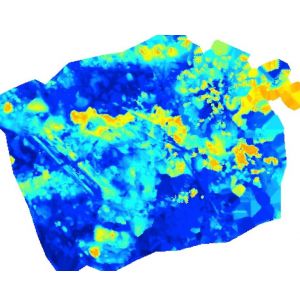