Ensign Niblack Showed Himself to be a Decisive and Courageous Captain 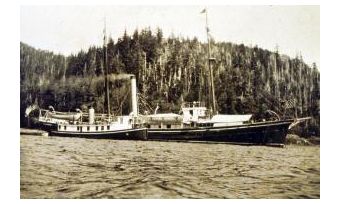 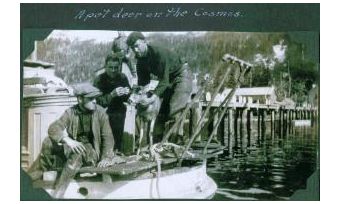 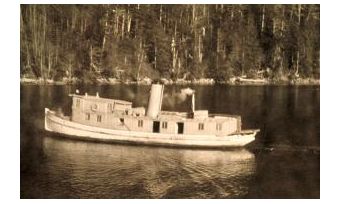 Albert Parker Niblack, third director of the International Hydrographic Bureau from 1921 and second President from 1927, had been an officer in the United States Navy for eleven years when he earned his first command. In 1887, he was thirty years old and had been attached to the Coast and Geodetic Survey Steamer Patterson for the past three years.

He was apparently a plank owner on the Patterson as he was assigned to the vessel on 2 July 1884, in New York City. The ship began its voyage to the Pacific Ocean on 30 July 1884, and arrived in San Francisco on 13 February 1885. Highlights of the trip, according to seaman Thomas Ellingson, were a long layover in the Madeira Islands where the wine flowed freely and a stop in Rio de Janeiro where Pedro II, Emperor of Brazil, toured the ship. San Francisco was the ship’s home base for a number of years but its work was primarily in Southeast Alaska. The ship sailed for Alaska in late April and commenced its first hydrographic survey on 1 June 1885. This first season, Niblack was assigned topographic surveying duties and thus was afforded the opportunity to become familiar with the native American Haida and Tlingit Indians for whom the Pacific Northwest was home. During the 1886 field season, Niblack was in charge of triangulation and possibly was a pioneer in using steel wire for measuring a baseline as “Two baselines were measured by means of sounding wire led over tripods, stretched taut with large reels, and levelled with theodolites.” This marked Niblack as an original thinker and problem solver.

During field operations, the long distances between the ship’s working grounds in Alaska and sources of supply made it necessary to operate the Patterson in company with a tender. Initially the ship used a tender called the Lively, which was also used by the Coast and Geodetic Survey Steamer Hassler. Accordingly, arrangements were made for the construction of a steam launch which was ultimately christened the Cosmos. She was 52 feet in length, 12 feet in beam, and 8 feet in draft. On 4 May 1887, the Patterson departed San Francisco for its working grounds with the brand new Cosmos in tow. Ensign Niblack was in command of the Cosmos and had a small crew consisting of another officer, a seaman, a fireman, and a machinist mate. Three days later the hawser between the Patterson and the Cosmos broke during a storm off Cape Gregory (today known as Cape Arago), Oregon. Niblack wrote a detailed report concerning the experiences of the Cosmos over the next five days. Excerpts follow:
“…. When the chain span parted at 9:45 a.m. I rang the engine room bell for starting ahead. F.W. Lennox, fireman, in endeavouring to clear some obstruction in the forward crank unfortunately got his arm and hand caught by the descending crank and pinioned there. Had we been able to steam ahead immediately after the bell was rung, we no doubt would have been able to steam up to the ship even in the heavy sea and pick up the tow line again. As it was we fell off into the trough of the sea, lost sight of the ship in the thick mist, and all hands were busy trying to extricate the man’s arm…. As soon as we were able to go ahead we got over the sea anchor and rode to it. About fifteen minutes afterwards the chain parted and we again fell off into the trough of the sea. The high pilot house forward and the Whale’s back made it very difficult and expensive of steam power to keep the launch’s head up to sea. From dead reckoning I concluded that our distance from shore and from our nearest northern port made it imperative to save coal and water. (…) The wind increased in heavy squalls with rain, the worst squall shaking us about 4 p.m. The seas were as heavy as I have ever seen and I consider it both good luck and a good sea boat that carried us through. It moderated at 5 p.m. We spread fires and at 5:45 p.m. ran in shore. At 8:30 p.m. we made Cape Gregory Light and at 9:15 p.m. took departure and headed up the coast. We had then about 3 tons of coal and half our fresh water left. We arrived off the Columbia river bar at midnight Sunday 8th May. At daylight three pilot tugs came out and we spoke the ‘Pioneer.’ We were told that all vessels were bar bound inside and had been for three days; that the McArthur [a Coast and Geodetic Survey ship] was at Astoria waiting to get out; that the bar was getting safer all the time; and finally that one of the tugs was going back in soon and we might risk following her in. We were out of fresh water and using sea water in the boiler; had about a half ton of coal left; the weather was unsettled; and the condition of Lennox, the fireman, required medical assistance.”

Although a small vessel, the Cosmos showed itself to be a magnificent sea boat during this ordeal. Ensign Niblack showed himself to be a decisive and courageous captain in safely bringing his vessel to a safe haven. He also showed himself to be a good leader as he certainly gave credit where credit was due to enlisted and officer personnel alike. The Cosmos was resupplied with the help of the personnel of the McArthur and continued on to a rendezvous with the Patterson at Port Townsend, Washington, where it once again continued in company with that vessel to Southeast Alaska. If enough adventure had not already been the lot of Niblack and the Cosmos, while transiting to Port Townsend, it fell in with a fishing vessel that had rescued 25 men from the four-masted ship Ocean King that had foundered off Cape Arago, not many miles from where the Cosmos had weathered the storm. The 25 men were transferred to the Cosmos and transported to Port Townsend.

Of this episode, the commanding officer of the Patterson wrote: “It is impossible to speak in too high terms of the conduct of Ensigns A.P. Niblack and A.N. Beecher, and of the crew of the launch in successfully handling so small a steamer in one of the severest gales I have ever experienced. The machinist, Maurice Goulden, is an exceptionally competent man, and to his coolness, judgment and indomitable pluck… may be attributed the safety of the Cosmos….”

Niblack was one of the navy’s intellectuals as shown by the range of subject matter in his publications. Following detachment from the Patterson he completed the classic ethnographic work the coast Indians of southern Alaska and northern British Columbia in 1890. This work was based on copious field notes and photographs that he took while attached to the Coast and Geodetic Survey. The following year he wrote the winning prize essay of the U.S. Naval Institute on The Enlistment, Training and Organization of Crews for Our Ships of War. He wrote the winning essay again in 1896 with a paper on The Tactics of Ships in the Line of Battle, and then in 1906 received first honourable mention with The Elements of Fleet Tactics. However, it was not until 1904 that he received another command, being the 702-ton fleet tug Irocquois. Things proceeded rapidly from this time on though as he went on to command the USS Hartford, a training and cruise ship for midshipmen; the cruiser USS Olympia also as a training ship; and then during World War I as commander of Division I, Atlantic Fleet, with the battleship Alabama as his flagship. Following the war he served as chief of Naval Intelligence; commander of U.S. naval forces in European waters; and then a final assignment as commander of the 6th Naval District based out of Charleston, South Carolina. He retired from this post in 1923 as a Vice Admiral and the following year was elected a director of the International Hydrographic Bureau (IHB) in Monaco and its president in 1927. He published a number of documents between 1924 and his death in 1929. Among them were IHB Special Publication 19: Ocean currents in relation to oceanography, marine biology, meteorology and hydrography, a discussion of bathymetric terminology, and various papers on chart production methodology.

Vice Admiral Niblack outlived his first command by two years. The Cosmos had an illustrious career of its own helping survey the waters of Southeast Alaska for forty years before being condemned and sold in 1927. Two generations of hydrographers had worked upon her decks while surveying the little-known waters of Alaska. The little vessel, with Niblack at its helm, survived its first harrowing trip. One wonders if the Admiral was aware of the little vessel’s final disposition and gave a final salute and a hearty ‘Well done!’

Today, Southeast Alaska is graced with several names commemorating both Niblack and the Cosmos. There is Niblack Anchorage, Niblack Islands, Niblack Point, and Niblack Hollow. Interestingly, there is a proposed Niblack Mine near Niblack Anchorage which may necessitate further hydrographic work to assure safe passage for marine transport of the mined ore. Echoes of the Cosmos remain at Point Cosmos, Cosmos Cove, Cosmos Pass, Cosmos Peak, Cosmos Point, and the Cosmos Range of mountains.