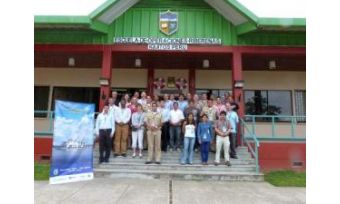 Over 45 people attended the workshop including representatives from hydrographic offices, inland waterway transportation agencies and companies who conduct inland/river hydrographic surveys. Attendees included people from Hydrographic Offices of Brazil, Ecuador and Peru, and representatives from commercial companies in Canada, Peru and the United States. There were also observers from the Inland ENC Harmonization Group (IEHG) which met in Iquitos later that week.

The workshop included a series of seminars and on-water demonstrations aimed at increasing the level of knowledge on the hydro-dynamic processes that influence dynamic changes in South American river systems. Presentations by Dr Jorge Abad (University of Pittsburgh, Pennsylvania, USA) explained how parameters such as volume and velocity of water flow, sediment transport, and river bed composition/morphology are the primary factors. He also provided examples of complex river meander shapes and fluctuations that occur in Peru and Brazil. Another series of presentations by Mr Kevin Oberg (US Geological Survey) provided both a theoretical background and practical advice on the use of Acoustic Doppler Current Profilers (ADCPs).

This workshop had several take-home messages related to conducting fluvial hydrographic surveys. In addition to using satellite images to monitor changes in river configuration, there is also a need to rely on field observations, experimental measurements, and numerical modelling in order to better predict changes in river configuration that continually occur. When conducting fluvial hydro surveys, various types of equipment and procedures are required that are not often used when conducting hydrographic surveys in ocean and coastal regions. In this regard, it was recommended that there may be a need to review existing IHO standards on hydrographic surveying in terms of their application and adequacy for conducting hydrographic surveys in dynamic, river systems. In particular, this includes IHO Standards for Hydrographic Surveys (S-44) and the Manual on Hydrography (C-13).