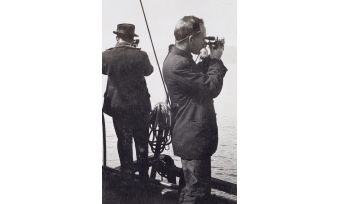 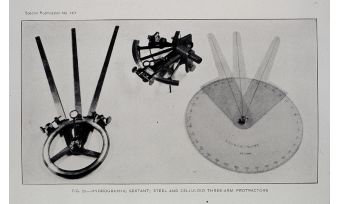 Prior to the development of modern navigation methods and modern charts, the mariner was left to his own devices both in approaching unknown and known coasts. Although Lucas Janszoon Waghenaer invented the nautical chart in the late sixteenth century, his charts and the charts produced over the next two centuries were relatively crude affairs made with primitive methods. Accurate methods of positioning a vessel and confidently determining longitude were virtually unknown until the late eighteenth century. What could be called modern nautical charting methods were also not developed until that time.

Early navigators relied as much on faith, instinct and luck as solid hydrographic knowledge. Examples of this can be found in early maritime literature. An account by Master Jackman on Sir Martin Frobisher’s return voyage to England in 1578 described using an armed lead (a sounding plummet having a recessed socket filled with wax or tallow to pick up bottom samples) to determine bottom characteristics. He “sounded and had 70 faddems, oosy sand, whereby we judged us to be northwards of Scilly, and afterwards sailed south-east all that night”. The ship rounded Lands End safely, and in three days “had sight of the Start, 5 leags off, God be praysed!” Few mariners today would trust their lives to “oosy sand.”

During this time, many pilot guides were being published such as William Bourne’s, who wrote in 1574 “Also it behoueth him to be a good coaster, that is to say, to knowe every place by the sight thereof”. Rutters also included information (sometimes ad nauseam) on the character of the bottom. A typical passage in the earliest English sailing directions refer to “sandy wose and black fishey stonys .... redd sande and black stonys and white shellis .... grete stremy grounde with white shellis ... the grounde is redd sonde and white shellis amonge .... the grounde is white sonde and white shellis”. That there were fine arguments as to which white “shellis” were which is corroborated by an account of the Ship Hopewell from Newfoundland bound for London in August 1587 “drawing neere the coast of England” sounded and found seventy fathom, but nobody could agree on interpreting what the lead brought up; so through “evil marinership were fain to dance the hay foure days together’ running northeast, southeast, east, and east northeast” until finally sighting a known point on land. (To dance the hay refers to a folk dance in which the participants moved in circles).

Although in deep water there were fewer opportunities for disaster as compared to sailing in close proximity to land, the problem of longitude determination bedevilled the deep-sea sailor. On 2 June 1699, William Dampier described his uncertainty while approaching the Cape of Good Hope: “I saw a large black Fowl, with a whitish flat Bill, fly by us; and took great Notice of it, because in the East India Waggoner, or Pilot-Book, there is mention made of large Fowls, as big as Ravens, with white flat Bills and black Feathers, that fly not above 30 Leagues from the Cape … My Reckoning made me then think myself above 90 Leagues from the Cape, according to the Longitude which the Cape hath in the common Sea-Chart: So that I was in some doubt, whether these were the right Fowls spoken of in the Waggoner or whether those Fowls might fly further off Shore than is there mentioned… I found, soon after, that I was not then above 25 or 30 leagues at most from the Cape….”

Although reduced to navigating by fowl, Dampier, showing complete understanding of the navigational problems of his day, went on: “Whether the fault were in the Charts laying down the Cape too much to the East …, or were rather in our Reckoning, I could not tell: But our Reckonings are liable to such Uncertainties from Steerage, Log, Currents, Half-Minute Glasses, and sometimes want of Care, as in so long a Run often cause a difference of many leagues in the whole Account.”

Over the next century, a revolution occurred in both the ability of the mariner to position himself at sea and in the techniques for producing accurate nautical charts for use in approaching land and harbours. The convergence of three factors led directly to success in determining longitude: 1) invention of the octant by John Hadley in 1731 and then sextant by Captain John Campbell RN in 1757; 2) the invention of the chronometer, generally attributed to John Harrison, although there were a number of forerunners of this technology; and 3) development of the lunar distance method of longitude determination coupled with the publication of The British Mariner’s Guide in 1763. This guide, produced by Nevil Maskelyne who became the fifth British Astronomer Royal in 1765, led to the publication, beginning in 1767, of yearly nautical almanacks with predictions of the positions of various astronomical bodies expressly for the purpose of determining longitude at sea.

Paralleling the evolution of technologies and methods for longitude determination, was the development of improved systems and methods for surveying the coastlines of the world. A pioneer in this endeavour was Murdoch Mackenzie. In 1747, he began a survey of the Orkney Islands. Of this survey and its published charts, he wrote: “Having previously acquired a competent knowledge of the islands, and planned the future procedure in my mind, I caused beacons, or landmarks, to be built on the summits of all the remarkable hills and eminences; and, catching the opportunity of a very hard frost I pitched on the north-most branch of the Loch of Stenhouse…” for measurement of a 3 and ¾ mile baseline. Mackenzie goes on: “The direction of this baseline having been exactly taken with a magnetic needle, from each of its extremities, with a good theodolite, the angles were observed, contained between the base and the visual rays connecting the beacons; from which their distances from the station and from one another, were calculated trigonometrically and protracted on paper in their proper bearings…”

The purpose of the survey of terrestrial points prior to conducting the hydrographic survey was to establish a geographic framework in which the accurate location of soundings could be determined by either intersecting bearings or by three-point sextant fix. The accuracy of MacKenzie’s surveys were degraded by using intersecting bearings observed by magnetic compass during his hydrographic surveys.

MacKenzie was aware of the concept of the three-point sextant fix but no instrument was available to plot the resulting fix. This led him to publish a suggestion for design of a station pointer (also called a three-arm protractor) in 1774. This instrument was meant to easily and rapidly plot three-point horizontal sextant fixes.

Although the history of the production of this instrument is murky, it seems that the surveyor Graeme Spence developed and used the first station pointer by 1784. The benefits of this new technology and methodology were immediately apparent in both the increased accuracy of plotted soundings and the ability to maintain straight, well-controlled survey lines. The station pointer also facilitated rapid plotting of ship and sounding boat positions while outlining shoals or running shoreline. In spite of these advantages, the slow dispersion of information through the ranks of marine surveyors is highlighted by the fact that Captain Thomas Hurd, while visiting the British Hydrographic Office in 1806, saw a station pointer for the first time and ordered one for his own use.

Hydrographer of the British Navy

Two years later, he was appointed Hydrographer of the British Navy. He was progressive in his views and within ten years the British East India Company hydrographer James Horsburgh stated that the station pointer was a common piece of surveying equipment. And so it and the technique of measuring horizontal sextant angles for a three-point fix remained so for over 150 years. The accuracy of positioning by this technique (3-5 metres in a rigid geodetic framework) was not exceeded in normal surveying practice until the advent of the global positioning system.

Besides leading the hydrographers of the world into the modern era, Murdoch MacKenzie left a legacy of moral guidance to those who survey the seas: “The lives and fortunes of sea-faring persons, in a great measure, depend on the accuracy of their charts. Whoever, therefore, publishes any draughts of the sea-coast is bound in conscience, to give a faithful account of the manner and grounds of the performance, impartially pointing out what parts are perfect, what are defective, and in what respects each is so; that the public may be enabled to judge … how far the draughts are to be relied on.”