Geomares Publishing is the new media company behind Hydro international, which in October took over ownership from the magazine’s previous publisher of almost ten years, Reed Business Geo. Publishing director of Geomares Durk Haarsma has strong in-house brands, dynamic publishing concepts for the future and a dedicated team who will keep working to deliver quality in every possible way.

Could you outline your reasons for buying Hydro international and establishing Geomares Publishing?

I have been in post as publisher of Hydro international now for five years and have a strong belief in Hydro international as a flagship brand. Together with our other publication, GIM International, it makes a super combination as portfolio. Both publications encompass fields that are set to grow continually in importance. Geo-information is becoming the basis for so many other industries; investment in research and development is still running high and new products being introduced, even in these harsh economic times. So when Reed Business signalled they wanted to sell the magazines, Meine van der Bijl, already financial controller in Lemmer (the Netherlands) for ten years, and I decided to step up to the challenge. We are looking forward to the work, because we simply believe in the industry and its growing importance. Besides, on a personal note, I have already made a lot of friends in the business. I kind of like the idealistic touch I see and recognise in a lot of professionals throughout our businesses. I'm more than pleased to be a part of that. This is such a fun industry to work in.

You are such a small company in comparison with the former owner, Reed Business, which employs thousands of people. How do you feel about this?

You're right. We have ten people in our office, including editorial, sales and marketing departments. It's fine. The future lies in small media companies - as long as they combine vision regarding what to offer their readership through different channels with keeping in touch with readers. As long as they know what is going on within the media landscape, and are able to make the right connections. In a way, not much is really changing; we've always worked from our office as quite an independent satellite. We continue to occupy the same office space in Lemmer, but without any lines to an external headquarters. Big companies are all too often focused on big profits, and the overheads are immense. In a small company, lines of communication are short, both internally and to the outside world. We are flexible and able to anticipate market queries and needs; for instance, in the way readers would like to consume professional information.

What is the role of your team members in this?

We are immensely proud of our team. They have been working hard on all the extra tasks that have arisen in the first months of the transition without losing focus on their daily work: editorial, marketing and sales and database entry. Most members of the team have been working with Hydro international for years, and will all keep doing so. They are knowledgeable about the market and they interact with readers, authors and advertisers; this makes the team one of the strongest assets of Geomares Publishing. It gives us pleasure to introduce them to you in this issue of Hydro international - some faces are probably familiar to a lot of you, others colleagues are more behind the scenes (see boxes on these pages). Our thanks are also due to the large network of external freelancers, contributing editors, the editorial board and editorial advisory board, authors, regional correspondents and others who give a great deal of effort and energy, not to say their almost always sparse time, to Hydro international. We couldn't function without them!

Hydro international has been around for more than ten years. Does it stand out and, if so, in what way?

Hydro international has indeed been around for a long time. That's an accomplishment in itself, with all credit due to everyone who worked on the magazine in the past. Does it stand out? Yes, I think it does. I think there are three reasons Hydro international is still around. First of all, our quality content. We certainly do not publish everything that is offered. Authors will experience a long process before an article is published. The editor-in-chief and author e-mail back and forth, often several times, to ensure the article meets our required standards. It's not that easy to get an article published, and therefore it's a compliment to achieve a place in the magazine. Secondly, I think we are truly the one and only globally distributed magazine for hydrography. Our readers are to be found in more than 180 countries, in all corners of the world, with a clear balance between the continents: one third of our readership is located in the Americas, a third in Europe, Africa and the Middle East, and another third in the Asia Pacific region. Last but not least, we're a BPA-qualified magazine. This means that all our readers have to be certified as workers in the field of surveying, GIS, geo-IT, mapping and charting, navigation or remote sensing. Being audited by BPA means a certified readership. It says you are really among peers!

What is your underlying reason for certifying your readership through BPA?

As said, it sends out a clear message to readers that they're among peers. It also means that we need to deliver quality content, because our readers are smart enough to see through sloppy stories written from a propaganda perspective. In a way, it keeps us sharp. On the other hand, there's no better way to show many of our advertisers that their message is being distributed amongst hydrographic professionals with buying power - just the group they want to target!

What do you see as the future in your branch of publishing?

Professionals need to have their information available at all times; therefore the role played online might grow bigger and bigger. A lot of readers are online for work on a daily basis. During the evening they chat with friends, buy books on Amazon or look up things on Google. It would be strange to assume that they won't look for professional information on the web. Via our website (81) we try to serve our audience with information as fast as possible. But in this context I, as publishing director, have to stress my belief in the future of the print magazine, which will still be important to our readers, informing them through longer background pieces that are somewhat less timely than news.

Are there any changes on the horizon for Hydro international?

Hydro international will be a platform that informs readers through all possible channels alike: website, newsletters and the print magazine. We will try and diversify, or rather tailor information to the wishes of subgroups of geomatics professionals. As we have already mentioned, the importance of geo-information is growing and there's still a lot of uncharted territory, both literally and metaphorically speaking. Also, applications and solutions are branching out into different fields. Think electronic charting for instance. We will be developing new services that help enhance the professional performance of our readers. Be assured, Hydro international will be in the forefront of getting information to you, and present at the centre of the market to hear what you do and do not want from us. In fact, let's start immediately. We would like to invite you all to go to our website and leave your thoughts, remarks and suggestions for myself and our entire team to chew on. We'll send a bottle of good wine for any idea that we carry through into the future.

Durk Haarsma (38) is publishing director of Geomares Publishing. For almost five years before Geomares came into existence through a management buy-out on 1st October this year, he published magazines including GIM International and Hydro international on behalf of Reed Business Geo. Prior to this he worked for almost ten years as an editor and journalist for various management magazines, and also as a radio reporter on a daily news programme.

Meine van der Bijl (47) is financial director of Geomares Publishing. Prior to the management buy-out he was employed as financial controller with responsibility for GIM International and Hydro international at Reed Business Geo since 1999. Before joining Reed Business Geo he worked in the accounting control departments of several companies.
meine.van.der.bijl@geomares.nl

Roosmarijn Haring is editor-in-chief of both Hydro international an GIM International. Having graduated in Physical Geography from the University of Amsterdam, she began editing geographically orientated publications in 2000, and in 2008 took on her current challenging task, spearheading Hydro and GIM through this latest phase in their development. Her career began at the Dutch Ministry for Transport, Public Works and Water Management, after which she worked as researcher with Alterra and subsequently as conservationist with the Dutch Society for Dune Conservation and the Wadden Sea Society.
roosmarijn.haring@geomares.nl

Marjan de Vries joined the company as circulation manager/readers' marketer in 2004. When the job of account manager for Hydro international became vacant, she gladly rose to the challenge. She spends a great deal of her time travelling to the UK, USA, Canada and northern Europe to visit exhibitions and companies in the field of hydrography. Both in the office and abroad, she is constantly available to companies seeking more information regarding advertising in the Hydro international magazine, on the website or in the newsletter.
marjan.de.vries@geomares.nl

Boukje Vreman, her ambition always having been to work in publishing, started her career at Reed Business Geo as editorial manager of GIM International in 2008, co-ordinating magazine input and editing content for the website and newsletter. She soon took over the same activities on behalf of Hydro international, devoting all her attention to editing and guiding both magazines throughout their production process.
boukje.vreman@geomares.nl

Joost Boers started working for Hydro international in the position of editorial manager. In view of his previous experience and interest in online developments, he pioneered a new position as content manager in 2008. He is responsible for the online success of the Hydro international and GIM International websites and newsletters and the further development of Geomares' online publishing activities will also be in his hands. He also
co-ordinates production of our valued Product Surveys.
joost.boers@geomares.nl

Trea Fledderus has been working for GIM International since 1997, first as editorial assistant, and later also responsible for the first years of the magazine's BPA certification. Over the years she became marketing assistant, responsible for all GIM International co-operation in conferences and exhibitions, and a range of other marketing activities including readers' marketing.
trea.fledderus@geomares.nl

Aliëtte Miedema graduated in Communications, and began work as editorial manager for GIM International in 2003. After five years she decided it was time for a change, and pioneered the position of marketing co-ordinator, responsible for planning and co-ordinating company marketing communications, including sales marketing, readers' marketing, e-marketing, privacy compliance, and product introductions. Being a creative person, she likes developing communications material such as brochures, advertisements and banners.
aliette.miedema@geomares.nl

Petra Hoekstra joined our company in 2006 as circulation manager, and is responsible for subscription administration and ensuring the magazine reaches subscribers at the right address. She thus provides Hydro international with its BPA Worldwide qualification, an important assurance for companies advertising with us. At exhibitions as well as in the office she is also a great hostess, and we love her homemade cakes!
petra.hoekstra@geomares.nl

Victor van Essen, account manager for GIM International, is the contact person for companies interested in advertising in the magazine, website or newsletters. For more than six years he has travelled on behalf of the magazine, visiting conferences, exhibitions and companies worldwide. At the office he busies himself handling questions and searching for companies newly entering the international geomatics market.
victor.van.essen@geomares.nl 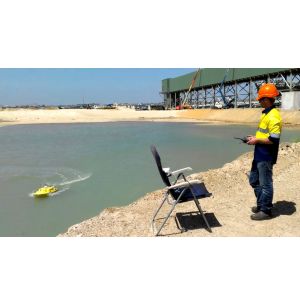