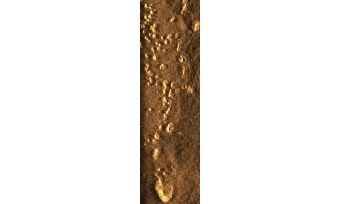 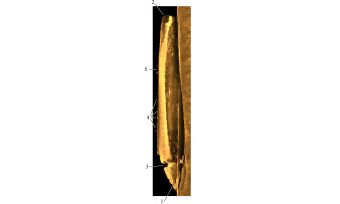 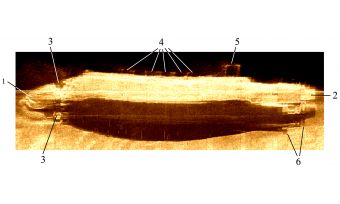 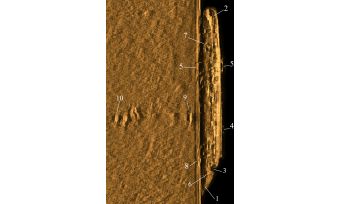 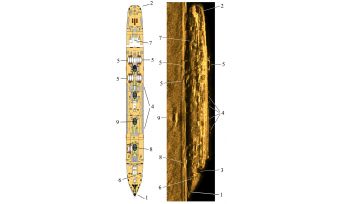 During a habitat mapping project at the Cyclades Islands (southern Aegean Sea - eastern Mediterranean Sea) which focused on the mapping of coralline algae, the shipwreck of HMHS Britannic was acquired. This article presents the initial results of the habitat mapping and the findings of the high-resolution side-scan sonar survey of the forgotten sister of theTitanic.

In September 2007, the Laboratory of Marine Geology and Physical Oceanography (MGPOL) and the Marine Biology Research Group of the Department of Geology and Biology of the University of Patras jointly carried out a marine biological survey in the reported vicinity of the wreck location. The aim of that survey was the mapping of coralline algae in the Cyclades Islands and the study of coralline algae formation morphology, distribution, ­development conditions and relation to fisheries, using a combination of remote sensing and ground-truthing techniques. Coralline algae are one of the most important constructors of biogenic habitats. In the Mediterranean Sea, the dominant coralline algae species form crusts comprising formations known as coraligène , considered a very important fishing ground by fishermen.

The survey was conducted on board the R/V FILIA (HCMR) using: (i) a dual frequency (100–500 kHz) EG&G Model 272-TD side-scan sonar towfish in association with the digital recording unit EDGETECH 4100; (ii) a 3.5 kHz (Geopulse) sub-bottom profiling system; and (iii) a MKII Benthos ROV. Positional data was provided by a GPS with an accuracy of ±5–10m.

The coraligène formations were recorded on side-scan sonar sonographs as distinct echotypes of localised backscatter facies (Figure 1). Coralline algae usually have a thallus of hard material and so when acquired from the side-scan sonar appear very similar to hard rock bodies outcropping on the seafloor. The discrimination of the coralline algae formations from the rock outcrops was managed by a high-resolution sub-bottom profiling system which was operating simultaneously with side-scan sonar. Additionally, two ground-truthing techniques were used to verify acoustic interpretation of the remote sensing data: sediment sampling techniques and observational techniques. Several dives were made using a light-work class ROV (Figure 2). Sonographs showed that the coralline algae form minute reef aggregations (Figure 1). The individual reefs were circular to elliptical in plan view with diameters or major axes in the range of 5–10m (Figure 1). The sub-bottom profiles revealed that the coralline algae are developed on both hard and soft (sandy) substrate having a height of about 0.5–2.5m.

HMHS Britannic sank on her sixth voyage while serving as a hospital ship off the Greek island of Kea in the Aegean Sea, on 21 November 1916. The Britannic was the third and largest Olympic-class ocean liner of the White Star Line, a sister ship of the RMS Olympic and RMS Titanic and remains the largest sunken ocean liner in the world. The wreck was first found and explored by J.-Y. Cousteau in December 1975 and was relocated and surveyed in detail by Dr Robert Ballard in 1996. During the last ten years, two more expeditions were carried out trying to determine what caused the fast sinking of the Britannic . Almost 90 years after the liner disaster, a side-scan sonar survey has obtained high-resolution sonographs of the legendary shipwreck.

The background and her short life

The Britannic was launched on 26 February 1914 at the Harland and Wolff Inc. shipyard in Belfast. The outbreak of World War I cancelled the complete finishing as an ocean passenger liner since all shipyards with Admiralty contracts gave priority to military requirements. Since the main objectives of the Gallipoli Campaign (the British and French attack on the Dardanelles, North Aegean Sea) had been abandoned and as the casualties mounted, the British Admiralty decided to use modified passenger liners – one of them being the Britannic – as hospital ships for the treatment and the evacuation of wounded soldiers.

On 23 December 1915, the Britannic was ready for her maiden voyage. She left Liverpool bound for Naples, Italy, and the port of Mourdos on the Greek island of Lemnos. Lemnos island had been chosen as a base for the Gallipoli Campaign and then as a spot for hospital ships to pick up wounded soldiers.

The Britannic started her sixth voyage on 12 November 1916. By the morning of Tuesday 21 November she was sailing at full speed (21 knots) in the Kea Narrows, between Cape Sounio (a peninsula which includes Athens) and the island of Kea. At 08:12 a loud explosion shook the ship. The explosion had taken place on the starboard side between holds two and three and was probably caused by a mine. It was about 09:07, only fifty-five minutes after the explosion, that the “most wonderful and largest hospital ship that ever sailed the seas” became a part of the rich heritage of the Aegean Sea. At the scene of the disaster, 35 lifeboats with 1036 survivors on board were scattered on the sea. Only thirty souls were lost.

The side-scan sonar survey of the Britannic, with dual frequency (100–500kHz) EG&G Model 272-TD side-scan sonar towfish (EDGETECH 4100 digital recording unit), was organised into two phases. During the first phase, a systematic side-scan sonar survey of the seafloor at the reported vicinity of the wreck location was carried out. This survey was conducted at an operating frequency of 100kHz and a wide swath of 400m per channel in order to survey a broad area of the wreck location. The lane spacing (600m) was such that the seafloor area covered by the two lines overlapped by 50%. The sonar towfish was towed over the seabed at a height of about 80m. A mosaic of the data was subsequently created using the Triton Elics (ISIS and DELPHMAP) software.

The second phase of the survey was dependent upon on the results of the first phase. Once the wreck of Britannic was successfully relocated, the operating frequency was set to 500kHz with an associated swath width of 100m per channel in order to achieve the highest resolution shipwreck imagery possible. The identification of the wreck was based on unique characteristics of the Britannic on side-scan sonographs resulting from her length (269m), shape and distinctive features such as masts, damage in the bow and life boat davits. During the second phase, the survey vessel moved along tracklines parallel to the bow–stern direction of the wreck to obtain side-scan sonar images of the deck and the keel of the Britannic.

Due to the digital collection of the sonar data, XTF (eXtended Triton Format) files were stored in optical storage units. XTF format provides the ability to georeference the collected sonographs, since acoustic data is stored along with ping-by-ping positioning data. Post-processing of the sonographs includes speed correction, time-varying gain (TVG), water column removal and noise filtering. No slant-range correction was applied to the side-scan data during survey. An area of approximately 2.5km2 was surveyed, centred on the site of the Britannic, and a total of 5.5km of digital side-scan data were acquired.

Side-scan sonar imagery from the wreck indicates that the Britannic rests on her starboard side. The resulting sonographs seem to confirm that the wreck lies on a heading of 253° and on her side at an approximate angle of 85°. The tip of the bow sits slightly more upright than the other part of the hull of the ship. This is due to the fact that once theBritannic’s bow had touched the seabed, it would have been impossible to pivot due to the bulk of the hull itself. Taking into account the weakening of the bow by the explosion, it had almost wrenched itself free when it touched the seabed. The first 40m of the bow, which bore the brunt of the collision on hitting the bottom, are heavily twisted and contorted (Figure 3). However, sonographs show that the hull still remains in one piece.

The 253° heading of the wreck seems to indicate that during the last half hour, the ship sailed in the opposite direction from which it was approaching prior to the explosion. The course of the ship during the sinking may have been affected by two factors: (i) the list to starboard which initiated a wide turn to the right; and (ii) the intensity of the currents in the area with prevailing currents flowing south-southwest. Sonographs show that the original superstructure of the ship, including deckhouses, mast, cargo cranes, giant lifeboat davits and Wellin type davits, remains in remarkably good condition.
The only exceptions are the funnels, since none of the four smokestacks are in position. According to George Perman, who was 15 years old when working as a lift operator on the ship, the funnels became detached from the ship in the same order as they touched the water. However, sonographs do not confirm the eyewitness’s description. The first funnel lies only a few metres from its original position just aft of the bridge of the ship, suggesting that it probably fell off only on impact. The poop deck and the stern of the ship are almost perfectly preserved with the giant propellers still in place. There is only a few debris around the main wreck as the Britannic sank intact in shallow waters. The other three funnels were detected away from the wreck, the nearest (probably the second funnel) is about 50m away and the farthest is roughly 180m away. Sonographs show that the funnels retain some of their original elliptical-cylindrical shape although they have been flattened.

George Papatheodorou is currently an assistant professor of marine geology at the University of Patras, Greece. His research interests are gravitative mass movements, gas in marine sediments, marine pollution and archaeological oceanography.

Elias Fakiris is currently a Ph.D. candidate in marine geology with experience in ocean acoustics and signal and image processing.

Maria Geraga is currently a lecturer at the University of Patras and her research interests are palaeoclimate and archaeological oceanography.

George Ferentinos is professor of marine geology at the University of Patras with experience in coastal shelf and slope processes, sediment transport under currents and waves and gravitative mass movement processes.

Constantine Koutsikopoulos is currently an associate professor of marine biology at the University of Patras and he is mainly involved in fishery studies covering the exploitation aspects and also the fishery – environment interactions.