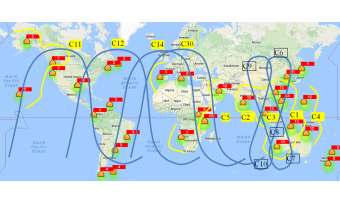 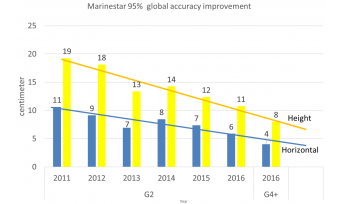 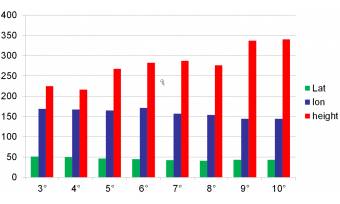 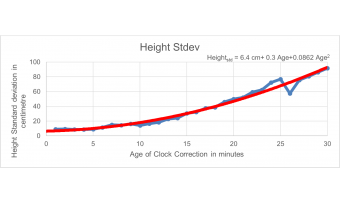 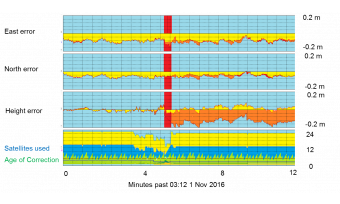 Currently, there are four global navigation satellite systems (GNSS) available: GPS, Glonass, Beidou and Galileo. These satellites can be used directly, but accuracy is greatly improved when using orbit, clock and UPD correction signals. Fugro Satellite Positioning operates a worldwide network of more than 100 GNSS reference stations capable of tracking the GNSS. This network is used to calculate precise satellite orbit and clock corrections for all four constellations in real-time for hydrographic applications. The corrections are broadcast to the maritime users by geostationary L-band satellites providing worldwide coverage. This article describes recent developments and the resulting accuracy of specifically the precise point positioning (PPP) real-time kinematic (RTK) solutions.

The Fugro Marinestar G4 service uses all four GNSS satellite constellations. The two regional systems (QZSS and IRNSS) are not used. However, not all four global constellations have the same geographical spread or the same number of available satellites. Therefore, one must consider the strength and weaknesses of each constellation. The current status for each GNSS, based upon a minimum elevation of 5°, is given below.

In September 2016, there were 31 healthy American GPS satellites with one satellite (SVN 34/PRN 04) acting as a spare. In the current constellation, 19 so-called block IIF satellites transmit the newest, 3dB stronger, additional L2C signal. This allows for better tracking in marginal circumstances and no impact when the L1 signal is jammed (in contrast with the legacy L2 signal which will be affected).

According to the Marinestar GNSS network data, there are between 6 and 13 GPS satellites useable on a daily basis. Local blockage and interference can reduce this to less than 4 satellites, which is not sufficient for a PPP-RTK position calculation. On a typical day, three sites were affected by short local GPS interference.

The Chinese BeiDou navigation system currently has a constellation of 14 operational satellites consisting of 5 Geosynchronous satellites (GSO) on the equator covering China, 5 Inclined Geostationary Satellites (IGSO) and 4 Medium Earth Orbit (MEO) satellites, which rotate the earth 13 times in one week. Within the Chinese Beidou Conus between 6 and 14 satellites are always visible. The MEO’s limit availability in the America’s is between 0 and 3 satellites. In Patagonia, the Beidou IGSO satellites are visible over the South Pole increasing the number to 4 (See Figure 1).

Based on the overview it is clear that no single constellation allows consistent positioning for all current reference stations. The total number of nominally available satellites is 70 (32 GPS, 24 Glonass, 14 BeiDou). When all constellations have been established in 2020, there will be 116 satellites (32 GPS +24 Glonass +30 Beidou+30 Galileo). Marinestar G4+ uses measurements from all four constellations (hence G4) and currently broadcasts the orbit and clock corrections for GPS, Glonass and Beidou. Broadcast of Galileo orbit and clock corrections is technically possible, but waits for the declaration of Galileo early service capability by the EU. Additionally, G4+ fixes additionally the ambiguities on GPS (hence +) to allow for PPP-RTK positioning (See [2] Tegedor).

Marinestar provides a Precise Point Positioning service using GNSS data of a globally distributed network of around 45 reference stations. Using these stations the precise orbit of the GNSS satellites are determined and transmitted to the user every minute. The satellite clock error is also measured and transmitted every ten seconds.

Over the years, the accuracy of the orbit and clock solution has improved. For the G2 Glonass / GPS solution from 11 to 6cm horizontally and from 19 to 11cm vertically (see Figure 2). The slight increase in 2014 and subsequent decrease in 2015 is due to scintillations during the solar maximum in 2014 and an improved algorithm in 2015.

With the newer satellites with more signal power, better antenna gain designs and better receiver tracking, the minimum elevation can be reduced as well allowing for resolving blockage of large parts of the sky due to scintillation. This has been tested using data from Macae, Brazil during the scintillation in December 2015 (Figure 3).

Due to improved rubidium clocks in 19 GPS IIF satellites, it is now possible to extend the age of the clock corrections from 5-10 minutes and still obtain good results although the position degrades slowly as the age increases (see Figure 4a and 4b) for an example from Karratha in NW Australia for the G2 service).

Over time, older GNSS satellite clocks can become noisier. Typically, these satellites are within the specifications for general use, but for high-end PPP-RTK services such as G4+ they are a challenge as the variations between correction epochs can be up to 10cm. This clock jitter needs to be removed which is done within Marinestar.

Having multiple constellations provides a benefit. Having more measurements is crucial during heavy scintillation in the equatorial region as seen in Africa and Brazil in 2013-2015. For GPS positioning alone, more measurements are crucial because due to unhealthy satellites there are not always sufficient GPS Satellites available (See [6] NANU’s). Adding GLONASS measurements resolves that problem.

Adding Beidou to the PPP solution improves availability although the Beidou Geo and IGSO orbit accuracy is limited due to the larger distance to the earth. However, the satellites are very helpful in fixing short-term one-minute data gaps due to e.g. local interference or in cases of GPS L1 jammer interference where the GPS L1 frequency of 1572MHz is blocked, but the BeiDou B1 frequency of 1561MHz survives (figure 5). In case of Iridium/Globalstar interference from >1612MHz, the Beidou B1 frequency is still tracked while Glonass and to a lesser extend GPS L1 signals can be disturbed.

The accuracy of PPP can be further improved if the complete carrier-phase wavelengths can be resolved as is done by standard RTK. Marinestar offers the G4+ service based on PPP-RTK with fixed GPS integer ambiguities using so-called Uncalibrated Phase Delays  (UPDs) generated within the Marinestar network.

Applying precise Orbit and Clock corrections in the network of reference stations with inter distances of 1000-2000km, it is possible to estimate the UPDs precisely for the GPS L1 observations and the wide-lane observations for every satellite in real-time.

The UPD corrections are broadcast over the satellite links to the G4+ users. In the user’s receiver, the integer numbers of GPS ambiguities (complete wavelengths of L1 and L2 signals) are estimated using the Lambda Method (See [3] Teunissen). The fixed GPS ambiguities are used in the solution model to re-calculate more precisely the final position (G4+) solution using GPS, Glonass, BeiDou and Galileo observations.

The quality of the Marinestar position services is continuously improving. Overall and due to the reduced ionospheric disturbances after the solar maximum, GNSS positioning results will be better until the rise of the next solar maximum in 2023.

The typical accuracy of G4+ solution is better than 4cm in horizontal and 8cm in height. The horizontal improvement of a G4+ PPP-RTK over a PPP G2 solution is between 6% and 27% horizontally and between 2% and 8% vertically. The improvement in height is limited by tropospheric effects lumping in the height component. However, positioning by PPP-RTK techniques requires more attention to the receiver-antenna setup and environment of the surveyor.