Government and Private Surveying Working Together - 03/04/2015 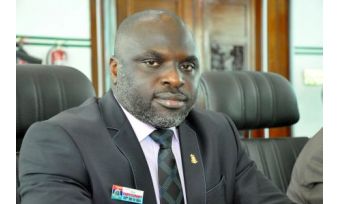 Nigeria is a country that plays an important role for the African continent, even though this is not at all times apparent. It has quite a lot of offshore activity and its ports handled 22,324,223 million metric tonnes of cargo in the first nine months of 2014. Improving the waterways is one of the goals the management has set itself. Add to this all the inland waterways that have an economic significance as well. This makes it interesting to talk to Captain Nuhu Jidere Bala, Hydrographer of Nigeria.

As the lead agency for hydrography in Nigeria, the Nigerian Navy Hydrographic Office works with other related agencies and maritime stakeholders to develop a prioritised hydrographic survey programme for Nigeria. An analysis and assessment methodology has been developed to assess the adequacy of hydrographic surveying and nautical charting coverage. Indications of chart adequacy and completeness as depicted on current charts covering Nigerian waters are spatially correlated with vessel traffic data and significant maritime sites/areas associated with social, environmental and economic factors to prioritise the Nigerian waters for survey. Based on the survey priority assessment, critical navigation areas would be surveyed first before moving on to less navigation significant areas.

The establishment of the IHO is a great achievement for mankind. The work of the IHO in developing hydrographic and nautical charting standards has greatly helped in making the maritime environment a safe area. Nigeria has greatly benefited from being a member of the organization, especially in the area of capacity building. The formation of Regional Hydrographic Commissions has acted as a forum for addressing common regional hydrographic matters and has served as a closer avenue for engaging governments on the need for adequately surveyed sea areas. The Eastern Atlantic Hydrographic Commission in particular has made tremendous progress in this regard. Consequently, more countries in the region have either indicated interest to join the organisation or have started the process of collecting and disseminating maritime safety information.

At the last extraordinary hydrographic conference (in October 2014), Nigeria was represented by Navy Captain Daniel Atakpa and  Mr. Okey Onowu, hydrographic surveyor of the Nigerian Maritime Administration and Safety Agency (NIMASA). Can you explain how the Navy and NIMASA cooperate in the tasks of surveying and charting?

Navy Captain Daniel Atakpa and Mr. Okey Onowu were part of the Nigerian contingent at the conference. I should have led the Nigerian contingent to the conference, but due to administrative problems in processing the visa, I asked Captain Atakpa to represent me. Nonetheless, the Nigerian Navy and the NIMASA have a memorandum of understanding, where the Navy provides certain key staff members to the NIMASA hydrographic department. This includes the head of NIMASA hydrographic department. Also, the 2 agencies collaborate in joint surveys and other capacity building programmes.

Moreover, I would like to remind you that in an interview in 2002, Commodore Joseph Abulu, your predecessor, warned about the fact that the absence of new surveys will continue to push up the cost of cargo freight. Has the Nigerian Government been doing anything to remedy this situation?

The Nigerian Government recognises this and has entered into joint venture agreements since August 2005 for the maintenance of channels and waterways in some of the port complexes. These joint venture agreements executed through the Nigerian Ports Authority include the Lagos Channel Management, the Bonny channel company and recently the Calabar Channel Management. These companies are responsible for the planning and execution of maintenance and capital dredging works within the limits of the ports, the removal of wrecks and bathymetric survey within these channels. The agreements have ensured that Lagos and Bonny channels have up-to-date charts. This work is expected to drive down the cost of freight coming to these ports. However, desspite these notable achievements, much of the country’s territorial waters remain unsurveyed or require survey to a modern standard. Consequently, shipping companies may still see the Nigerian waters as unsafe and base their insurance risk assessment on this factor.

What is the Nigerian Government’s perception of the need of providing adequate charts and nautical information of the sea area under its responsibility?

As a maritime nation, the Federal Government of Nigeria is serious about the safety of seafarers and the maritime environment. It has  ratified and domesticated the SOLAS Convention since 1978. In recognition of its responsibility as a contracting government under Chapter V, regulation 9, of the SOLAS Convention, a proposed bill for the establishment of a National Hydrographic Agency under the Ministry of Defence is presently underway for consideration on the Minster’s table awaiting the President’s consent. The passage of this bill when finally considered would ensure that Hydrographic policies and requirements of the country are properly articulated and Hydrographic operations properly funded to provide adequate charts and nautical information of the nation’s sea areas.

In the above-mentioned interview the Chief of the Naval Staff mentioned that a new survey vessel would be acquired. Can you describe it’s characteristics and it’s probable use?

Drawing from the transformation agenda of the Federal Government of Nigeria and indeed the ongoing transformation process in the Armed forces of Nigeria, the Chief of Naval Staff instituted a transformation plan for the Nigeria Navy. Part of the plan’s strategic objective is the medium term goal of renewing the fleet with the acquisition of four survey boats and four survey launches. The launches would be used to survey the back waters and coastal areas of the Nigerian maritime environment, enabling naval patrol crafts to manoeuvre freely to combat criminal and illegal activities in our territorial waters. The survey boats would be used for hydrographic surveys and oceanographic research from the territorial waters up to the limits of the exclusive economic zone.

The IHO yearbook states that the nautical charts of Nigeria are provided by the Hydrographic Office of the United Kingdom of Great Britain and Northern Ireland (UKHO). Are there plans to set up an independent organisation for nautical chart production? If so, which  organisation, in addition to the UKHO, could cooperate with the Nigerian HO to set up a totally autonomous Hydrographic Office?

Yes, the nautical charts for Nigerian waters are produced by the UKHO. However, there are plans to develop an independent capacity for nautical chart production, which is the third phase of the IHO capacity building initiative. This plan is a long term goal of the Chief of Naval Staff’s transformation agenda of establishing a productive and efficient organisation consistent with the Nigerian Navy Statutory roles.

Nigeria has six main ports. In what has cooperation been established with the Port Authorities to collect and disseminate the nautical information?

The NNHO and the Nigerian Ports Authority cooperate in various ways to ensure a safe maritime environment for seafarers. All maritime safety information collected by the ports authority is forwarded to the MSI facility for dissemination to seafarers and the NAVAREA II Coordinator. In addition, all surveys and ‘as built’ survey of construction works within the port complexes are forwarded to the office to update the nation’s hydrographic database and spread the notices to mariners.

Is the Hydrographic Office also responsible for surveying and charting the internal waterways? If not, what other Authority has that task?

The National Inland Waterways (NIWA) is the agency responsible for the management of the nation’s vast inland water way resources. It is also responsible for the maintenance, dredging and surveying of the waterways. However, all surveys carried out by NIWA are forwarded to the NNHO to update the nation’s hydrography database. In addition, the NNHO may carry out the surveying of any inland waterway for defence and security needs of the nation.

How is the staff of the Hydrographic Office trained?

The NN trains its officers and other staff at both local and  foreign institutions. The Nigerian Navy Hydrographic School (NNHS) currently trains NN ratings in Survey Recorder (SR) courses. However, the NN has initiated efforts to commence a Pre Basic Hydrographic Course for officers at the school as a precursor to an IHO accredited Basic Hydrographic Course. The NNHO has also benefited from various capacity training schemes of the IHO. An officer of the department is taking a Master’s degree in Hydrography at the University of Southern Mississippi sponsored by the Republic of Korea through the IHO. Other officers are currently undergoing both basic and longer hydrographic courses in India, Bangladesh and Pakistan.

How do you see the presence of the private industry in the hydrographic activities? In particular, how do you manage the release of hydrographic data to the industries that produce charts and other nautical products derived from the official data?

The presence of the private industry in hydrographic activities in Nigeria is good for the nation. Their work complements the efforts of the NNHO in the development of hydrography in Nigeria. However, the NNHO regulates their activities and approves all surveys. The companies are also mandated by law to submit all survey data collected to update the Hydrography database.