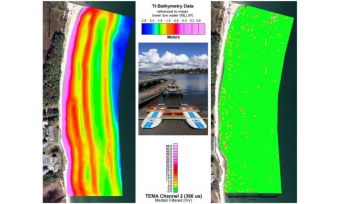 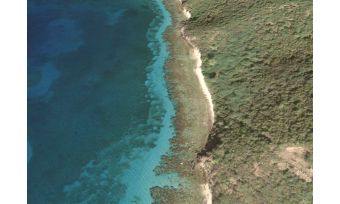 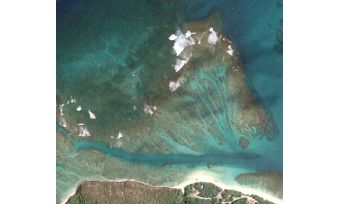 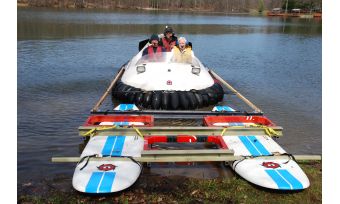 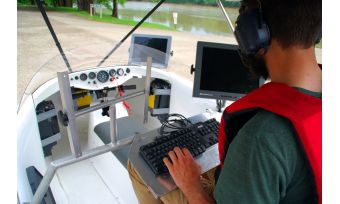 Survey efforts in shallow water present a challenge; when coupled with protected species and critical habitat such as coral reefs, they can prove impossible. Tetra Tech, in conjunction with Neoteric Hovercraft, Inc., has developed an environmentally sensitive survey platform, which now allows for data collection in such areas. The TEMA-Lite (Towed ElectroMagnetic Array) is a hovercraft-based munitions detection system capable of collecting data in areas where previously only more expensive, less sensitive ­ aircraft-based systems were able to perform.

EMA (Towed ElectroMagnetic Array) system has multiple form factors and two deployment types, each with a three-metre swath width. The deep-tow TEMA MK3 operates in 3 to 100 metres of water; the TEMA-Lite operates in extremely shallow water to approximately 40 metres depth.

The system can be configured as a ­surface-floated array or bottom-towed sled. It can be pushed, surface towed, or dragged as a sled behind a small boat, or pushed while rigidly attached to a boat or to a customised hovercraft. When deployed via hovercraft, it increases shallow-water capability. The detector system can be hand-carried and assembled in remote locations.

Tetra Tech’s detection systems were developed based on several decades of Munitions & Explosives of Concern/Unexploded Ordnance (MEC/UXO) detection and remediation for the US Navy, US Army Corps of Engineers and commercial clients. Differentiators include:

Tetra Tech has researched the use of hovercraft for MEC/UXO survey for many years, particularly for use in difficult areas for data collection, such as surf zones and shorelines. A hovercraft allows ingress to areas inaccessible by foot or by conventional watercraft.

Tetra Tech selected Neoteric Hovercraft, Inc. to produce the hovercraft for their system for several reasons. Neoteric is the world’s original light hovercraft manufacturer, with commercial, rescue, military and recreational customers in more than 50 countries.

Additionally, the Neoteric HoverTrek was found to outmanoeuvre other hovercraft, and Tetra Tech’s projects require that increased control. The hovercraft features a patented fly-by-wire reverse thrust system, making it the only model on the market with effective brakes. Neoteric’s reverse thrust system surpasses jet aircraft in efficiency: while most aircraft deliver an average of 18 percent thrust in reverse, the HoverTrek delivers 60 percent. This innovative system enables the hovercraft to fly backward, spin and hover over ice and on swift water. Since it weighs less than 600lbs. (273kg), the hovercraft can be piloted directly to sites or it can be airlifted.

Finally, Neoteric has long expertise in custom manufacturing hovercraft to customer specifications, and the company mandated repeated, extensive testing throughout the customisation of the hovercraft for the survey work.

The customisations incorporated during the manufacture of the hovercraft that was used for the survey include:

The TEMA system has been deployed on multiple MEC/UXO surveys as part of the suite of tools used, including multibeam bathymetry, side-scan sonar, sub-bottom profiling and underwater video. The system has been deployed as surface-towed as well as pushed. An example of data from the surface-deployed detection system is shown in Figure 1. Both the underwater and surface deployments are generally lower vibration than equivalent land-based carts. This yields data with less vibration induced noise.

Tetra Tech will use the hovercraft-based system in the spring of 2015 to conduct Phase 2 of an ongoing MEC/UXO remedial investigation and feasibility study at a Defence Environmental Restoration Programme (DERP) for Formerly Used Defence Sites (FUDS) location in the Caribbean. The site served as an impact range for aerial bombs and rockets, missiles, mortars and naval projectiles from 1903 until 1975. Phase 1 work involved performing an environmental baseline study (EBS) of the site. The purpose of the EBS was to provide information to help characterise the nature and extent of sensitive marine habitats such as coral reefs and seagrass beds and endangered or threatened species within the boundaries of the site. The objective of the EBS field activities was to identify areas and boundaries of sensitive habitat and to determine where towed operations and sampling can be safely conducted without damaging these resources during the follow-on phases of the field investigation. This will include the Phase 2 activities using towed geophysical sensors and the Phase 3 intrusive activities. Underwater investigation activities conducted as part of the EBS consisted of visual observations, boat operations and remote sensing surveys including multibeam bathymetry, side-scan sonar and underwater video.

The entire site comprises 1,030 acres; the area to be surveyed using the hovercraft-based system is more than 200 acres consisting of shallow coral reefs with listed and protected corals. This area was originally excluded from the survey due to the potential for damaging the coral.

For the Caribbean project, Real-Time Kinematic Global Positioning System (RTK GPS) along with the following systems:

In conjunction with Neoteric Hovercraft, Inc., Tetra Tech has created a munitions detection system that will travel where no other watercraft is able to travel and where sensitive habitat is only inches below the water’s surface. By using this system, which hovers nine inches (0.22m) above the surface of water, a MEC/UXO survey can now be conducted in the Caribbean with confidence that the coral reefs will not be harmed.

The hovercraft-based system is also significantly more cost-effective than a helicopter-based system, which is the only other viable alternative. This new system also allows more effective detection of UXO, since a hovercraft travels closer to the items than would a helicopter.

In the future, Tetra Tech plans to use the Neoteric HoverTrek with many other sensor systems, including bathymetric and laser line scanners.

Christopher Fitzgerald, Mechanical and Aeronautical Engineer, is founder/president of Neoteric Hovercraft, Inc., and Hovercraft Training Centers, LLC., as well as founder and past president and treasurer of the HoverClub of America, Inc. For decades he has organised major hovercraft events throughout the world, and is co-author of Hovercraft Technology, Economics and Applications and Light Hovercraft Design.