In hydrography, we are used to working underwater where no positions are available from satellite navigation systems. In other professional fields, experience has shown that position updates from satellites may not always be available, or are potentially incorrect: examples are unintentional jamming of the extremely weak GNSS signals and signal reflections leading to erroneous positions. With a few exceptions, the future of back-up terrestrial positioning systems is uncertain. And there are also applications for which position updates are necessary at higher frequencies than satellite systems can provide for.

The integrity and availability of position updates benefit from inertial navigation technology, which is independent of external signals. The purchase and correct installation of an inertial navigation system, known as INS, is a process that requires considerable knowledge of such high-tech sensors. In addition to the product survey found in this issue, we present an introduction to inertial technology, to help you in getting the most out of an INS.

Inside the case, there are three perpendicular accelerometers, and three perpendicular gyros. This set of sensors is called the inertial measurement unit (IMU). A modern IMU does not contain any moving parts, making it reliable and less prone to failures. This is called a strap-down system. The conversion from the three principal axes of the system to the principal axes of the required coordinate system is done by internal software. 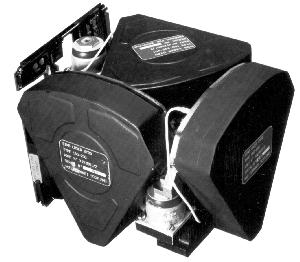 In addition, the gyros do not consist of a fast rotating object, but are based on the interference of electromagnetic beams. There are two technologies: beams are either sent through a fibre optic wire with many circular windings, or a laser beam is reflected until it reaches its own track again. The first technology is called a Fibre Optic Gyro (FOG), the second a Ring Laser Gyro (RLG). If the gyro does not rotate, two beams in opposite directions interfere in a certain way. If rotation is applied, one beam will have a slightly increased wavelength and the other will have a slightly decreased wavelength. This changes the interference of the two beams resulting in an opportunity to measure rotation.

The extremely accurate gyros make the INS expensive. The three accelerometers are cheap and easy sensors, commonly found in, for example, cell phones or game computer controllers. They consist of a weight that can only move in two opposite directions. It is kept in place by a force, often a magnetic field. An acceleration would make the weight shift, if this were not prevented by a change in the magnetic field strength. Such a change is measured, which gives the acceleration.

Once a three-dimensional coordinate system is defined on board of a vessel, the six sensors of the INS are able to determine its rotations (pitch, roll, and yaw) and its accelerations (surge, sway and heave). It is evident that an IMU by itself cannot measure velocity or position. Velocity is calculated by software, adding all the velocity changes (accelerations) to an initial velocity. And position is calculated by adding all the position changes (velocities) to an initial position. In mathematics, such an operation is called integration. The initial inputs could be a zero velocity update at a known position but a better solution is to measure velocity and position continuously. In this way, an INS becomes a device that interpolates between the velocity and position updates.

The quality of the INS output is highly dependent on the quality of the input. Random inaccuracies of the input are solved by the use of a smoothing filter using the internal sensors: if no acceleration or course change is detected, the velocity input has to be constant and the position differences as well. In general, the used filter technique is Kalman filtering. A single outlier or artificial jump in the measured position or velocity is easily detected and removed. In this way, an INS also becomes an excellent device for integrity monitoring. Such an input integrity check is necessary because an undetected gross error, like a single outlier, influences the track for a while. Gross error detection is done with respect to the expected level of inaccuracy of the input as specified by, for example, a standard deviation. If the given standard deviation and the real quality of the data do not match the results could possibly be very unreliable. An example: if the velocity input is poorer than anticipated, the changes in position do not match the velocity enough. The software could conclude that this is due to a position outlier and the position input is rejected. The poor quality velocity input is now able to influence the interpolated positions even more, resulting in an incorrect track. If the position input is suddenly accepted again, the track is corrected to the real position. Such a strong jump in input to an autopilot in a busy shipping track could have serious consequences, for which the INS could incorrectly be blamed. However, if the quality of the input matches the stated accuracy the integrity monitoring algorithms in the filters are generally of high quality. In that case, the user strongly benefits from the filter of the INS as it prevents gross errors and reduces the effect of inaccuracies in the input.

The filter in an INS works with accurate time stamps, giving it an opportunity to also benefit from data that arrives late. The improvement of a previous position or velocity still helps in calculating the next position or velocity. It is even possible to forecast the track. In practice, this means that an INS can estimate its output data in real-time, even before the measurements of that moment have been processed. As always, such an advanced solution is vulnerable. If the timing of the input signal is incorrect or inaccurate, a first consequence is that the forecasts are affected, and a second consequence is that the wrong sensor might be rejected, with potential consequences as stated above. To reduce this risk, the implementation of an INS needs to be done in close co-operation with the manufacturers of the positioning, velocity and timing sensors.

As long as there are regular position updates, the accuracy of the output position is of a constant quality and better than the input. When position aiding stops, position errors build up in time. When the velocity input also stops, the errors in the estimated velocity also build up. The effect of that is a higher rate of deterioration of the quality of position. Therefore, it is strongly advisable to have velocity input into an INS (In shallow water, a Doppler log which measures velocity with respect to the seafloor is preferable over an electromagnetic log which measures velocity with respect to the water). Reduced quality of the output is manageable as long as its quality description is correct. An operation will then be stopped as soon as the specifications are no longer met. A clear description of the accuracy of the INS output is of utmost importance when integrating it into the navigation chain.

There is yet another complication when using inertial navigation, namely, the relevant coordinate system is itself rotating, as it is tied to the rotating Earth. Even if the INS does not move in the coordinate system, it feels the Earth's daily rotation. Fortunately, the Earth's rotation is corrected for. In fact, it helps an INS to determine latitude: at higher latitudes a larger part of the Earth rotation is felt in the horizontal gyro. Thanks to this effect, an INS is able to find its North and subsequently to estimate heading. However, the quality of the position output is negatively impacted when it is used at higher latitudes. This is indicated by the words secant latitude which means that the position accuracy has to be divided by the cosine of the latitude.

In addition, the gravity field of the Earth plays an important role. If the INS is placed horizontally, the full effect of gravity is felt in its vertical accelerometer. This enables the INS to define the horizontal plane which is the reference for roll and pitch. If the INS is only used on the Earth's surface, the INS should know that its vertical acceleration has to be zero, on average, which further helps to estimate the output parameters; especially heave filtering is sensitive to systematic effects. The two vertical gyros are usually more accurate than other roll and pitch sensors on board, so it makes sense to feed the velocity input into the INS in the ship's reference frame, i.e. without prior pitch and roll corrections.

Gravity and Earth rotation effects are present in the position error of INS as rhythmic effects with a frequency of 84 minutes and a day, respectively. The first effect is called the Schuler drift and is the frequency of an imaginary weight that falls through the Earth to the other side. It gains speed until it has passed the center of gravity of the Earth, after which it falls against the direction of the gravity and looses speed. At the other surface, it no longer has any speed and falls back towards its original position, where it returns 84 minutes after its release. The second effect has a frequency of a day. The two effects are caused by small misalignments between the three perpendicular accelerometers and small misalignments between the three gyros respectively. The effects are reduced by a new calibration of the INS.

In conclusion, the complexity of an INS requires an investment in proper engineering in order to avoid some serious pitfalls. This investment is certainly worthwhile as the output is reliable and accurate even if position and velocity measurements are unavailable for a while.

Keep abreast of news, developments and technological advancement in the hydrospatial industry.

We encourage you to subscribe to our weekly newsletter. Subscribers also receive a digital copy of our bi-monthly magazine.

Download this article as a print friendly PDF and receive our weekly overview of the most important geomatics news and insightful articles and case studies.

Ofcourse we encourage you to share this article with your peers if you enjoyed reading it. Copy the URL below or share it on your social media of choice.