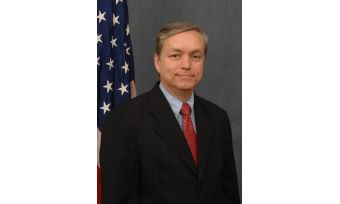 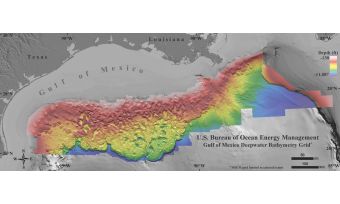 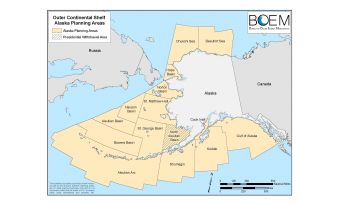 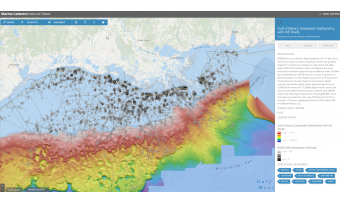 What is the role of maritime geospatial data for BOEM?

BOEM uses maritime geospatial data for a variety of needs. For example, by identifying ocean areas used for various purposes, BOEM’s efforts to understand and deconflict various uses lead to better planning and stewardship of Outer Continental Shelf (OCS) resources across all of our programmes, including oil and gas development, renewable energy development and sand extraction for beach replenishment and coastal restoration. In a second example, maritime geospatial data is used to help with National Environmental Policy Act (NEPA) analysis related to the leasing of areas for such resources. Thirdly, geospatial data is used to define the National Baseline along the coastline of the USA. In turn, the digital baseline is used to generate official offshore boundaries, such as the Submerged Lands Act boundary – which divides Federal and State waters – and the Outer Continental Shelf Lands Act (OCSLA) Section 8(g) zone boundary. This pertains to the distribution of revenues gained from offshore leasing.

How is BOEM receiving geospatial data for its work? Does the organisation have its own hydrographic service?

No, BOEM does not have its own hydrographic service or the ability to directly collect geospatial data. Instead, BOEM contracts out to the private sector or other Federal agencies to collect such data. For example, we have provided funds to universities and private companies to collect hydrographic data (salinity, temperature, currents) on the OCS. The industries that we regulate also collect geophysical data, which BOEM has access to and makes available to the public through the National Archive of Marine Seismic Surveys data portal hosted by the U.S. Geological Survey after the proprietary term expires. At BOEM, we also use public geospatial data that is becoming more readily available through data portals. We then use this geospatial data in our decision-making processes.

In the coming years, where do you expect to find the biggest potential for offshore oil & gas? And how will this be established?

Approximately every five years, we compile an assessment of the undiscovered oil and gas resource potential of all 26 of the OCS planning areas. We use our understanding of known oil and gas fields and accumulations, both on the OCS and from analogous areas around the world, to inform our estimates of the size and location of yet-to-be-found resources. Based on our latest assessment completed in 2016, we project that the Gulf of Mexico still holds the largest potential for offshore oil and gas discoveries in the future. That’s the location of over 50% of the projected undiscovered oil and over 40% of the projected undiscovered gas on the OCS. More specifically, we project that approximately 95% of the undiscovered oil resource in the Gulf of Mexico will be in a relatively deep water environment where oil production is currently at an all-time high. Also, we see the Arctic Alaska OCS as holding significant potential with nearly 30% of the undiscovered resources on the OCS located within the Chukchi Sea and Beaufort Sea planning areas.

How will the Executive Order on Implementing an America-First Offshore Energy affect the way seismic data will be collected and used in the future?

The Executive Order will not affect the way seismic data is collected or used on the OCS. However, implementation of this Executive Order will affect the seismic permit application approval process because it directs the Secretary of Interior and Secretary of Commerce to expedite all stages of consideration of Incidental Take Authorization requests, including Incidental Harassment Authorizations and Letters of Authorization and seismic survey permit applications. Currently, the Department of Commerce – via the National Marine Fisheries Service (NMFS) – has the responsibility for reviewing and authorising Incidental Take Authorization requests and Incidental Harassment Authorizations prior to BOEM-approved seismic activities occurring. In order to comply with the Executive Order and corresponding Secretary’s Order, BOEM and NMFS will work together to establish and implement a plan leading to a more expeditious approach to approving these authorisations, thus reducing the time needed to review permits for seismic activities on the OCS.

What is the biggest challenge in collecting the maritime geospatial information and making it available?

While there are many challenges to making geospatial data available, formatting and download space can be especially difficult at times. Many data products come in formats that the general public or other stakeholders cannot easily input into available GIS software, and such data can be voluminous. Therefore, we and our contractors often need to reformat the data, parse it into smaller packets, and find a public-facing server on which data can be accessed, along with all the necessary security protocols that agencies are required to implement to protect data from unauthorised access.

Does BOEM’s marine geospatial (hydrographic and oceanographic) data have a wider use?

Absolutely. Most of BOEM’s marine geospatial data that is not restricted from public use is made available or linked through our website and MarineCadastre.gov. In addition, the data must be archived at NOAA’s National Centers for Environmental Information (NCEI), which is accessible to the public. BOEM’s geospatial data and other agency data layers are used for marine planning efforts. In practical terms, marine planning provides a public process to better determine how the ocean and coasts are sustainably used and protected – both now and for future generations.

In addition to MarineCadastre.gov, other marine spatial planning portals such as the MARCO Portal, NE Data Portal and West Coast Governors Portal all directly link to geospatial data served by BOEM.

BOEM is the initiator of the Environmental Studies Programme. What is the focus of this research programme?

BOEM’s Environmental Studies Program (ESP) is mandated by Section 20 of the OCS Lands Act to conduct studies that will provide the information needed to assess and manage impacts on the human, marine and coastal environments from offshore energy and marine mineral development. Section 20 specifically calls for studies addressing impacts on marine biota, which may result from chronic, low-level pollution or from large spills associated with OCS production. Section 20 also calls for studies to monitor human, marine and coastal environments. These studies provide time-series and data-trend information for identifying significant changes in the quality and productivity of those environments and identify the causes of any changes. The ESP has provided over USD1 billion for research to this end since its inception in 1973.

Is BOEM collecting oceanographic environmental data on its own, or which other organisations are involved in collecting and/or managing this data?

BOEM is a leading contributor to the growing body of scientific knowledge about the nation’s marine and coastal environment, and we partner with several Federal agencies (e.g. National Oceanic and Atmospheric Administration, U.S. Fish and Wildlife Service), and State and local governments, as well as other stakeholders (e.g. universities, tribal partners) to achieve this goal. All BOEM ESP study products and data are managed in ESPIS (https://marinecadastre.gov/espis/#/). This geospatial data viewer enables users to discover all ESP studies ever conducted and provides web links back to other agency websites where data can be found.

The emphasis of the Executive Order on Implementing an America-First Offshore Energy is on hydrocarbon energy sources. What is the potential of tidal and wave energy for the United States?

At this time, offshore wind technology is more commercially viable than offshore wave and current technology. In fact, offshore wind energy offers significant benefits for the USA. Using existing technology, there is a technical potential of over 2,000GW of offshore wind resource capacity accessible in US waters. This is equivalent to an energy output of 7,200 terawatt-hours per year – nearly double the total electric generation of the USA in 2015. We are on our way toward achieving such potential. To date, we have awarded 12 offshore wind renewable energy leases, soon to be 13, with over 15GW of capacity: enough to power over five million homes. These leases will serve as a strong foundation to develop an offshore wind industry in the USA.

With regard to wave and current energy, if an interested party submits an application for an ocean wave or current project, BOEM will determine whether such a proposal has promise. If so, we could decide to move forward with processing the application.

The coastal states see various ways of developing renewable energy, yet some (like Texas and Louisiana) don’t seem to have any plans developed for renewable or wave and tidal energy generation. Will they be encouraged to do so?

At BOEM, we manage offshore energy and marine mineral resources in an environmentally and economically responsible manner. This includes providing responsible access to offshore renewable energy resources, and were BOEM to be approached by an interested state or potential developer, we would work closely with our diverse stakeholders to evaluate future potential projects.

How is BOEM working with similar organisations in neighbouring countries on efforts for maritime geospatial and environmental data?

We work with our counterparts in Mexico and Canada and through multilateral efforts such as the International Offshore Petroleum Environmental Regulators to exchange information regarding environmental issues associated with offshore oil and gas. For example, regarding Mexico, BOEM signed a Letter of Intent with the Agency for Safety, Energy and Environment (ASEA) in October 2016 to strengthen cooperation, coordination and information-sharing on environmental matters related to offshore hydrocarbon activities in the Gulf of Mexico. BOEM and ASEA are in the process of identifying areas that would be particularly appropriate for greater coordination. In March 2017, BOEM and ASEA participated in the Gulf of Mexico Workshop on International Research. The workshop identified knowledge gaps regarding marine ecosystem science, prioritised relevant research needs and intensified relationships between individuals and organisations working on marine science issues in the Gulf of Mexico.

As deputy director, and currently acting director, of BOEM, Dr Walter Cruickshank oversees the administration of programmes that manage the development of the USA’s offshore resources in an environmentally and economically responsible way. These programmes include leasing, plan administration, environmental studies, analysis of the National Environmental Policy Act, resource evaluation, economic analysis and the Renewable Energy Program. Prior to becoming the deputy director of BOEM upon its establishment in October 2011, Dr Cruickshank had served as deputy director of the Bureau of Ocean Energy Management, Regulation and Enforcement (BOEMRE) and the former MMS since 2002. Dr Cruickshank has worked in the Department of the Interior for more than 30 years. He earned a bachelor of arts in geological sciences from Cornell University and a doctorate in mineral economics from the Pennsylvania State University.