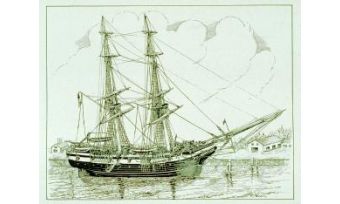 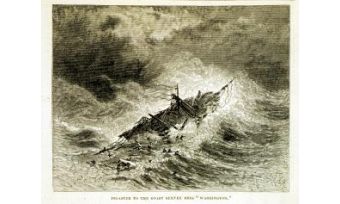 Although nineteenth-century hydrographic ships usually worked in close proximity to ports and the relative safety of inshore waters, in 1845 Alexander Dallas Bache, the second superintendent of the United States Coast Survey, embarked on a project to systematically study the Gulf Stream including measurements of current velocity, temperatures at the surface and at depth, depth of water, chemistry of the water and other associated parameters. He sent the Coast ­Survey brig Washington to conduct these studies. Although much of this effort involved developing instruments and methods, a successful transect was run to the southeast of Nantucket Island.

In 1846, Bache again sent the ­Washington to study the Gulf Stream. This expedition was under the ­command of his brother, Lieutenant George Mifflin Bache. At first glance, this would seem to be nepotism; but both George Bache and another brother, Richard Meade Bache, had been attached to the Survey since 1838, and were amongst its most ­senior naval officers.

The first 1846 cruise of the ­Washington covered one transect of the Gulf Stream extending 400 miles offshore to the southeast from Sandy Hook. This cruise resulted in the discovery of the ‘cold wall’, the relatively abrupt boundary between the distinctly colder inshore waters and the much warmer waters of the western edge of the Gulf Stream. In a letter dated 5 August, George wrote his brother: “I would like to be with you when you look at and admire this section, as admire it you must, and speculate on it together. Here on the left we have the main current of the stream turned to the eastward, by Cape ­Hatteras, and butting up against a bank of cold water, which it overflows, and on the right mingling with a vast reservoir of warm water, which is probably brought there from the eddies from the stream itself. How beautifully the line is defined to the left or westward....”

Prophetically, Lieutenant Commanding Bache finished his letter: “... we feel that we have to be very careful of her in heavy weather. A good hard gulf sea would rack her very much.” George Bache was quite aware of the danger the Washington would face in heavy weather.

The last letter that George Bache wrote to Superintendent Bache was dated 12 August 1846. He noted that at his southeastern-most station he encountered a westerly current in warm water after passing the main body of the Gulf Stream. He attributed this to an eddy current which was associated with the Stream. He spoke once again of the cold wall which he hoped “to find permanent, uninfluenced by the seasons,” as this would be a marker to help navigators ascertain their position. By 16 August, the Washington was working to the southeast from Cape Henlopen, Delaware. This transect was finished on 27 August with a new line begun on 29 August another 150 miles to the south. This line ran to the northwest towards Cape Henry, Virginia, and was finished on 7 September.

While finishing the last station at noon on 7 September, the Washington experienced moderate breezes from the northeast with cloudy weather and a heavy swell from the southeast. After completion of the last station at 2:00 pm, the Washington made sail for Cape Henry, only about 60 miles distant. Unfortunately, the ship passed a little to the north of the bay entrance as at 11:20 pm Smith Island was sighted. The ship then made for Cape Henry. The ship’s log for 8 September 1846 reads:

“Commenced with a fresh breeze from the E. NE., with thick and squally weather; at 12h. 20m. Smith’s island light bore NW. 1/2W; lost sight of it immediately afterwards; at 2 hauled up NW., called all hands and took two reefs in the topsails; at 2h. 30m. discovered land under the lee; wore ship to the southward and eastward, hauled on a wind, reefed and set the mainsail; got a cast of the lead in five fathoms water; at 3 pitched away the jib boom, and commenced clearing away the wreck.

“From 4 to 8, heavy gales from the northward and eastward; thick haze and rain, with a heavy sea on: at 5h. 30m. the brig much pressed -- took in and furled the foretopsail: at 6h. 30m. hauled up the foresail, clewed down the main topsail, split the foretopmast staysail: both the starboard boats filled and tore away from the davits; got the wreck of the jib and flying booms on board: at 8 called all hands: from 8 to meridian heavy gales from the northward and eastward, thick mist and rain: at 8h. 30m. carried away the main yard in the lee quarter, clewed up and furled the main topsail and set the fore trysail, with the bonnet off; bent a new main trysail, reefed and set it; carried away the gaff and both weather boats from the davits: at 10, blowing a hurricane, the water above the lee rails most of the time; hove overboard both of the lee guns, and cut away the mainmast, which brought the foretopmast, the fore yard, and the head of the foremast with it, leaving them hanging up and down the mast; got her before the wind, and hove overboard the two larboard guns; sounded in eight fathoms water, not able to see a cable’s length ahead; the tops of the seas blowing completely over and on board of us, the men clinging to keep from being washed or blown overboard. At 11 let go the stream anchor, with a 6 ½ inch Manila hawser, 180 fathoms in length, bent to it, in order to bring her head to the wind, for the purpose of anchoring. At 11h. 10m., while in the act of letting go the starboard anchor, shipped a heavy sea amidships and on the quarter, sweeping the deck fore and aft, and carrying with it the poop cabin, and nearly all the officers and men. She partly righted; all succeeded in getting on board again, with the exception of George M. Bache, Lieutenant Commanding, James Dorsey, Benjamin Dolloff, and John Fishbourne, quartermasters, Henry Schroeder, sail maker’s mate, Francis Butler, Lewis Maynard, Thomas Stamford, and William Wright, seamen, and Peter Hanson and Edward Grennin, ordinary seamen. On regaining the wreck, manned the pumps, cut away the foremast, and let go the starboard anchor, which brought her head to the wind; found the tanks, chains, kentledge, and everything in the hold, had shifted, ripping up the berth deck; cleared away the chain and run it out to the bitter end; at the same time employed heaving overboard the kentledge and shot. The brig gradually righted; the gale abating, she rode to her anchors.”

The last anyone saw of George ­Mifflin Bache, he was holding on to part of the cabin as if stunned. He had no marks on his face and his arms were over the flotsam as if resting while his head was turned and looking toward the brig. The observer, Mr. Ricketson, who was a civilian pilot accompanying the cruise, saw a tremendous sea crash over Bache and then had the same sea come over him on the ship. He never saw Bache again. The surviving officers of the vessel praised Bache: “During the trying scenes which preceded his loss, his coolness and decision were remarkable: everything that seamanlike skill could effect for the safety of the ­vessel he accomplished. He appeared never to think of himself, but, with his ­characteristic solicitude for the performance of his duty, only of ­preserving what related to that upon which he had been engaged during the cruise.”

The next year, the final work of George Bache for the Coast Survey came to an end. Drift bottles had been added to the regimen of observation ­techniques in 1846 and a bottle tossed overboard from the Washington in the axis of the Stream on 31 July 1846, was picked up on the coast near Kerry, ­Ireland, on 27 June 1847.

A monument stands today in the Congressional Cemetery in ­Washington, D.C., consisting of a broken mast inscribed with the names of Lieutenant Commanding Bache and the members of the crew who died in the hurricane of 8 September 1846. These men were amongst the first in the United States to lose their lives in the pursuit of scientific knowledge.