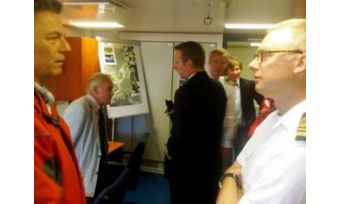 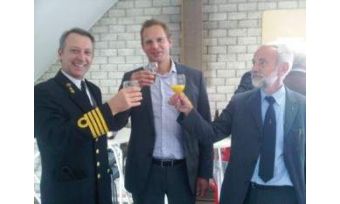 Celebrations for WHD and 25 Years NHI
World Hydrography Day and the 25th year anniversary of the Netherlands Hydrographic Institute were celebrated during the Hydrographic ­Society Benelux workshop on 21 June 2011 in Scheveningen, the Netherlands. The theme of the workshop was ‘The Human Factor', reflecting the inter­national focus of the International Hydrographic Organization.


Before the workshop, the delegates could take a guided tour on Hr Ms Snellius a hydrograhic vessel of the Netherlands Royal Navy and on the Zirfaea, a hydrographic vessel of Rijkswaterstaat. Mark Heine (Fugro) contributed on the characteristics of the upcoming professional population, Erwin Leijs (Geo.XYZ) explained how the company was growing and which implications this had regarding human resources and management and Mark Pronk (Marine Geomatics) focused on outsourcing as another way to optimise the business processes.


Following these presentations, Erwin Wormgoor gave a presentation on the co-operation between the Hydrographic Service of the Netherlands Royal Navy and Rijkswaterstaat, Netherlands Hydrographic Institute, that has existed for 25 years. This service co-ordinates the use of hydrographic vessels, the planning of re-surveying and co-ordination of survey and data standards. Even more emphasis will be put on this in the future.

The next workshop will be at the BLAST conference in Ostend, Belgium, on 22 and 23 September 2011.