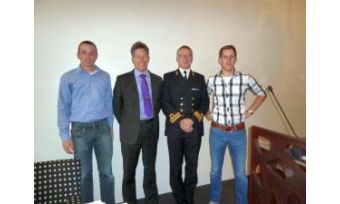 Workshop on Data Quality
About 60 members joined the workshop on Data Quality in Hydrographic Surveys which took place on 11 April 2012 at the venue of Kivi Niria, the association of engineers in The Hague, The Netherlands. Auke van der Werf MScE (Rijkswaterstaat) gave a presentation outlining the framework of how the organisation secures the quality of collected data when sourcing a surveying company and defining projects. He made the delegates aware of the many factors influencing the quality of the data and how they reduce uncertainty. The aim is to see that bathymetric data is indisputable when collected, but also in the future. John Loog MSc (Hydrographic Service) took the stage and showed how the Navy performs quality checks after the survey. He gave real-life examples on how bathymetric data collected during a survey are compared to data of earlier surveys, cross-survey, external databases and even charts to discover irregularities or errors.

A lively discussion on practical issues involved in checking the data was scheduled and the delegates took the opportunity to dig deeper into the matter.

Every year, the Hydrographic Society Benelux gives an award for the thesis of students and gives them the opportunity to present their findings. Tjalling van der Horst presented the paper he prepared with Peter Mulder on silt survey data in the port of IJmuiden by integrating the data collected with a DensiTune. For dredging company Van Oord they studied the behaviour of gases in the navigable silt layers and visualised the findings in the OpenEarth application.

The workshop was concluded with the Annual General Meeting.

Hydro12 Confirms Keynote Speakers and is Open for Registration
The organisation of the conference Hydro12, to be held from 13 to 15 November 2012 on board of the SS Rotterdam in Rotterdam, The Netherlands, is on steam. A total of 66 abstracts have been submitted, promising an interesting programme of presentations and posters. Three keynote speakers have been confirmed. The line-up shows Peter Harris (Australia), involved in the GeoHab programme; Steve Shipman MBE, who was vice-president for the IHB and before that, involved in the joint IHO / FIG / ICA Advisory Board on Standards of Competence for Hydrographic Surveyors and Nautical Cartographers; and Terje Torsens of Geological Survey of Norway. His current area of expertise is within marine geology, with emphasis on seabed sediments and morphology, links between geology and biology within an ecosystem framework, and applied aspects for ocean management.

Registration is now open and delegates are offered a discounted fee until 1 July 2012. The SS Rotterdam also includes a hotel and for delegates of Hydro12 attractive fees have been negotiated.

When registering, it is also possible to join the excursions on Friday 16 November 2012. They will take you to the land reclamation project Maasvlakte 2 extending the Port of Rotterdam and the Sand Engine, a sophisticated sand supply project for the coast of the Netherlands. If your partner would like to join you for the conference, he or she can participate in the partner programme which promises to take them to interesting places in Rotterdam and the Netherlands.
For all information, updates and registration, please visit the conference website.