HSB Workshop - AUVs and Other Matters 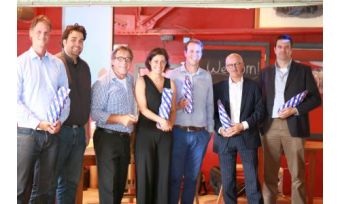 On 29 August, the HSB organised an afternoon workshop in Delfshaven, Rotterdam. The workshop was planned on this day as an addition to the scheduled series. The theme of autonomous propelled vehicles was expanded somewhat as Hydro International announced that its September issue would also focus on AUVs.

The open presentation room on the upper level of the historic shipyard Rotterdams Welvaren has now been used twice. A total of almost 60 HSB members were present.

The workshop was very lively with six very different presentations. First, the search for Malaysian Airways flight MH370 in the Indian Ocean, was presented by Fugro manager Rob Luijnenburg. Advanced equipment will be mobilised to deploying AUVs for reconnaissance and deep-tow acoustic equipment (on a 10km-long tow cable) for high-resolution mapping. If the aircraft is found, its wreckage will be spread out, making it very difficult to spot.

The two other presentations before the break were about AUVs and drones, programmable geomatic sensors below and above the sea surface. The Kongsberg range of six AUV families was shown by Richard Mills from Kongsberg Maritime. He focused on the use of AUVs in shallow water, less than 20m, and the associated pitfalls. HSB board member and nautical lecturer Helga van Noten presented the Master graduation work of Dominique Clybouw on drones. She showed the various classification types and explained the status of Belgian and Dutch legislation when using drones and the liabilities for the user. This invoked a discussion during the break as drones may be obtained very cheaply indeed, e.g. by 3D-printing.

After the break Michiel Munnik and Bart Root of TU Delft invited the audience to revisit the breakthrough of marine gravimetry as a means of improving our knowledge of the shape of the earth by Prof. Dr Ir F. A. Vening Meinesz in the 1930s. He was the first to show in gravimetric results that the earth resembles a somewhat oblate sphere due to mass thrown away from the rotation axis. The research on the work of Vening Meinesz does need additional funding. The HSB is considering a contribution.

Then Rob van Ree showed his private little ROV. Inspired by a TED talk he obtained an OpenROV building kit, costing less than USD1,000. The unit can work up to 100m (also in depth) from the operator. It has now been decided to introduce the building and operation of this small ROV into the course programme of Ocean Technology on Terschelling.

The final presentation was by Frans Nijssen of CARIS BV, who presented the educational surveys and invited undergraduate students from Terschelling for a one week lake survey, whereby various suppliers freely provide the necessary resources. The survey has now been held twice, with great success, resulting in a professional chart that was presented to local authorities. Particularly worth mentioning is the PDOK website on which the Dutch national authorities have put a
wealth of geomatic datasets and spatial information available to the general public.

The presentations will be documented on the website hydrographicsocietybenelux.eu.

Two more HSB workshops have been scheduled for 2014, one around Hydro14 (28 - 30 October in Aberdeen), one on 30 September together with CEDA at Van Oord in Rotterdam, and one on a Friday in December together with NIN, location yet to be decided.