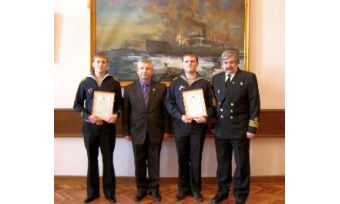 The HSR continues to award the Society's Honourable diplomas to the best graduates of educational institutions in hydrography.
In the summer of 2010, after a presentation by the commander of the Navigating hydrographic faculty of the St. Petersburg Naval Institute, the graduate Sultan Karibov was awarded the Honourable Professor A.P. Belobrov Diploma (specialisation hydrography), and Roman Kalisnikov was awarded the Honourable Professor V.A. Snezhinsky Diploma (specialisation hydrometeorology).
On 25 February 2011, in solemn conditions during a graduation ceremony in the Arctic faculty of the Admiral Makarov State Maritime Academy (AMSMA) in St. Petersburg, the HSR secretary Valentin Smirnov handed the Honourable Professor A.P. Belobrov Diplomas over to the graduates Serguey Chabanenko and Artem Filippov. He wished all the young hydrographers success in their professional work.

In 2010, the AMSMA Arctic faculty celebrated its 75th anniversary. A new textbook Foundation of acoustics and application of the hydrographic sonars was prepared for this event and issued by the Sea hydrography department of the faculty. The various lectures given from 2005-2009 by the author, HSR member professor Yury Firsov, served as a basis for the publication.


The author goes into great detail on the use of multi-beam echo sounders. The principles of multi-beam bathymetry and models of aprioristic errors are dealt with. A separate chapter is devoted to practical problems. The appendix includes an explanatory dictionary of hydroacoustics and hydrography terms, and also internet site addresses giving modern hydrographic information.