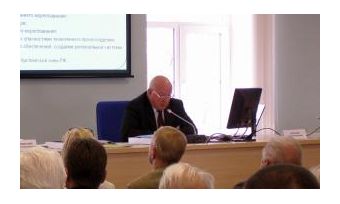 The 7th Russian Scientific and Technical Conference, with the title ‘Navigation, Hydrography and Oceanography: priorities of development and innovation of maritime activities (NHO-2011)', took place in St. Petersburg from 18 to 20 May 2011.

The Hydrographic Society Russia (HSR) organised this conference together with organisations such as the State Research Navigation and Hydrographic Institute, (GNINGI), the Department of Navigation and Oceanography, Ministry of Defence of the Russian Federation (DNO), the Maritime Board at the Government of the Russian Federation, the Maritime Council at the St. Petersburg Government, and the joint-stock scientific company ‘Marine technologies and safety'.

General director of GNINGI, HSR member, prof. Serguey P. Alekseyev (image above) was chairman of the conference. In his statement at the first plenary meeting he mentioned that the basic purpose of the conference was to discuss the fundamental and applied aspects of navigation and hydrographic maintenance in sea activities of the state.

Not only experts from Russia took part in the conference; the 223 experts present came from, among other, Ukraine, USA, Great Britain, and Finland.

A total of 142 reports were presented and discussed, covering the following topics

- Means and methods in hydrography, sea cartography and geophysics;

- Application of potential of navigation

and hydrographic and oceanographic maintenance - an innovative factor for development of resources on continental shelf.

Reports were presented by 21 HSR members. Many of them have been devoted to research in Arctic regions. The big interest was caused by the reports of HSR members including prof. E.S. Zubchenko and his report About an opportunity of an establishment of a uniform readout surfaces of depths in interests of navigating safety, G.V. Makarov's report Rejection of gross blunders of measurements. Revival of the conditional equations, and K.G. Stavrov's report Hydrographic and geophysical research for substantiation of external borders of the Russian Federation continental shelf in Arctic ocean.

Reports presented by the US representatives Kreig MacLinn (NOAA), Lourens Alan Mayer (University of New-Hampshire) and Kevin R. Wood (NOAA) resulted in much interest among the participants.

It is pleasant to note that, on the whole, the content of the reports was of a high quality, with many new facts and ideas and uses being mentioned.

The reports presented at the conference have been published in The collection of the VII NHO-2011 works.

The banquet which took place at the end of the conference allowed participants once again to discuss interesting problems but in a more informal environment.