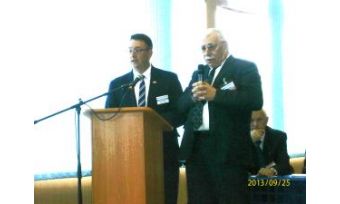 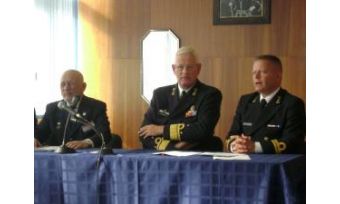 The 12th International exhib­ition ‘Neva - 2013’ took place in Saint Petersburg from 25 to 27 September 2013. Within the framework of the exhib­ition, the International Conference ‘From polar convoys of the Allied Nations to modern international cooperation in Arctic regions’ took place at the initiative of the Regional Public Organization (RPO) ’Polar convoy’ and publishing house Sea heritage.

About 100 representatives from state and public organisations, including a group of HSR members, took part in the conference. The oldest polar explorer of Russia, Mr. V. Dremljug (95 years old), was an honoured participant of the conference.

Director of AMVER service (the US Coast guard), Benjamin Strong, gave a talk about the activities of the International Arctic council and cooperation in Arctic regions.

Other reports included: The Role of the North in modern geopolitic conditions (the Krylovsky Science Centre Valery Polovinkin), The Role and a place of polar convoys in a sea heritage of Russia (president of the Arctic academy Valery Mitko), The Russian drifting stations and their role in international research in high-altitude Arctic regions (the chief of the high-altitude Arctic expedition of the Arctic and Antarctic scientific research institute Vladimir Sokolov). In add­ition, reports concerning hydrographic maintenance of oper­ations, and professional training for international cooperation in Arctic regions were presented.

A summary of the report Polar expedition on ice breakers Taimyr and Vaigach in 1910-1915. A sight from the present was also given.

The photo exhibition Russian expedition in Arctic ocean on ice breakers Taimyr and Vaigach opened the Earth Emperor Nikolay II was devoted to the same expedition. Participants could also familiarise themselves with the exhibition The History of Arctic regions on a book shelf published by the Sea Heritage.

The Conference was interrupted by a group of Royal Netherlands Navy seamen who arrived in St. Petersburg on the frigate De Seven Provincien and the patrol ship Frisland. Royal Netherlands Navy commander-in-chief vice-admiral Matthieu Borsboom gave a short speech, was photographed with veterans, presented the PRO Polar convoy with an emblem and invited participants of the conference to visit the flagship.

Participants of the conference accepted the Resolution in which it was particularly emphasised that “historical experience of international cooperation when studying and the development of ­Arctic regions deserves the special attention of the interested parties and forms a real basis for overcoming some of the contradictions in world politics on the basis of mutually advantageous cooperation and prevalence of interests of mutual economic and technological benefit over contradictions of a geopolitical nature”.