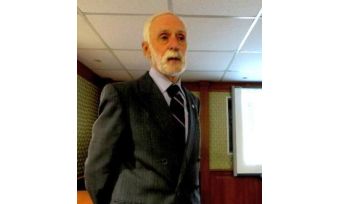 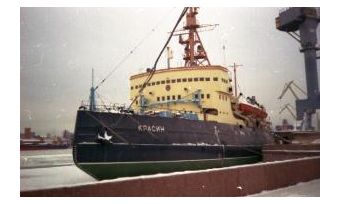 On 1 November 2013, more than 50 people gathered on the ice breaker Krasin to participate in polar readings on the theme: Severnaya Zemlya: opening, research and the present. This was to celebrate the 100th anniversary of the scientific feat of Russian Hydrographic expedition of the Arctic Ocean (HEAO) on icebreaking steamships Taimyr and Vaigach under command of Boris Vilkitsky. The readings were organised at the initiative of HSR and under the direction of the museum ’Ice breaker Krasin ‘ (St. Petersburg branch of the World Ocean Museum in Kaliningrad).

HSR Secretary, Valentin Smirnov, gave a presentation of the basic report ‘Opening of Severnaya Zemlya: history, events, people, using plenty of slides’. HSR member, Irina Tikhomirova, gave an interesting talk on the Vilkitsky family, and showed a number of unique photos and documents from the family archive. Related to this, Olga Petrova talked about letters that the Boris Vilkitsky family sent to her grandfather, admiral I.K. Grigorovich. Scientific employee of the Russian State Arctic and Antarctic museum, Jury Vinogradov, gave a talk on the scientific and practical preparations of participants of the Hydrographic expedition in Arctic Ocean. The head of the cartographic department of the Russian Academy of sciences library, O.A. Krasnikova, reviewed the unrealised research projects of the Imperor Nikolay II Land (now Severnaya Zemlya) in 1914-1928. Scientific employee of the Shirshov Institute of Oceanology, Maola Ushakova, gave a presentation on the work of her father and his comrades on Severnaya Zemlya in 1930-1932.
Honoured HSR member Viktor Rybin presented the report Severnaya Zemlya and Imperor Nikolay II Land. Pro and contra. He insisted on the necessity to return the initial historical names of the archipelago - the ‘Imperor Nikolay II Land’ and the island ‘Tsesarevitch Alexey’ onto charts. To support this proposal he called upon everyone to sign a collective letter to the President of the Russian Federation.

The chief of the High-altitude Arctic expedition, V.T. Sokolov, talked about future research at the permanent ice base ‘Cape Baranova’. Of general interest was the emotional story by the chief of the ice base ’Cape Baranova’ from 1983-1996, V.V. Baranov, who talked about the activities of the scientific station on Severnaya Zemlya and the organisation of polar tourism.

At the end of the session, interested participants were able to view the exhibition created about the ice breaker, devoted to HEAO activity in 1910-1915.

At the same time, participants supporting Victor Rybin’s proposal signed the letter to the President of Russia.