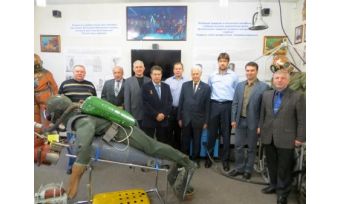 The visitors were welcomed and accompanied by the head of the company, Mr. A. Melnikov. Firstly, they had a look around the Marine museum in Kronstadt, which was founded with the help of the company’s own resources and was opened in May 2012. The museum is housed in a historical 19th century building. This house belonged to the well-known merchant, M. Britnev, who founded a private ­Diving school in 1869.

The HSR members showed great interest in the exhibitions of the museum. The exhibitions are situated in three halls: the main hall is devoted to the ­history of ­diving in ­Russia; exhibits in the second hall focus on WWII and
the ­blockade of Leningrad; and the third hall houses the library.

The visitors then moved to Lomonosovtown. Special equipment and ­technical resources were presented here, including hydrographic boats, vibrating samplers, bathometers, diving gear and navigating equipment. Mr. A. Melnikov spoke about the company’s achievements; he noted that the company has a staff of 180 experts working all over Russia, from ­Sakhalin to ­Kaliningrad and from ­Murmansk to Sochi.

The hydrographic department is the largest in the ­company. The department ­carries out complex hydrographic research projects aimed at ensuring safe navigation. To perform this work multibeam sonar, sonar profilograph, sonar side-scan and sonar scanning, and towed magnetometer are used.
There are long-distance control underwater devices available to perform various underwater operations. Of special interest was a simulator for training the operators of underwater vehicles. The software makes it possible to create the most complex conditions.
The company’s engineer, an HSR member, P. Tarasenko, gave a presentation on the performance of complex hydrographic projects using normative and technical documents and manuals. HSR president, Dr. N. Neronov, and HSR vice-president, Dr. N. Nesterov, participated in the discussions on these issues.

The meeting proved to be ­productive and took place in a friendly atmosphere. It will undoubtedly have a ­positive effect on practical activities.