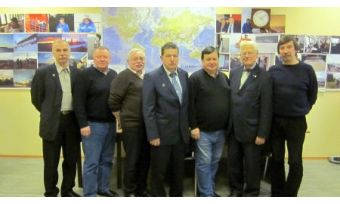 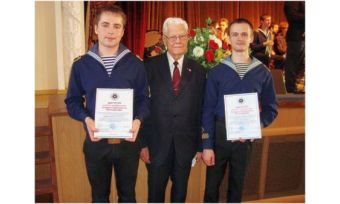 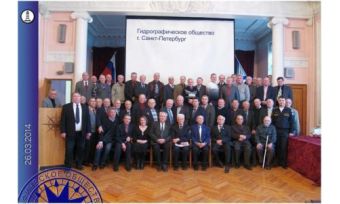 Company Visit to Sevzapgidroproekt
A delegation of HSR members, headed by president N. Neronov, visited Sevzapgidroproekt. Chairman of the Board of Directors, Yuri Yushkov, gave a detailed talk about the company. Sevzapgidroproekt was founded in 2000 by a group of hydrographers, engineers, surveyors, geologists, marine cartographer and submarine cable operators. The team currently consists of about 30 people.

They also have two specially equipped boats and a hydrographic collapsible pontoon for drilling to perform research in the area of the Gulf of Finland.
For the first time ever a company carried out more than 6,000 linear kilometres of unique complex engineering research on board the ice-class vessel Kola that followed in the wake of atomic-powered icebreaker Soviet Union in the Russian Arctic Seas - Barents, Kara, Laptev, East Siberian and Chukchi.

Sevzapgidroproekt is active in a vast area from Africa to the Arctic and from Chukotka to Kaliningrad.

Graduation Ceremony
The ceremony of graduates took place at the Admiral Makarov State University of Marine and River Fleet on 28 February 2014. There were a total of 45 hydrographers present, of whom 9 were girls. Four graduates obtained a degree with honours. The Hydrog­raphic society ­president Nikolay Neronov awarded the Belobrov diplomas to Boris Kornilayev and Michael Burov. There were many guests at the ceremony: parents, representatives of shipping companies and firms. Most graduates are already employed and after the ceremony they went back to work.

Annual General Meeting
The 21st General meeting of the Hydrographic society was held at the Head Department of Navigation and Oceanography on 26 March 2014. The report was presented by the ­president Nikolay Neronov. In addition, the chairman of the Audit Commission V. Bahmutsky presented a report. V. Ustinov, V. Rybin, V. Panteleyev and the executive secretary V Smirnov participated in the debates on the report. This was followed by the election of the board. The result of the secret ballot was as follows: Dr Nikolay Neronov was again elected as president, Dr Nikolay Nesterov as vice-president, and Dr Valentin Smirnov as executive secretary. Andrey Leonov, Nikolay Lozovsky, Eugene Medvedkin, Alexander Kharlamov and Dmitry Schennikov were elected as members of the board by the open vote.

In addition, new members of the society were appointed: Vadim Kargayev (Divnogorsk, Krasoyarsk district) and Alexey Yevseyev (St. Petersburg). A photography session was followed by a reception.

85th Birthday of HSR President Neronov
The Hydrographic society president Nikolay Neronov celebrated his 85th birthday on 31 March 2014. On this day many people congratulated him at his main place of work – the State Scientific Research Institute of Navigation and Hydrography, where Mr. Neronov has been working for 50 years. Vladimir Tytlyanov, the deputy director of the Institute gave a speech in his honour. Andrey Sharkov, head of the Hydrology, Geodesy and Geophysics department, and member of the Hydrographic society also gave a speech. Many representatives of various companies also gave speeches: A. Popov (Chart-pilot), V. Dzyuba (Marine Navigation Systems), Yu. Yushkov (Sevzapgidroproekt), V. Smolin (Marine Technology and Security) and also representatives of the scientific and educational institutions: the Ukrainian National Academy of Sciences (A. Gonchar), the Admiral Makarov State University of Marine and River Fleet (delegation of three representatives), the Higher Attestation Commission of the Ministry of ­Education and Science (V. Polovinkin), Peter the Great Marine Corps (K. Rukhovets and Yu. Zubritskiy).

N. Nesterov and V. Smirnov ­presented Mr. Neronov with an Italian globe bar on behalf of the Hydrographic Society.